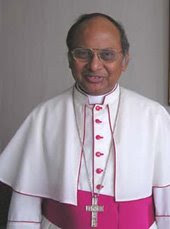 We have not heard a lot from Archbishop Malcolm Ranjith lately, but I just came across this English translation of an interview he did with the Italian Newspaper La Repubblica on 31 July, 2008. The interview was conducted by Marco Politi.

The signal was unmistakable. First, it was seen on Corupus Christi in Rome; then it was seen by the whole world in Sydney. Benedict XVI requires that we he gives Communion, it be received while kneeling. This is one of the many things that this Pontificate has recovered: the use of Latin, the Tridentine Mass, the celebration of the Mass ad orientam, and so forth.

Pope Benedict - the former Cardinal Ratzinger -has a plan, and Archbishop Malcom Ranjith summarizes it well.

Giving more attention to the liturgy, Ranjith explains, hs the objective of promoting 'openness to the transcendent.' At the request of Benedict XVI, a Comendium on the Eucharist is being prepared to help Priests in the 'worthy celebration of Eucharistic Adoration.'

Does receiving Communion while kneeling move in this direction?

R: There is a feeling, a need to recover the sense of the sacred in the liturgy, especially in the celebration of the Eucharist, because we believe that what takes place on the altar goes much farther than what we can humanly imagine. Therefore, the faith of the Church in the Real Presence of Christ in the Eucharistic species must be manifested through appropriate gestures and behaviors that are different from those of daily life [Which goes against the conventional wisdom that says we must incorporate gestures from daily life in order to make the liturgy more accessible].

Should we show that we are in the presence of something different?

R: We are not standing before a political leader or a modern celebrity, but before God. When the presence of the eternal God descends upon the altar, we must place ourselves in the best posture to adore Him. In my native culture, Sri Lanka, we must bow down with our heads to the ground, as the Buddhists and Muslims do when praying.

Does giving the Sacred Host in the hand diminish the sense of the transcendent nature of the Eucharist?

R: In a sense, yes. It disposes the communicant to sense the Eucharist almost as if it were just bread. The Holy Father often speaks of the necessity of safeguarding the sense of 'otherness' in every liturgical expression. The gesture of holding the sacred Host and placing it in the mouth ourselves, instead of receiving it, reduces the profound meaning of Communion [This is interesting. Most arguments against Communion in the hand center on the issue of particles left over and it being sacriligious, etc. Ranjith seems to be saying that there is another danger - symbolically, the simple act of holding the Host and self-communicating, even if in theory it could be done without any particle problems, still sends the wrong message. We feed ourselves with our own hands with regular food all the time - Communion should be different to accentuate the reality of Lord's presence. Self-communicating symbolically says, "This is just like everything else I put into my mouth with my hands"].

Is there a plan or an intent to counteract the process of secularizing the Mass?

R: In some places, the sense of the eternal, the sacred, or the transcendent is being lost. In the past, there has been a tendency to put man - and not the Lord - at the center of the celebration. But the Second Vatican Council speaks clearly about the liturgy as 'actio Dei, actio Christi.' Instead of that, in certain liturgical circles, whether because of ideology or because of a certain intellectualism, the idea has spread of creating a liturgy adaptable to various situations, in which we must leave room for creativity so that it may be accessible and acceptable to everyone. Then also there are those who have introduced innovations without respecting the sensus fidei and the spiritual sensibility of the faithful.

The modern danger is the priest thinking he is at the center of the liturgical action. The Mass is not theater, nor the priest a TV host. The celebrant sees that the people look at him as if he were the point of reference, and there is a risk that, in order to have the greatest success possible with the public, he make up gestures and words as if he were the central figure.

What would be the correct attitude for the priest?

R: When the priest knows that he is not the central figure, but Christ. Respect for the liturgy and its rules, in humble service to the Lord and the Church, as something received and not invented, means leaving greater room for the Lord so that, through the instrument of the priest, He can enkindle the faith in the mind of the faithful.

It is a year now since the full reintroduction of the Tridentine Mass [remember, this interview was in 2008]; what is the assessment?

R: The Tridentine Mass (EF) has its very profound internal value which reflects the whole tradition of the Church. There is more respect toward the sacred through gestures, genuflections, and moments of silence. There is greater room reserved for careful deliberation on the Lord's action and also for the celebrant's personal devotion, who offers the sacrifice not only for the faithful but also for his own sins and his own salvation [Did he just say that the EF is intrinsically more reverent than the NO, or did I miss something?]. Some important elements of the old rite can also help us reflect on the manner of celebrating the Novus Ordo (Ordinary Form). We are in the midst of a journey [I get what he's saying, but he could have found a better choice of words...this sentence just makes me think of that hokey song "Jerusalem My Destiny"].

Can you foresee in the future a rite that brings together the best of the old and the new?

R: That could be the case, but perhaps I won't see it. I think that in the coming decades there will be a comprehensive appreciation both of the old and new rites [notice how he slips into talking about two rites here?], safeguarding whatever is eternal and supernatural taking place at the altar and reducing any desire of the priest to be center stage so as to leave room for an effective contact between the faithful and the Lord through the figure of the priest, who does not predominate.

I started a thread last April at Catholic Answers on this holy man. The thread, now closed, still gets some hits... over 14k so far.
http://forums.catholic.com/showthread.php?t=233745

His desire for reverence (you can never have enough for God) is quite evident.... and heart warming.

the simple act of holding the Host and self-communicating, even if in theory it could be done without any particle problems, still sends the wrong message.

Can you foresee in the future a rite that brings together the best of the old and the new?

A horrific idea if done formally. The Novus Ordo may or may not have adopted legitimate organic development in very areas. If so, then adopt these items into the TLM, drop the NO altogether.