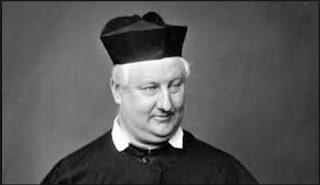 On our Unam Sanctam Catholicam Facebook page, I recently shared a story about a Catholic school in California that had decided to remove images of Jesus and Mary in order to be more inclusive. It made me remember G.K. Chesterton's definition of a liberal as someone who is so open minded their brains have fallen out. The virus of "inclusiveness" and "tolerance" has infected the Catholic soul to a degree unfathomable a few decades ago. In the wake of the events of Charlottesville, this insanity seems to have reached a fever pitch. For example, the sportscaster being pulled from an event for being named Robert Lee, or the Memphis movie theater that withdrew a planned showing of Gone With the Wind.


I was taking these thoughts with me to Mass this morning. We were singing "Faith of Our Fathers" by Frederick W. Faber. I couldn't help notice a new verse smooshed into the middle of the song. The annotation at the bottom of the hymn page noted it was a new alternate verse added in 1994 by progressive liturgist Mike Hay. The verse said:

Our mothers, too, oppressed and wronged
Still lived their faith with dignity;
Their brave example gives us strength
To work for justice ceaselessly

The only way this verse could have been added is because Hay thought the song as written by Faber was unjustly excluding women from the roster of the Church's faithful. It was irking to see how the value of women's example is found, not in the salvation of souls or the glory of God, but in the "strength to work for justice ceaselessly." Women in the Church are social justice warriors, in Hay's vision.

Given this, I wonder in what manner they were "oppressed and wronged" in Hay's vision. The context of the song as a whole is about the oppression of the Church by her persecutors. But since the value of the women's suffering is in inspiring us to work for social justice, I can't help wondering if there is a secondary meaning implicit in Hay's lyric - that the "oppression" is the oppression of "patriarchy", and the admonition to "work for justice" also refers to pushing for alleged "women's equality" within the Church (in terms of female ordination, etc).

Of course referring to our "Fathers" doesn't mean to exclude women. The entire first centuries of the Church are called the "Patristic" era, but obviously that's not meant to deny the role of many holy women in establishing Christianity - women like the Blessed Virgin Mary, St. Agnes, or St. Monica, whose feast we celebrate today. More generally, in English referring to the "days of our fathers" or "the faith of our fathers" and similar such sentiments simply means "the past." As if when we sing about the faith of our fathers we are some how meaning to exclude the possibility that any female also had faith! It's ridiculous. But of course, liberals have never been able to stomach the male universal to refer  to humanity as such.

"Everything's political," says the obnoxious Marxist character Perchik from Fiddler on the Roof. This is real sad thing about progressive ideology. Everything is only political all the time. It's always about power struggle. Not even the martyrdoms of Catholic history can be considered without inserting a political narrative about women's oppression and social justice. In the liberal mindset, there is no refuge from political interpretation; no "safe space", to use a popular progressive phrase. Social justice (rather than the glory of God and salvation of souls) becomes an interpretive meta-principle - a filter through which everything else must pass.

As an aside, it's interesting that this would not be the first time this hymn was added to or redacted. The original third verse of the hymn invoked the intercession of the Blessed Virgin Mary for the conversion of England:

Faith of our fathers, Mary’s prayers
Shall win our country back to Thee;
And through the truth that comes from God,
England shall then indeed be free.

It was the Protestants who altered this verse, such that "Mary's prayers" became "faith and prayer", "our country" became "all nations", and "England" replace with "mankind" or "we all" or something similar. The result is that an impassioned plea to the Blessed Mother for the conversion of a particular country becomes a very generic prayer for the conversion of the world. Hmm...that reminds me of something else...

Father G. always made sure that verse was omitted :)

The Adoremus Hymnals we use there actually don't even have that version of the verse. They do have the Protestantized version, though.

Gee, that verse about the mothers is awful!


As a Catholic Church organist, I spent many years playing these hymns in the Novus Ordo. There have been many alterations made to hymns. "To Jesus Christ Our Sovereign King" was rewritten to omit a militaristic image of Christ as our Captain; "Hail, Queen of Heaven" (an older hymn) omits the word "Hail", changing it to "Oh". The "Salve Regina" translated into English in the Worship Hymnal, replaced the word 'advocate' with 'woman'. By replacement, substitution, and omission, the hymns no longer foster devotion. They become vehicles for ideologies and even heresy. Singer, beware!

I have used "Faith of Our Fathers" as a recessional hymn for our TLM with the verses intact in the handout leaflet that I distributed, including:

"Faith of our fathers, Mary’s prayers
Shall win our country back to Thee;
And through the truth that comes from God,
England shall then indeed be free."

But I did tinker with the last line. Instead of England, I printed "America" and deleted "indeed." Thus: "America shall then be free."

Listen, two can play this game.

Why does this surprise you? The liturgical revolutionaries decided Catholics would not ever hear any verse from Sacred Scripture that could offend (in their politically-correct opinion)the sensibilities of modern man,the Protestants (especially the Protestants since the Novus Ordo Mass is not Catholic but Protestant/Modernist), the Jews (who now aren't included in salvation but still await their messiah), and the radical feminist. If they can rewrite the Mass to be politically-correct and Protestantize it, why wouldn't they do the same for hymns?

There is a very good hymnal which does include
this hymn in its original version.
It is called THE TRADITIONAL ROMAN HYMNAL,
published in 2000 by the Society Of Saint Pius X;
it's wonderful. I got it from Angelus Press.
I'm sure you can easily get it from them.