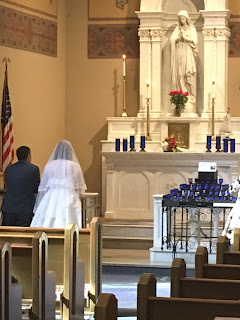 So, in the midst of all the garbage coming out, I thought I'd share some good news. In May I posted an appeal to help a friend of mine, Bill Price, who had fallen off a scaffold and suffered severe injuries to his leg. Bill is the choir director at Our Lady Star of the Sea in Jackson, Michigan for the traditional Latin Mass. At the time of his injury, his wedding was only a few weeks away.


I just wanted to post an update that the appeal was able to raise over $20,000 for Bill's medical expenses (Deo gratias). Bill is recovering fine and was able to finally get married, albeit after postponing the wedding for a few months. I recently attended the wedding of Bill and Sipjke at Our Lady Star of the Sea. It was a beautiful wedding in the traditional Roman rite, only the second traditional rite wedding I have been to in a decade. Bill was not totally back to his old self yet; he had to go up the aisle and approach the altar on crutches. I was very moved by the sight.

Here's a picture of the bride and groom, crutches and all. 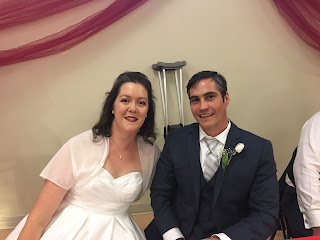 On behalf of myself and the Price's, thank you for your kindness. And if you want to hear Bill's schola, I actually have a recording of them on the USC Youtube Channel.
Posted by Boniface at 8:35 AM

I've no proper words...so unexpected, so beautiful, this song by the schola. I am in Novus Ordo land, so I lack this heavenly sound. There is now a semi-regular Latin mass, so I can dream of the day, when perhaps my voice, and spirit shall rise. Kindly please pass along my heartfelt thanks.

Thank you as well for the update. I came across this blog months back, and now again this very late night, 5:30 am. I shall have to subscribe.