Show Us Your Indignation 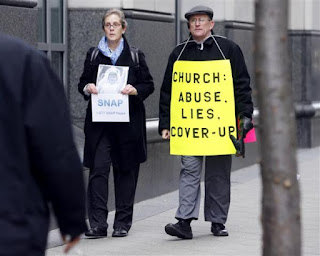 The big news in my home state of Michigan last week was that five Catholic priests in the dioceses of Lansing, Kalamazoo, and Detroit had been arrested for various sex abuse crimes--including a priest I had actually profiled on here eleven years ago for wearing a Detroit Red Wings logo on his chasuble.

This Sunday I went to mass at the parish where one of the priests had been from. Now, to make it clear, this priest was long gone from ministry in the diocese; the charges related to his time at this parish back in the 1980s, so he was not currently involved with the parish. Still, there were still a lot of parishioners around who remembered and loved this priest. The news of his arrest was a bitter reckoning.

The celebrant for the Mass was Fr. Tony Smela. Fr. Tony is an excellent priest int he Diocese of Lansing who has not been ordained too long. He is also a friend of the Traditional Latin Mass; the first EF Mass I attended of his was an All Souls Day Requiem Mass in 2018.

Anyhow, there is a lot of indignation these days about the response of the institutional Church to these clerical abuse scandals. Episcopal responses are usually cold, overly bureaucratic, and concerned more with protecting the hierarchy than addressing justice for the victims or identifying the source of the abuse. "We deeply regret" sorts of apologies feel stale; reforms were too often meaningless gestures, "cover your ass" accountability protocols, new norms that root out the rot entirely.

The reason these responses have left so many Catholics frustrated and demoralized is because there is one vital ingredient lacking: INDIGNATION. I have heard lots of episcopal apologies in my time. Oh, I can tell the bishops are embarrassed by sex abuse. I can tell they are frustrated. I can tell they are concerned. But what I have seldom seen from them in any sense of outrage, of righteous indignation, of disgust. You get the impression that they are trying to "manage" a crisis rather than raise their voices in lamentation with the children of God.

Back to Fr. Tony. Fr. Tony gave what I felt was the ideal response to news of these priests' arrest. When it was time for the homily, he preached unflinchingly on the subject and was very animated. It was clearly visible how upset he was. He was disgusted, and he let it show. He accused the arrested priests of betrayal of the Church and their vocation. He was visibly shaken with indignation. It was evident how hurt and angry this clergyman was, who as a priest, suffers in a unique way whenever the reputation of the priesthood is tarnished. He called out the hierarchy for their failures; he accused the Vatican of failure. The man was angry and not afraid to show it. The righteous indignation that is so often lacking in episcopal apologies was clearly present here.

But he did not leave it with just denunciation and harsh words. He spoke of Christian forgiveness and the healing available in Christ. He left us with the sense that, even though we are rightly horrified, in God's grace and strength we can all move forward.

The result was that instead of thinking "Here comes another lame clerical apology" I felt profoundly that Fr. Tony was one of us. One of the sufferers. I felt solidarity. I felt like he understood. Really understood. And I felt more confident that we would overcome this. I obviously was still deeply saddened by the news, but I left the Mass with a strong sense of healing.

If you are a bishop reading this or someone who works in the communications department of a diocese that crafts statements to the public, please understand this: we want--we need--to see your disgust and indignation. I don't want any more lame "we deeply regret" apologies. I want to see that, as a pastor and a son of the Church, a bishop is personally horrified by this sin. I want to see you cry with desolation at the state of the Church as our Lord wept over Jerusalem.

Also, if you know Fr. Tony and appreciate his response to this and his ministry in general, please let him know.

Given the number of Bishops that have had 'the' operation ( the snip, the geld) it really is only a matter of time before one places a word in the ear of a Bishop directly associated with this Warrior Priest and his residential address will be C/- of a Post Office Box in Antartica.