The USCCB and the Real Presence 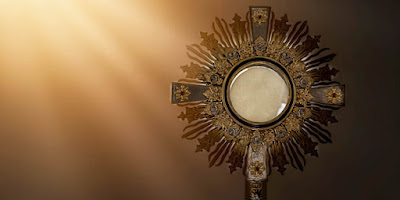 The USCCB has been lamenting the fact that only 1/3 of Catholics in the United States believe in the Real Presence, according to a recent PEW survey. Lifesite News published a great article about how the faithful, when the bishops asked how to remedy this, overwhelmingly suggested a return to traditional practices.

It is really frustrating to see the shoulder shrugging of the bishops on this question. I don't know if their "let's ask the faithful" was an attempted display of humility—like when Pope Francis asked for the prayers of the people at his papal election—but it comes across as desperate and grasping for straws: like the financial manager of a failing investment firm emailing his clients and saying, "I don't know guys, I'm stumped...anyone here got any investment ideas?"

As long as I have been following affairs in the American Church (around 2002), the failure of U.S. bishops to sufficiently promote traditional piety has always been infuriating to me. Sure, some of the better ones may give lip-service to traditional liturgical practices and devotions, but when it actually comes to using their authority to do something, very few will. Even my own bishop—who celebrates the Traditional Latin Mass and has been a relatively good pastor compared to others in this country—has done very little in way of actually changing anything at the parish level.

An individual bishop has broad authority over the celebration of the sacred mysteries within his diocese. The General Instruction of the Roman Missal says:

"The diocesan Bishop, who is to be regarded as the high priest of his flock, and from whom the life in Christ of the faithful under his care in a certain sense derives and upon whom it depends, must promote, regulate, and be vigilant over the liturgical life in his diocese. It is to him that in this Instruction is entrusted the regulating of the discipline of concelebration (cf. nos. 202, 374) and the establishing of norms regarding the function of serving the priest at the altar (cf. no. 107), the distribution of Holy Communion under both kinds (cf. no. 283), and the construction and ordering of churches (cf. no. 291). With him lies responsibility above all for fostering the spirit of the sacred Liturgy in the priests, deacons, and faithful" (GIRM 387).

Let us unpack this a bit.

The bishop establishes norms for who may assist the priest at the altar; if we look at GIRM 107, cited above, the bishop has total discretion over who may serve as acolyte, lector, cantor, sacristan, and extraordinary minister of Holy Communion and in general regulate the conduct of all who serve at the altar or handle Holy Communion. If he wished, a bishop could do the following:

GIRM 283 says "The diocesan Bishop may establish norms for Communion under both kinds for his own diocese." In theory, a bishop could go back to a more traditional practice of reception whereby communion under both kinds is reserved for special occasions or communities. Apart from any supernatural considerations, merely making the reception of communion under both species rarer, as well as restricting who may handle the sacred species, would psychologically elevate the importance of Holy Communion in the minds of the faithful—and that is before we even begin to consider the graces that would come through such changes.

But I think the individual bishop's greatest mechanism for using his authority to promote Eucharistic piety is found in GIRM 291, which gives the bishop authority over "the construction and ordering of Churches." GIRM 291 says:

"For the proper construction, restoration, and remodeling of sacred buildings, all who are involved in the work are to consult the diocesan commission on the sacred Liturgy and sacred Art. The diocesan Bishop, moreover, should use the counsel and help of this commission whenever it comes to laying down norms on this matter, approving plans for new buildings, and making decisions on the more important issues."


So the bishop, through his diocesan commission on liturgy and sacred art, can lay down norms for how churches are to be constructed or remodeled and can even mandate that all such plans must be personally approved by himself. The implications of this are astounding when you think of it. Any bishop could:

And these are only considering the prerogatives that flow from a bishop's specific authority over church buildings and those who serve at the altar. If we step back and look at a bishop's general competency over his flock as pastor of the diocese, he has even more opportunities. He could:

It is up to the Conferences of Bishops to decide on the adaptations indicated in this General Instruction and in the Order of Mass and, once their decisions have been accorded the recognitio of the Apostolic See, to introduce them into the Missal itself. These adaptations include

Directories or pastoral instructions that the Conferences of Bishops judge useful may, with the prior recognitio of the Apostolic See, be included in The Roman Missal at an appropriate place.

This is extremely broad. The USCCB could call for universal communion on the tongue and kneeling. In such places where the Missal says standing or kneeling are acceptable, they could mandate kneeling. The could ordain a specific set of approved chants for Holy Communion. According to the last bullet point, the USCCB could direct that only traditional liturgical vessels and vestments be used.

Now, of course, all of this has to be approved by the Holy See with the Apostolic recognitio if it were to actually be incorporated into the GIRM in use in the United States, and who knows how that would go. But that's beside the point; the fact is, they have never even tried.

This is why the episcopal hand-wringing over "What can we do about Catholics' lagging belief in the Real Presence?" doesn't arouse my sympathy. The contemporary American hierarchy has made no effort to solve the problem because they are too dependent upon the masses of quasi-believing Catholics to keep the diocesan apparatus functional—and they fear the backlash of what would happen should they try to actually change things. And so nothing happens, and they wonder why the problem persists; to again quote Ned Flanders' parents, "We've tried nothing and we're all out of ideas."

Let us pray for our bishops, that they will find the courage to do what needs to be done and trust in God to give the increase where man has sown and watered.

Except the GIRM still instructs that churches be built with the presider’s chair at “the head of the sanctuary”, facing the people.
It forbids using a traditional high altar design with the tabernacle attached.

Unbelievable, but there it is. And they wonder at people’s lack of faith. I can’t imagine what this arrangement does to priests as they try to pray the Mass.

Whenever the prudent time comes (could be now, who knows): Phase out the Holy Communion in the Hand indult and Extraordinary Ministers.

The impression I get from all that has happened in the Church since Vatican II is that the main job of the Bishops is to make the Catholic Church Protestant. That was the apparent underlying intent of Vatican II. The fact that only one third of Catholics believe in the Real Presence is a sign of success.

Nice thoughts Boniface. We are truly dealing with a deficit of understanding, not of options. Our bishops more resemble corporate regional managers, by far, than shepherds. If their formation produced them, it was a willingness to tow the company line. And yes, the hand-wringing..... probably has more to do with personal restlessness than true concern for the spiritual health of the laity.

Clearly the bishops lack will, not options. I would be happy to extend the benefit of the doubt to them if the last 50 years hadn't proven definitively that there is a completely substantiated link between the departure from traditional norms in liturgy and devotions and a lack of belief in the real presence.


Yes, those are all very nice suggestions.

However, the underlying assumption is that the bishops want to promote Catholicism. And of course, teaching Catholicism is likely to invite an Apostolic Visit.

Can't say I've very optimistic about things changing until we have a dramatic Divine intervention, and those are usually pretty traumatic.

I agree with Cassandra: "Can't say I've very optimistic about things changing until we have a dramatic Divine intervention, and those are usually pretty traumatic."

"After the deluge" a whole new crop of Bishops will be needed to restore the faith.

No benefit of doubt to the Bishops. The intent of Vatican II was to Protestantize the Catholic Church. It worked. To recover the Church must become poor, politically uninvolved and, most especially, return to Traditional Catholicism.

These same conversations probably went on in the wake of Vatican II about how these changes would bring drawbacks to the faith of people. For me, it's less about the liturgy and more about teaching. There must be clear teaching on the basics, and we shouldn't be focused on pleasing people. John 6 says as much.