This Female Image is Not the Blessed Virgin Mary 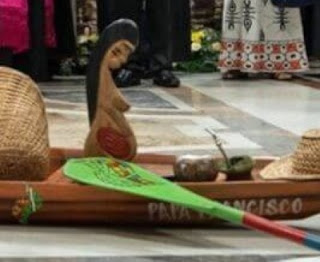 The image above has been showing up all over the Amazon Synod. It has been featured prominently in ceremonies presided over by Pope Francis himself and has been the object of religious veneration in the Vatican Gardens in what looks suspiciously like a pagan ritual.

Defenders of the Amazon Synod and the current pontificate's vision for "Amazonia" are bending over backwards to make this blatant paganism palatable by claiming the image is the Blessed Virgin Mary.

Without getting into the muddy waters of the content of the Synod—which others are already doing with much greater skill—I wanted to simply collect some statements that should be sufficient to disprove this falsehood.

The first statement is from a missionary bishop in the Amazon region, one who, perhaps more than any other cleric, would be in a position to understand what this image is. The latter two statements come from members of the Vatican communications office; Fr. Costa is the Secretary of the Information Commission. Dr Paolo Ruffini is Prefect of the Dicastery for Communications—in other words, both men tasked with delivering official Vatican communications.

Bishop David Martínez de Aguirre Guinea of Peru: "I’d seen this image on various occasions and I did not identify and not even and no one either at the vicarate...it was an image that was shown also on other occasions, and I wouldn’t know how to interpret it. Well, we all have our own interpretations … the Virgin Mary, the Mother Earth, probably those who used this symbol demonstrated, wishes to reflect fertility, to women, to life, the life presence among these Amazonian people … and Amazonia is meant to be full of life. I don’t think we need to create any connections with the Virgin Mary or with a pagan element" (source).

Fr. Giacoma Costa, SJ: "It is an indigenous woman who brings life...nobody said it was the Virgin Mary. I don’t know who might have said so" (source).


Paulo Ruffini: "It is a statue that represents life. That's it" (source).


It's some Amazonian personification of life or the earth or fertility. My own gut is that this is Pachamama, but of course no one at the Vatican would admit that.

At any rate, OnePeterFive has done an excellent job cataloguing the silliness surrounding this image and the contortions of certain persons trying to explain it away as an image of the Blessed Virgin Mary; I highly recommend their article for a much more thorough investigation of this image. However, even if we grant the dubious claim that this image is the Virgin Mary, it would horrifically improper to depict her nude.

No official channel has claimed this image is the Virgin Mary.

If anyone is still saying this image is "just the Blessed Virgin Mary", please share this information with them. Catholics are so dumb right now they will believe any nonsense if it will save them the intellectual effort of recognizing that the Church has sunk into a nadir from which it will take generations to recover, if it ever does before the Second Coming.

UPDATE: On October 25th, Pope Francis issued a statement on the theft of the images in which he referred to them a Pachamamas, thus admitting what many had suspected all along. His words:

"Good afternoon. I want to say a word about the statues of the pachamama that were taken from the church of the Transpontina – which were there without idolatrous intentions – and were thrown into the Tiber."

That female image is a ubiquitous pile of bile intentionally staged in places meant for what is Holy and Sacred.

Only God and His Holy Mother can save us.
Let us pray and do penance.
See the link below for enlightment:
https://magnificat.ca/odm/en/thou-shalt-not-have-strange-gods-before-me/

They portrayed it as Mary. It's a pregnant woman in a humble submissive position with a bowed head and it doesn't resemble any known image of Pachamama (triumphant regal woman who is a mountain from the waste down). Eric Giunta is right. This nonsense is pizzagate for Neo-Traditionalist and Neo-Conservative types.

That the statue is nude is problematic in that nudity in classic western art either symbolizes sexuality (which cannot be applied to Our Lady) or humiliation (ditto). Christ can be nude in the context of the incarnation being a type of humiliation or when he is crucified for our sins.

But it was at best Mary at worst not a goddess.

Also the people involved literally said it was not Mary

The Statue doesn't resemble any known depiction of the goddess Pachamama and was presented to the Holy Father as Our lady. Skojec doesn't present any evidence the statue is Pachamama. He just assumes it is without evidence. At best he cites people who call it a symbol of fertility or Our Lady but nobody claims it was a goddess.

He doesn't come close to answering Eric Giunta on this matter.
https://ericsgiunta.wordpress.com/2019/11/07/my-last-word-on-the-fake-vatican-pachamama-idols-controversy/


Also you are selective in yer citations of Papal spokesmen.

“the pope used the word as a means to identify the statues because that is the way they have become known in the Italian media and not as a reference to the goddess.”

If what Papal spokesman say is Gospel doesn't this qualification put to rest the idea the Pope identified the Statues as Pachamama meme you have been promoting?

If a spokesman says it isn't Mary but some "symbol" you treat that as Gospel but those same spokesmen said now bowing took place during the ceremony yet we see bowing on the video? But on that same video we see the woman who presented the statue to the Holy Father call it Our Lady and never says the word Pachamama?

So color me skeptical.

But that is not true. The woman who gave it to the Holy Father identified it as Mary.

on one hand, those spokespeople who say it's Mary, of course will admit bowing happened; as calling the nude native idol-like statue that of Mary validates the bowing.
but, when even Amerindian Catholics rightly say that this depiction is closer to a fertility idol, not like any Marian depiction known in the New or Old World, and blasphemously nude; then the other section of the spokespeople will say, oh it was a non-idolatrous icon of life (?), and no bowing happened. but then, are we allowed then to place any profane object on the altar?

the fact that this double confusion comes from the same place, means that something is up.