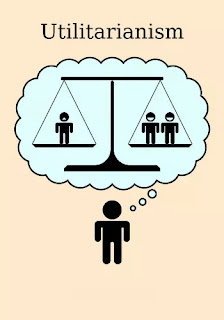 In the debate among Catholics about the damage of long-term economic shut down versus the risk posed by COVID-19, one will often hear the word "Utilitarianism" being thrown around. The subject inevitably arises whenever people begin questioning whether the deaths caused by coronavirus are "worth" the total destruction of the economy. As soon as someone starts making a calculus about whether human lives are "worth" some other sacrifice, the party in favor of keeping the economy closed will often retort that such calculations are "Utilitarian" and contrary to an authentic Catholic ethos.

It is not my intention here to discuss the pros or cons of opening the economy back up. However, I do want to address the way the term Utilitarianism is being bandied about in these circumstances and educate people on why it is being used incorrectly.

Many Catholics are under a mistaken notion that a moral act is "Utilitarian" if it tries to calculate the worth of human lives in relation to some other good. For example, saying, "It's not worth destroying 22 million jobs for the sake of a virus that 99% of people recover from." We can see in this statement that there is a kind of calculus happening—there is acknowledgment that 1% of the persons infected will regrettably die, but that this is not "worth" destroying the livelihoods of 22 million people. And therefore this argument is Utilitarian because such a calculus is being made and that such an argument is ipso facto wrong for a Catholic to make, or so it is said.

This, however, is an incorrect application of the term "Utilitarian." Utilitarianism does not simply mean that one calculates the weight between two different sorts of human loss. We do that sort of thing all the time, and it is not Utilitarianism. For example:


None of these situations are Utilitarian, despite the fact that there is a calculus of "worth" taking place. Rather, these are examples of risk management. Risk management is what happens when people understand that any course of action possesses certain inherent risks. Being unable to totally avoid those dangers, they proceed with a course of action while doing what they can within their power to mitigate the risks associated with it.

We know people will die in crashes and thus we try to mitigate traffic deaths with traffic laws, enforcement, and driving education. The general knows soldiers will die in a battle and so chooses the plan that tactically exposes his soldiers to the least amount of harm. The man with the roofing company knows at some point an employee will get injured and tries to mitigate this by mandating the proper protective gear and regular safety training. All of these are examples of risk management, not Utilitarianism, despite the fact that there is a sort of calculus or "trade off" that is weighed between the sufferings endured by a few versus the good for the greater number.

What would make an act Utilitarian, then? According to John Stuart Mill's theory, Utilitarianism is not so much that the few suffer on behalf of the many, but that their suffering is required to secure the benefit of the many, which can only come about on behalf of the suffering of the few. In true Utilitarianism, there is an intrinsic, causal connection between the suffering of Class A and the good of Class B. It is not merely accepting that a certain course of action will have unavoidable risks. Rather, it is intentionally willing those negative outcomes to Class A as a means of establishing the good of Class B. But in our examples, we can see that this is not what happens at all.

For example, though we know 38,000 will die in car crashes as a result of keeping the roads open, nobody says that these deaths are necessary to keep the roads open. If there is any doubt about this, we can do a simple test. Suppose through some miracle we were able to maintain our travel without a single traffic fatality in a given year. Would people respond with frustration and anger that we didn't get to kill off 38,000 people? Of course not. There would be rejoicing that we had managed to keep road travel open while avoiding any casualties. This demonstrates that the 38,000 annual traffic deaths are not part of a Utilitarian calculus; rather, they are a risk that society is willing to assume as an unintended side-effect of vehicular traffic. Society actually works to mitigate these fatalities because the relation between driving and fatal car crashes is neither necessary nor causal; our ability to drive is not made possible by traffic fatalities. There is no Utilitarian trade-off.

The general's attack is not made possible because 2,000 cavalrymen will probably die. If he could take the enemy position without losing a single man, he would. The presumed loss of life is an unintended consequent of the attack that is tolerated in order to secure the objective of winning the battle. If the owner of the roofing company goes a year without any accidents, he does not wring his hands and say "Ugh...we really needed at least one or two of you to fall off a roof this year to keep our margins up." Of course not. The statistically probable accidents are neither willed nor are they intrinsic to keeping the business open. The business owner would happily do away with roofing accidents altogether and does everything in his power to mitigate this risk.

Similarly, to argue in favor of opening the country back up, even knowing that people may die as a result, is not a Utilitarian trade off. Even if we mitigate the spread of COVID-19, we cannot stop it. It is inevitable that it will spread, and inevitable that people will die from it. It is also inevitable that the continued closure of the economy will have disastrous consequences that will certainly spiral into its own unique health and safety crisis the longer this goes on. It is not Utilitarianism to say that we are willing to accept the potential risk of COVID-19 in order to stave off long term socio-economic collapse. It is no different than a general choosing the course of action that will lead to the lowest amount of casualties. It is an example of risk management, not Utilitarianism.

And we know it is not Utilitarian simply by this fact: COVID-19 deaths are not necessary for the economy to recover. Even though they may accompany a general re-opening, they do not make the re-opening possible. There is no "good ends through evil means" sort of causal occurrence; rather, there is a choice between two options (each of which has its own inherent risks) and the decision to go with the option that seems less destructive in the long run while continually trying to mitigate the unintended consequences.

Clearly our examples do not fit this mold. Even if we can expect 38,000 traffic fatalities a year as the cost of keeping the roads open, nobody argues that those 38,000 are morally obligated to die for this end. The soldier attacking the hill is under no obligation to become a casualty. No roofer has an obligation to fall off the roof and injure himself, even if it is statistically certain that at some point someone at the roofing company will. And even though we know COVID-19 will continue to wreak havoc even after the economy is opened up, nobody is under any moral obligation to contract the coronavirus. There is no relationship of obligation between Class A and Class B, and without that theoretical morally obligatory duty of Class A to suffer for the good of Class B, we do not have an actual Utilitarian trade-off happening. Again, this entire argument comes down to risk assessment and risk management, which are always dictated by prudence and admit of various different courses of action which may all be morally justifiable.

But that's not acceptable to some. Many Catholics and others do not want to view this through the realm of prudence or risk management. They want to say "YOU ARE MORALLY OBLIGATED TO SUPPORT THE LOCK DOWNS AT ANY COST OR ELSE YOU ARE UTILITARIAN AND YOU WANT PEOPLE TO DIE."

So does that mean the Trolley Dilemma is not a true utilitarian conundrum?

This is an excellent explanation. TY