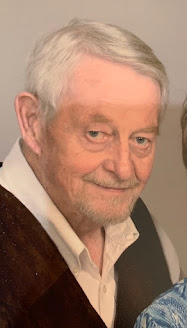 I apologize it took me so long to get around to this, but I want to take this opportunity to pay tribute to the memory of a brother and friend in the Lord who passed away in July. I am speaking of Mr. James Larson, a friend and collaborator, who died on July 6th. He died of heart failure while doing what he loved: writing an article about the Church. He was found dead seated at his desk, his Bible open to the book of the prophet Jeremiah. The final, unfinished article he was working on when he passed has been published on his website, Rosary to the Interior. You may view his obituary here.

I am struck by this line: "Or my articles identifying the real problem with evolution being a denial of the metaphysical concept of substance."

Can you please link to some of these? I have been tossing this idea around in my head for some time and would love to hear what someone else has to say about it.

I have found that the typical breakdown of intelligent design vs blind chance is not quite the issue, at least not for me. Part of my thinking here is that there is probably a version of evolution that makes sense philosophically, but it is not the one popularly promulgated. The big issue I have with it is the idea of "purposeless purposefulness," the idea that 1) evolution is blind and has no direction and simultaneously 2) evolution has a very specific purpose and acts in very specific ways.

This makes it seems like evolution is both goal-directed and not goal-directed, that it is both teleological and non-teleological. I have written about this some on my own (tiny) blog here: https://joedrinkscoffeeandthinksaboutjesus.wordpress.com/2019/10/14/a-lengthy-response-more-on-evolution/ and in a few other posts.

It is very hard to find critiques of evolution that actually deal with the metaphysics of it rather than the "if you find a watch on the beach" kind of arguments, so I'd really love to hear your thoughts on evolution and substance.

This is the essential one:

I didn’t know. We also spoke sometimes, but opposite you, it was mostly ordinary things. Life, suffering, fighting. I identify with falling out of contact, he wrote so much and deeply, it required effort to read. His book stands in my shelf here in Malmö. Happy to read the backstory. He prayed for me, I pray he still does. Outsiders united, forever.

Very sorry to hear of the passing of James Larson as I avidly used to read his website War Against Being until he shut it down. I had figured he was in his late forties so am amazed that he was, in fact, the same age as myself. It's strange how one's imagination can play tricks! He portrayed an incisive & analytical mind in his writings providing a very different standpoint from the usual output of other sources of information on Catholic affairs. I shall miss him. R.I.P.

R.I.P. James Larson. I discovered The War Against Being via USC and am grateful!

I also discovered the War Against Being at another site (The Remnant) and read Mr. Larson's essays with great interest and corresponded a few times. I was in general sympathy with his opposition to sedevacantism and his support for the Papacy no matter the Pope. Eternal rest grant him . O Lord and let perpetual light shine upon him.