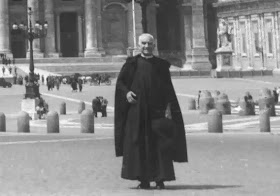 In fact, history soon showed that 'liberal secularism', or supposed neutrality regarding religion, was n reality true hostility; and it ended up deifying and divinizing the State." (Leonardo Castellani, DominguerasPrédicas, pg. 327).
Boniface at 9:27 PM