Fr. Barron and Mark Shea and Balthasar are Wrong 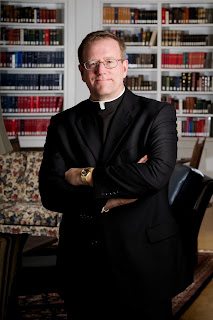 Michael Voris recently came out with a video entitled simply "Fr. Barron is Wrong", challenging the popular priest-evangelist on his repeated statements in favor of the theory proposed by the late Hans Urs von Balthasar in Dare We Hope? that it is acceptable for Christian to have good hope that Hell may be empty. Voris rightly notes that Christ Himself says some souls will definitely go to Hell on numerous occasions, and that the Church's alleged "silence" on the definitive presence of anyone in Hell is not due to any support for the empty-hell theory, but due to the fact that the definitive presence of any one soul in Hell is not part of Divine Revelation and therefore outside the pale of the Church's competence to define. Therefore, the fact that the Church has never "proclaimed" anyone in Hell provides no rationale whatsoever for asserting that Hell is empty.

At this point Mark Shea jumped in and accused Voris of smearing Fr. Barron wrongly with his "poison." It is not my intention here to comment on the antagonism between Voris and Shea; I am more interested in Shea's comments that the Fr. Barron-Balthasar "Empty Hell" theory is "perfectly within the pale of orthodox speculation" and that "at the end of the day, that’s all you have: two schools of opinion–both of which are allowed by the Church." Thus, the Balthasarian "Empty Hell" theory is granted a legitimate place on the spectrum of legitimate opinions upon which Catholics can disagree in good conscience, and the traditional opinion that people do in fact go to Hell is also placed on the spectrum as another legitimate "option."

This defense of Fr. Barron and Balthasar apparently goes back to Shea's position that Tradition itself has two "irreconcilable" aspects of the question of Hell that leave the issue fraught with a certain "tension", which I contest but will leave off for the time being.

I am more interested in Shea's comments about "two schools of opinion-both of which are allowed by the Church." This is what I object to. Balthasar's "Empty Hell" theory is absolutely not a legitimate position on the Catholic spectrum, nor is the belief that some people actually go to Hell just one of various "schools of opinion." According to Fr. Barron, Shea, and Balthasar, even though it is heresy to say that we know that Hell is empty, it is not heresy to suggest that we can have a good hope that Hell is empty. How Fr. Barron and others can assert this is beyond me, since even this proposition is condemned as a heresy by Bl. Pius IX. Let us recall the Syllabus of Errors, number 17, in which the following proposition is condemned:

"Good hope at least is to be entertained of the eternal salvation of all those who are not at all in the true Church of Christ." -- Encyclical "Quanto conficiamur," Aug. 10, 1863, etc.

This is precisely what Fr. Barron and Balthasar assert, and what Mark Shea says is "perfectly within the pale of orthodox speculation." Fr. Barron says we can at least have a good hope that everyone makes it to heaven, and yet Pius IX specifically condemns this opinion. Not only proclaiming knowledge of universal salvation, but even allowing "good hope" to so much as be "entertained" is condemned. Period.

Revelation 20:15 is cited by Voris in his video, which says, "And whosoever was not found written in the book of life, was cast into the pool of fire." Again, this is not presented as a hypothetical, but as a real vision of the situation at the Last Judgment. It could be countered that it only says that people not in the book of life get cast into the pool of fire, but does not imply that anyone was actually in this unfortunate position. We do know at least, however, that two individuals will be damned: the Beast and the False Prophet: "And the devil, who deceived them, was thrown into the lake of burning sulfur, where the beast and the false prophet had been thrown. They will be tormented day and night for ever and ever." (Rev. 20:10).

We could also cite Lumen Gentium 16, which says, "Some there are who, living and dying in this world without God, are exposed to final despair. Wherefore to promote the glory of God and procure the salvation of all of these, and mindful of the command of the Lord, "Preach the Gospel to every creature", the Church fosters the missions with care and attention."

Note that LG 16 says that "there are" some who wind up dying in final despair without God, and then goes on to cite this as one of the reasons for the urgency of the Great Commission, which is in accord with Tradition: the Gospel must be preached in order to save souls from Hell.

Fr. Barron and Shea both assert that the Empty Hell theory of Balthasar seems to be taught by Pope Benedict XVI in Spe Salvi. Having just completed a very thorough study of the late pontiff's encyclical, I dispute this fact, but that is for another post. But it is sufficient to say that, if we are reading the Magisterium in continuity with itself, Spe Salvi can simply not mean what Fr. Barron and Shea suggest, otherwise Benedict XVI contradicts Pius IX.

The "Empty Hell" theory is not one of many legitimate "schools of thought." It is a novelty, toyed with early on by Origen and then virtually abandoned until the modern era. The amount of legerdemain and re interpretive manipulation one has to do to Scripture, Magisterial teaching, history and tradition in order to breathe life into the theories of Fr. Barron and Balthasar on this question is appalling. The evidence in favor of the traditional teaching that there are people in Hell outweighs Balthasar and Fr. Barron's positions as a tidal wave overwhelms a sand castle. That this novelty is being defended by some as a legitimate position within the pale of orthodoxy is sad, especially in light of Syllabus of Errors number 17 which explicitly condemns it. It should also be noted, in case one wants to write off Voris, that very respected mainstream priests and theologians also consider Fr. Barron's opinions very troubling, such as Msgr. Charles Pope of the Archdiocese of Washington (see here) as well as Dr. Scott Hahn, who once stated that Balthasar's theory was absolutely without merit.

I'm not anti-Mark Shea. His book, By What Authority? helped bring me to the Church. But, as Voris said of Fr. Barron, Mark Shea is simply wrong here. I'm not "attacking" him, not "smearing" him, not calling him a heretic. I am just saying he is simply wrong.

Being that we are entering that period of the liturgical year when the readings direct our minds towards the Last Things, for the remainder of November all my posts will relate to this question of Hell, its reality, eternal duration, and the Church's Tradition on this important subject. Next time, I will examine the definitive presence of damned souls in Hell throughout Christian Tradition as established by the Christian sensus fidelium.
Boniface at 10:34 PM