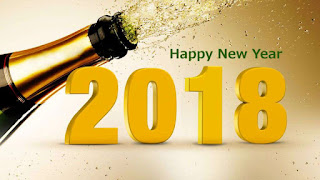 Well it's time for my belated annual Happy New Year post! Another year has passed us by; 2017 was a very crummy year for me that saw a variety of personal and professional challenges. I regret I was not able to give this blog more attention, which means my annual "Favorite Posts" list is unfortunately small this year. I think I posted like twice a month on the blog and barely did anything on the sister site.

I was very busy writing for one thing, and 2017 saw the publication of two very successful books for me, first, the self-published The Book of Non-Contradiction, which is my magnum opus on reconciling discordant biblical passages; second was Heroes and Heretics of the Reformation, available through TAN, which tells the story of the 16th century through the lives of the men and women who lived through it.

That being said, 2017 was an amazing year in the life of the Church and I am happy I got time to write that which I did. I'm still on sabbatical but have some great ideas for upcoming articles. In the meantime, here are some of my favorites from the year.

Reflections on Magnum Principium: On the Holy Father's motu proprio calling for a further extension of vernacular in the liturgy.

Benefit of the Doubt Presumes Doubt: To give the "benefit of the doubt" in the face of plain evidence to the contrary becomes no longer a benefit accorded to a doubt, but rather wishful thinking of the most fantastical sort.

The Black Hand of the Madonna: The hand of the statue of the Blessed Virgin Mary at Fatima has turned black.

Pope Francis & Populism: It is astonishing how Pope Francis speaks of populism as if he is totally unaware that he is the world's most eminent populist.

Current Events Round Up: Francis and the death penalty, the Institute on Marriage and Family, Burke, football players kneeling, the Filial Correction and more!!!

Political Freedom Would Make Our Parishes Stupider: In the absence a coherent Catholic social ethos, lifting the ban on political activity by churches in the USA would cause each parish become a tool of the Democratic or Republican parties, and we would see the politicization of parish life in the basest manner. Catholic social life, already anemic, would become that much stupider.

Chris Cornell (1964-2017): One of my favorite posts of the year, exploring the faith of musician Chris Cornell, who tragically died in spring of 2017.

"God cannot be God without man": In which, just for the record, I defend one of Pope Francis' confusing statements about the relationship between God and man.

Scientists Executed by the Catholic Church: Historical apologetical article deconstructing the myth of the Church killing scientists for their beliefs.

Muller and Ladaria: Reflections on the replacement of Cardinal Muller by Ladaria at the CDF.

"That the seat of Peter might not be dishonored by the occupancy of two bishops": The very idea of having two bishops or two popes was abhorrent to the early Roman Church. It was seen as a sign of discord.

Man-Pandering: What to do about men? If we are not de-masculinizing them, we are going to the other extreme - appealing to the silliest masculine stereotypes about them.

The Duty of the State to Honor God: An original USC video explaining the Catholic idea of the state's duty to honor God.


Thank you to everybody who has ever helped me, linked to me, read my articles with interest, corrected me, commented here, or wished me well. God bless you all.
Posted by Boniface at 10:09 AM No comments: