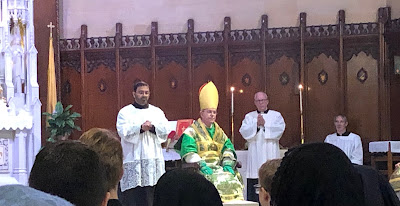 There's no real theme to today's post, just some random smattering of thoughts I put together after returning from Detroit:
Today the great Bishop Athanasius Schneider said Mass in Detroit as part of the Call to Holiness event put on by Assumption Grotto. If the name Assumption Grotto sounds familiar, this is the parish of traditional priest Fr. Eduard Perrone of the Archdiocese of Detroit. Some years ago Fr. Perrone was accused of sex abuse and suspended from ministry. Fr. Perrone fought back, however, and was successfully able to demonstrate that the allegation was fabricated by a detective. Perrone sued the detective for defamation and won a $125,000 judgment against her. Meanwhile, the CDF declined to pursue any discipline against Fr. Perrone, effectively dropping the case—though to my knowledge, the Archdiocese of Detroit has still not reinstated Fr. Perrone to public ministry, but I may be mistaken.
Anyhow, that's the parish this was at. It's a beautiful old urban church in the best style of the golden age of Midwest Catholicism. The church was absolutely packed for Bishop Schneider's Mass. If people are losing interest in Catholic Tradition, there was no sign of it at this event. I had to wait in line in my car out on the main street before I even got onto parish property; once I got onto parish grounds they had ushers outside directing the overflow traffic to park on the grass. And I was there a half hour early!

I was fortunate enough to get a seat very close to the front, maybe third row. Assumption Grotto had produced an extremely fine worship aid that not only gave you both the prayers/readings and fixed Mass parts in one place, but also had an extremely interesting page explaining how a Pontifical High Mass is different from a Solemn High Mass. It had a lot of minutiae on it that even I'd never heard before. I meant to save it and I did bring it home but...of course now I cannot find it :/

I have been to Pontifical High Masses before, but what really impressed me about Bishop Schneider's Mass was the universality represented in who was present. It was truly reflective of the Catholicity of the Church. The diversity was spectacular. There were whites, blacks, Filipinos, Indians, Hispanics, and Japanese. I saw plenty of young families with children, lots of old folks, and many people in between. Millennial hipster Catholics with their beards and slicked back hair sitting side-by-side with boomer homeschool marms. Academic looking tweed jacket types and blue collar schlubs. The Knights of Columbus were there, resplendent in full regalia. I saw some religious, both men and women. The choir was made up of a mixture of ages from teenagers up to elderly. All presided over by a central Asian bishop whose native language is German saying an ancient liturgy in Latin. It truly was a "multitude of every tribe and tongue and nation" (Rev. 7:9), diversity in the best sense—not the ridiculous Babel of woke individualism, but people of every social, ethnic, and demographic background finding unity in the worship of Christ through the traditional rite of the Church.

Bishop Schneider spoke on several themes: the action of the Holy Spirit within the Church, the importance of the Eucharist in the life of the Christian, and the Mass as the highest act of worship the Church can offer. It was such a solid homily. There was no ripping on anyone or trashing different segments of the Church, such as you hear whenever Pope Francis opens his mouth. There was no alarmism about vaccines, nor any of the sort of quasi-political nonsense you get when you read Viganò. It was just good, wholesome, spiritual preaching.

Year ago, I read Athanasius Schneider's Dominus Est. It remains one of the greatest apologetical works on why we should receive communion on the tongue. During his Mass, watching him seated on the faldstool, eyes cast down in humility, while the subdeacon read the Epistle, more than once I thought, "In what world do we live in where this man is on the margins of the hierarchy? Why can't we have this guy for pope?"

Whatever Pope Francis or others want to say, Tradition is alive and well. It was not created by papal fiat and it won't be destroyed by papal fiat. I am fortunate I got to assist at a Mass said by this good prelate, and I pray for more like him.

A Sorority Girl Tells Me About Ritual 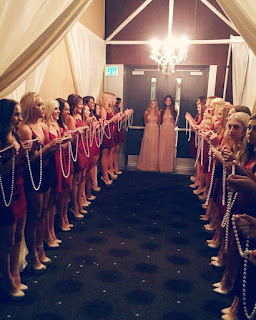 Not long ago I was talking to an acquaintance of mine, a young woman who is a college junior. I saw her in town and we were standing by her car catching up. She came from a respectable Methodist family, but of very secular attitude. She told me a little bit about how college was going, and from what she said I gathered that she had regrettably fallen into the lifestyle that is so common in many American colleges: frequent partying, drinking, promiscuousness. She mentioned a boyfriend she was "staying with", and also told me she was struggling in some of her classes because she was always staying out too late with friends drinking and having a hard time getting motivated in the mornings. Typical college girl stuff.
But that's not what this story is about. This story is about something else she told me. She mentioned she was heavily involved with one of the college sororities. She was one of the committee officers. I asked her what her role was and she said Master of Ceremonies. This piqued my interest. "Ah, you're a ritualist?" I asked. She said yes; her job was to coordinate the ceremonies of the sorority for all its various occasions, like the initiation of new members, promotion of members, commemorative events, etc. I asked if she liked it and she said very much so. In fact, she told me she was just then at the store picking up some ritual items. She showed me the back of her car and it was full of candles, satins, what looked to be robes or gowns, and various other ritual objects one could imagine a sorority making use of. I wanted to ask if she had giant paddles but I thought that would be cliché.
Anyhow, I was curious about their ceremonial. Obviously, being a sorority, this was "secret" and she couldn't tell an uninitiated outsider the details. But she told me the rituals went back to the founding of the sorority, which was in 1896. So, by American standards, the organization was quite old. I asked, "How closely do your rituals today reflect the rites as created by the founders of the sorority?"

"Oh they're exactly the same," she answered. I was very surprised. I said, "They never thought to change or amend them? They never felt they needed to update them for modernity?" She made a disgusted face, as if the very suggestion that the rituals be changed was offensive. "Oh heck no," she said. "It's very serious for us to carry on the rituals as the founders intended." Then she explained that performing the rites as handed down from the past provided a vital link with the history of the sorority, its previous members, and kept it grounded in its mission. It created historical continuity. She was very zealous explaining this to me; whatever else was going on in her life, I could tell that she attached great importance to her office as Master of Ceremonies.

Then she told me that the sorority's by-laws actually punished members who were found to be guilty of deviating from the received rituals of the organization, including expulsion from the sorority for repeated infractions. "So, yeah, we take it pretty seriously!" she said.
I thanked her for her time, wished her well, and was on my way. But as I left the encounter, I had a startling thought: This young woman—a junior in college living a secular lifestyle shacking up with her boyfriend and getting plastered every night—understands and values liturgy more than the current Successor of St. Peter.
"Thou hast hidden these things from the wise and understanding and revealed them to babes" (Matt. 11:25)
Posted by Boniface at 8:41 AM 3 comments: