Obliged To Come To Mass—Unless You Don't Feel Like It

One year ago this week I published an essay entitled "New Normal: Subjectifying the Sunday Obligation" (May 19, 2020). I recommend reading that article in its entirety as a preface to this one, but the basic point is that the Covid-19 restrictions have pushed the Sunday obligation into the realm of the subjective, something to be fulfilled entirely based on conscience.

In my diocese, the Sunday obligation has been suspended until Pentecost Sunday. This week our bishop send out an email talking about the return of the obligation. It contained this confusing nugget:

"Upon the great Solemnity of Pentecost, May 23...the dispensation from attending Sunday Mass will expire. The dispensation remains in place, of course, for those who have good reason not to attend. If in doubt, speak to your pastor."
I found this statement extremely puzzling. It sounds as if he is saying "The Sunday Obligation is returning, but if you feel like you have a good reason not to attend, it's ultimately up to you." In other words, while the canonical obligation is returning, how and whether it is fulfilled is being tossed into the realm of conscience, something to be sorted out in pastoral dialogue between a Catholic and his parish priest.

Some may say I am making too much of this. "Oh Boniface, the bishop is just reminding people of traditional teaching that those who are ill or physically incapable of attending Mass are not obligated." But I do not think he is merely stating the return to pre-Covid norms. For one thing, he does not say that. He says the specific Covid dispensation "remains in place" for those who have "a good reason" not to attend. What constitutes a good reason is left to the discernment of the individual, who can seek pastoral guidance if they are conflicted. A return to pre-Covid norms would be more along the lines of "The duty to attend Mass on Sundays and Holy Days remains obligatory for all Catholics of canonical age who are physically able and not prevented by illness."

Perhaps the bishop was just trying to be diplomatic; perhaps he meant to imply a return to pre-Covid norms that with his statement. But perhaps he didn't. It's too vague to tell, and the delegation to conscience is still  troubling. In my article a year ago, I made the following prediction:

Eventually, the bishops will decide that it is safe enough to reinstate the Sunday obligation. Maybe this summer. Maybe later. But eventually the Sunday obligation will be restored. But after months of non-stop Covid-19 hysteria and media fear-mongering, many Catholics will still "not feel safe" returning to Mass...The bishops will waffle on clarifying the matter and issue contradictory statements, essentially saying that while the Sunday obligation remains in place, one must always follow the dictates of ones conscience. The statements will leave enough ambiguity for persons on both sides of the dispute to argue from. Meanwhile goofy parish priests will take to Twitter to confuse the faithful by affirming the right of any Catholic to abstain from physical attendance at Sunday Mass if they don't "feel safe." Essentially, the Sunday obligation will transform entirely into a subjective matter of conscience.

This is exactly where we are now in 2021. And its frustrating that few see the the inherent illogic in the approach: If it is safe to resume public Masses, then there is no reason to dispense from the Sunday obligation. But if it is not safe to resume public Masses, the obligation should be dispensed. What makes no sense is to say "The Sunday Obligation is returning, but whether you attend is still up to you."
Having spent the last year telling the faithful that watching Mass from at home was spiritually equivalent to attending in person, the bishops now lack the moral authority and intestinal fortitude to compel all Catholics to return. My bishop has spent the last few weeks sending emails trying to explain to Catholics why they ought to come back to Mass. Always a very good thing! Every Catholic should know why they should want to attend Mass. But it's very clear that this emphasis on encouragement is meant to replace the canonical obligation—the bishop is encouraging people to return to Mass because he will no longer tell them they must.

I can foresee some readers saying I am being too harsh in my assessment of the bishop's statement. But again I want to return to what I said in my 2020 article: "The statements will leave enough ambiguity for persons on both sides of the dispute to argue from."

My friends, the Sunday Obligation is not coming back.
Posted by Boniface at 9:45 AM 4 comments: 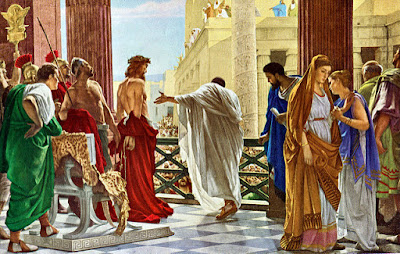 Sometimes the worst thing about blogging and writing as a traditional Catholic is having to deal with other traditional Catholics. The past few months I have had some of the absolute worst online interactions in my life, and they have regrettably been with other traditional Catholics. I am talking about matters of mere disagreement where trads tend to hold various viewpoints. I'm talking about rudeness, insults, detraction, crudity, malice, gossip, ad hominems, bullying, rash judgment, slander, and every vile character trait the Scriptures associate with the godless. It has been so discouraging.
I am sure I am sounding like an old codger, but the one common thread with many of these interactions has been the youth of the interlocutors. Usually in their early twenties, sporting the shaved on the sides/long on the top hairstyle common amongst young men today, imbued with flaming machismo that is so ridiculous as to make them into little more than a Trad caricature. Many of them unemployed, living at home, or otherwise at the very bottom rung of the social ladder. Threads with young trad women are seldom any better.
I do not want to make this about youth; but at the same time, I cannot deny the pattern I have seen of late, and it's extremely depressing. Besides the evident lack of charity, it seems like a raw ignorance of what being a Traditional Catholic is even about. For many of these people Tradition seems to be primarily a social movement to "smash Western liberalism"; sometimes they say as much plainly. Obviously the entire ethos of Traditional Catholicism is opposed to the prevailing social mentality, but it would be profoundly wrong to view the Faith as essentially a contrarian social movement, even if it does oppose the modern zeitgeist. Why is this so wrong?

Traditionalism's conflict with modernity is ultimately incidental—Traditional Catholicism is not defined by it's opposition to anything else; if modernity and all its attendant evils disappeared tomorrow, Traditional Catholicism would still be as rich, vibrant, and life-giving as it ever was before liberalism ever existed. Traditional Catholicism opposes liberalism primarily because liberalism opposes it, but Traditional Catholicism itself needs no enemy, no antagonist to give it meaning. Evil is a perversion of the good, but the good subsists in itself.
Liberalism has always been different. As an ideology that is inherently "progressive", its existence depends upon its opposition to tradition. One can only walk up the staircase of liberalism by stomping ones foot on the steps of tradition. This is why things like racism, sexism, poverty, etc. will never go away under liberalism: not merely because liberalism is incapable of solving them, but because liberalism needs then to exist in order to have purpose. Regardless of how un-racists society becomes, liberalism needs there to be racism, just like a Marvel movie needs an uninteresting villain for the heroes to pound. Without an enemy, liberalism can't exist.
But what happens when Traditional Catholicism takes on this character as well? When one defines ones traditionalism solely in terms of opposition to liberalism? What happens when being a Traditional Catholic is reduced to a series of flexes designed to showcase your Traddy cred? When we stupidly define Traditionalism as some Hegelian antithesis to liberalism (Liberals oppose racism, therefore I will be racist. Liberals oppose sexism, therefore I will be misogyinist. Liberals care too much about feelings, therefore I will be unfeeling)? We when think of our Faith as just a "movement" in sectarian terms? When we think being a Catholic man means unfiltered testosterone-driven machismo? We we insult others on their faith journey instead of helping them? When our definition of what it means to be a good Catholic is measured on the barometer of how much we tear down the secular order?

I'll tell you what happens—we choose Barabbas, not Christ.

I could go on about why this seems to be the case among the younger traditionalists, but I don't want to speculate. Rather, I will just say I have been disgusted by the behavior of many of them. And no, they are not just trolls pretending to be Catholics. Were these incidents isolated, maybe that would be a plausible explanation, but unfortunately these experiences are too endemic to be attributed to trolls. There is a real problem in the Traditional Catholic youth subculture, and I can't have been the only one to have noticed it.
See "Balancing Truth and Humility", USC, Dec. 2020)