The Attraction of Traditional Christian Architecture 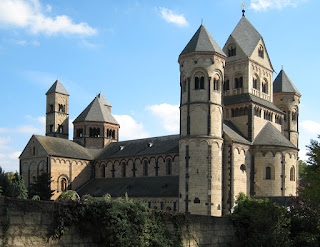 In my professional life I have been spending the last week lecturing on design elements of traditional Christian architecture, specifically looking at churches from around 400-1300. I've guided my students through the identification of the design elements of the late Roman, pre-Romanesque, Romanesque/late Romanesque and Gothic styles. It's always refreshing to devote time to studying the great monuments of the Christian faith and see how the beauty our religion has inspired the hearts of people over the ages.

I approach these lectures very analytically, simply highlighting the different design elements and explaining their liturgical or architectural function. I talk about the benefits of ribbed vaulting and how it was superior to earlier transverse arches. I explain the structure of a Romanesque arcade, or a Gothic fleche, or a late patristic era fenestella, and help the students identify these elements in pictures. In other words, I don't teach the architecture from a propagandistic angle, as if the purpose of the lesson is to demonstrate the aesthetic superiority of traditional Christian architecture over other forms. I just show the architectural elements and discuss them in their own right without reference to anything else.
And yet, it amazes me how merely showing traditional Christian architecture never fails to elicit impassioned responses from students who implicitly draw comparisons between modern architecture and react with indignation. I always get comments like "Why don't they build churches like this anymore?" "Ugh, modern churches are so ugly!" "Who ever thought it was a good idea to get rid of this?" "I hate the way churches look nowadays." I don't need to make any effort to inculcate such sentiments; merely seeing their religious architectural heritage evokes feelings of frustration with modernity. The students have been robbed and they know it.
In a way, the beauty of Christian architecture is a microcosm of Catholic tradition as a whole. How many people embrace tradition upon merely seeing it, immersing themselves in it, and realizing it's innate superiority to the bland, rice-cake religion proffered by contemporary Catholicism? There are many traditional Catholics—myself among them—who only needed to read the prayers of the traditional liturgy and that was enough. As I said long ago, there is an evangelical power to Catholic Tradition (see "The Evangelical Power of the Faith", Dec., 2007).

Beauty is attractive, and that's really all there is to it.
Posted by Boniface at 1:26 PM No comments: