One of the most notable characteristics of the Novus Ordo Missae is the utilization of members of the congregation in roles that were formerly filled by clerics in Minor Orders. This change was brought about due to a misguided understanding of "active participation", a phrase whose pre-Vatican II definition had meant something more akin to "full engagement of mind and heart" but which in the post-Conciliar regime came to mean "everybody moving around doing stuff." There is an excellent little exegesis on the pedigree of the phrase participatio actuosa in Dr. Peter Kwasniewski's book Reclaiming Our Roman Catholic Birthright (which I will be reviewing in the near future, Lord willing). For those of you who don't have the book, I recommend this article from Dr. Kwasniewski at New Liturgical Movement.

While there are many examples of congregants being substituted for clerics in the new Mass, here I'd like to focus on the role of the lector in the Novus Ordo, specifically in utilitarian terms. That is, there are many good arguments that it is more uniquely fitting for clergy to lector; here I am going to present an argument for the same based on the fact that congregants are generally bad at doing the readings.

Before we examine this, I want to reference from the Rule of St. Benedict, Chapter 45, on mistakes made when doing the readings. St. Benedict wrote:

Should anyone make a mistake in a psalm, responsory, refrain or reading, he must make satisfaction there before all. If he does not use this occasion to humble himself, he will be subjected to more severe punishment for failing to correct by humility the wrong committed through negligence. Children, however, are to be whipped for such a fault.

Last Friday in particular I devoted the entire day to pilgrimage. I began by making a drive into the hills up to Silverado in Orange County to visit the Norbertine monastery of St. Michael. The monastery grounds were gorgeous; unfortunately the building was from the 1970s and not very aesthetic. But a brother I met in the parking lot quickly told me about a new building they were soon going to be moving in to, one in the more traditional style. He invited me to attend mid-day prayers in the chapel, which was a huge grace. While I waited for the prayers to begin, the brothers quietly emerged from various doors and passages and glided into their choir stalls. I was surprised not only at their number (I counted 30), but also their relative youth. Of the 30 brothers I saw, I counted 14 that looked to me to be in their twenties. I also noticed a few novices and postulants sitting off to the side who were also all young men.
They began their prayers, all chant, all Latin. It was lovely. I am pretty sure this was a Novus Ordo community, but how nice it was to see youthful brothers in their full traditional habits chanting the office in Latin. And to see their community was growing and would soon be in better quarters! After prayers, one of the older members of the community, a priest named Fr. Steven, spoke with me at length about the new building and asked me to take a drive out to the new location and take a look at it. I followed his advice and took a picture of the new St. Michaels. The brothers will be moving in before Christmas, Lord willing: 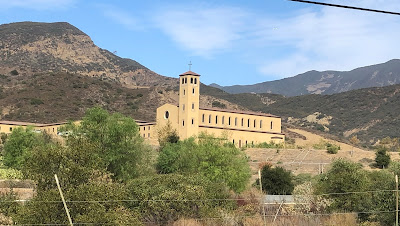 If you want to do more research on the Norbertines of St. Michael, their website can be found here.

After my morning with the Norbertines, I drove down to San Juan Capistrano to visit the mission there, one of the famous California missions founded by St. Junipero Serra (1713-1784). I had been to the mission before, but it had been several years. When I was last here I was in a group and had to stick with the group, so now I was looking forward to exploring it alone and at my own pace. The mission architecture and grounds are of course beautiful, as is the case with all the historic California missions. I had a great deal of peace and spiritual refreshment exploring the grounds, stopping to pray or just sit in the various little corners of beauty, and strolling the porticoes. The weather was fine, sunny but cool and breezy. 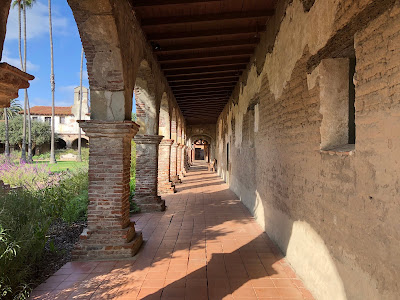 The mission chapel is particularly noteworthy. Though much of it is reconstructed, the reconstructions were done using materials from the same period taken from other similar structures and based on historical drawings and photographs. It is a very accurate representation of what St. Junipero must have seen when he offered Mass here: 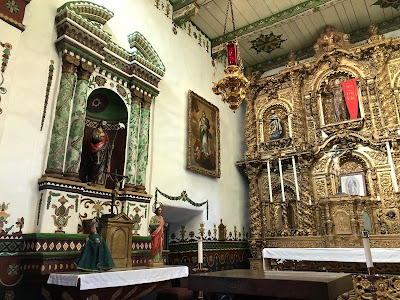 I was able to spend quite a bit of time in here in prayer. The mission was a little quieter than usual due to Covid I was told and I had the place to myself for some time. What a grace!

After this I wanted to make a trip up to the San Gabriel Mission, but I was informed by a docent that it had regrettably been destroyed over the summer in an apparent act of anti-Catholic arson.
Now it was late afternoon and I drove  from San Juan Capistrano over to Costa Mesa, where several friends had recommended I visit the parish of St. John the Baptist, a Norbertine parish that was reputed to have a very beautiful sanctuary and a Perpetual Adoration chapel. I was disappointed to find when I arrived that the Adoration chapel was closed due to Covid restrictions. So I went to pray in the church instead. As I walked in, I noticed there was an old woman kneeling on the sidewalk praying the Rosary. I was like "Um...okay I guess that's what they do here" and went past her. When I got into the church, I was blessed to find there was a wedding going on. I obviously kept my distance as not wanting to intrude on their special moment, but I walked in at the very end when the Bride and Groom are kneeling and getting ready to receive the final blessing from the priest after Communion. I snapped a picture of it because I thought it was such a lovely scene: 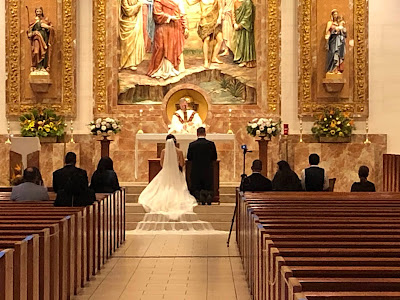 After the Bride and Groom left, I was able to spend some time praying alone in the sanctuary, just myself and some Filipino ladies who were saying the Rosary. I also walked about the parish grounds a bit and found this charming statue of Our Lady of Lavang, which is one of my favorite non-European depictions of the Blessed Virgin: 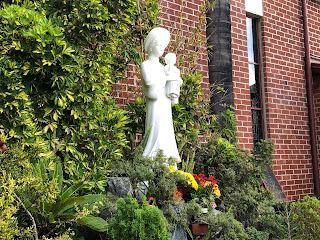 As I saw this image, I was really struck by the Catholicity of the Church. Here I was visiting a parish in the United States, an English speaking country. The bride at the wedding and her whole family seemed to be native Spanish speakers, while the groom and his side seemed to be native English speakers. Then there's these Filipino ladies praying in the chapel and a statue of a Vietnamese depiction of Mary in the back.

As I was leaving, I noticed the old lady was still kneeling outside praying the Rosary. Then I saw other people were kneeling in the grass, in the parking lot. It was super bizarre, so I turned to see what they were all kneeling towards. That was when I noticed the Blessed Sacrament was being displayed from the second story window of a building next door to the Church, presumably the Rectory. When Covid restrictions closed the Adoration chapel, the pastor had moved the sacrament to the rectory, which allowed people to adore from the parking lot. I immediately dropped to my knees, embarrassed that I had walked back and forth across this area multiple times without realizing what was going on. I took this picture, which I found profoundly moving: 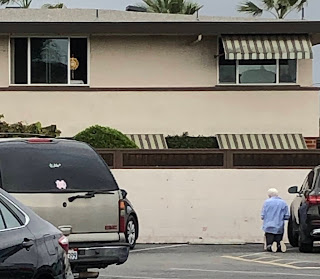 After the day was over, I felt a great peace in my soul. This was only a few days after the election, and everything nationally seemed to be in chaos. None of that seemed to matter though. It was so refreshing to see Catholic life going on as usual in all these places: monks chanting the Divine Office as they have since the time of St. Benedict; sitting in prayer before an altar upon which Masses were said before a United States of America ever existed; quietly fellowshipping with other Catholics of diverse backgrounds in the worship of the King of Kings in the Blessed Sacrament. Basically, experiencing the cliché but very true maxim that "God is still on the throne."
Posted by Boniface at 11:13 AM 1 comment: