That's the simple truth.
Posted by Boniface at 5:54 PM 14 comments:

The Phantasm of Fiat Continuity 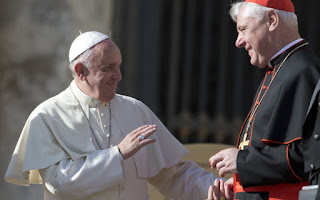 Back at the Second Vatican Council, the Declaration on Religious Liberty Dignitatis Humanae made a very interesting statement. The opening paragraph of the declaration states that the document "leaves untouched traditional Catholic doctrine on the moral duty of men and societies toward the true religion and toward the one Church of Christ" - and immediately after stating that traditional Catholic doctrine remains "untouched", goes on over fifteen chapters to propose things that had never before been expressed in any official organ of Catholic teaching. Theologians have been muddled ever since trying to figure out how such a novel document can be reconciled with tradition - how such a document can leave Catholic doctrine "untouched" while seemingly overturning it in every paragraph.

Not everybody is bothered by this. Many people will simply take the Declaration's statement that traditional doctrine is "untouched" as establishing the fact, as if there mere statement of continuity is all that matters.

One recent example is Pope Francis' off the cuff statements on intercommunion between Lutherans and Catholics. After seemingly suggesting that Lutherans could receive Communion in the Catholic Church if their conscience was clear about it, Cardinal Gerhard Müller stepped in to do damage control. But rather than explain how the pope's comments could be reconciled with Catholic doctrine, he merely declared that they were in line with Catholic doctrine and said other inferences were "misunderstandings" - all the while never addressing the pope's actual comments. Please see our article here for a more thorough review of this problem.

But who cares? Müller declared continuity so continuity is established.

A more recent example is the hubbub over Amoris Laetitia. Full disclosure: I did not read Amoris Laetitia. Maybe I will someday. I have better things to do with my time, honestly. But I have taken a look at some of the questionable passages, including the controversial footnote 351. And I have read a lot of commentary on it. From what I can see, my raw opinions on the document's controversial passages are fairly in line with what Ed Peters wrote on his blog a month ago. Peters is certainly no traditionalist, but he points out real, substantial problems with the document in terms of some of its assumptions and inherent confusions. Other critics have made further assumptions about the implications of the document (that it allows wiggle room for communion for adulterers, that it implicitly adopts a moral theology of gradualism, that downgrades the obligations of Christian marriage to the level of an ideal, etc).


I am not asserting any of these things, especially as I have not read the document. But others have, such as Athanasius Schneider, who said the document was vulnerable to misinterpretation and needed clarification.

But the party line so often is to simply state the document is in continuity without bothering to give us the details - without explaining how. Following the precedent set by Dignitatis Humanae, it's like they think that merely asserting continuity establishes the fact. Sometime over the years they stopped identifying the elements of continuity and restricted themselves to merely proclaiming it. Never mind how. Never mind that educated theologians, canonists and bishops still can't understand in what sense the documents have continuity. Continuity has been declared, ergo it exists by Magisterial fiat.

Thus with Amoris Laetitia. Cardinal Müller comes out and states that Amoris Laetitia is in perfect continuity with tradition. He states that Francis did not mean to call the teaching of his predecessors into question. Fine. But what about those passages that do seem to contradict Familiaris Consortio and Sacramentum Caritatis, like, you know, footnote 351? The cardinal says footnore 351 is only making some very general observations and that's about all we should take away from it, “Without going into detail." Without going into detail? Detail is what we need at this point, sir.

He then simply restates the traditional teaching and says that Amoris Laetitia "does not touch on the former discipline.” His only other comment on the footnote is that if the pope thought it was so important, he wouldn't have included it as merely a footnote.

None of this actually parses what the pope said or explains how it is in continuity; after all, Müller wanted to discuss it "without going into detail." But who cares? Continuity has been declared. The fact is established.

Cardinal Raymond Burke is another example. His essay on the Amoris Laetitia states that "the task of pastors and other teachers of the faith is to present it within the context of the Church’s teaching and discipline." I agree wholeheartedly. But when we don't understand how to reconcile certain statements with the Church's teaching and discipline, you need to tell us how, sir.

While he admirably addressed the false assertion that Christian marriage is merely an ideal, Burke likewise fails to offer us any way to reconcile the Pope's meanings with tradition. He states:

"The Church’s official doctrine, in fact, provides the irreplaceable interpretative key to the post-synodal apostolic exhortation, so that it may truly serve the good of all the faithful, uniting them ever more closely to Christ, who alone is our salvation. There can be no opposition or contradiction between the Church’s doctrine and her pastoral practice."

Yes! There can be no opposition between doctrine and practice. Now please explain how the document does not create such an opposition. Merely stating there isn't one does not establish anything.