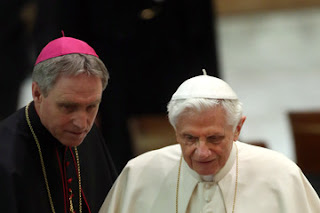 That's the simple truth.
Posted by Boniface at 5:54 PM

Do you have any information on Benedict/Ratzinger being a Teilhardian with examples? From time to time I hear about this and I would like to study it. Also, I think he has bit more than just nostalgia for the traditional liturgy, unless all his writings defending the objective value of the liturgy are simply fueled by blind nostalgia.

Thank you for the sober treatment of this matter.

Here, here. This is ridiculous topic that is getting far more attention than it deserves.

I do not have time to put together a comprehensive list of all the evidence (although I should), but please see:

"Cosmic Evolution in the Thought of Teilhard de Chardin and Benedict XVI" http://www.waragainstbeing.com/node/40

Excellent post. Thank you for citing The War Against Being blog; the writer there has chronicled Ratzinger's theological "journey" in a most eye-opening fashion.

Check out the second-to-last paragraph of this homily:
http://w2.vatican.va/content/benedict-xvi/en/homilies/2009/documents/hf_ben-xvi_hom_20090724_vespri-aosta.html

I'm not convinced that his affection for Tradition was merely nostalgia. I think it was a little more than that. But, he was/is susceptible to the modernist thinking that has saturated the Church. He was no gold standard pope. To be fair though, it's pretty clear that he did not abdicate on a fancy. So, I'm not sure if you can use that example as clear sign of indulgence in novelty. I am only referring to the act itself, not to how he is currently living out his, er...um, Petrine ministry. Despite this minor nitpick, I like what you wrote. Keep it up.

Yeah, I don't think it is *merely* nostalgic, but he certainly does not see Tradition as integral. It's like a value-added thing that "completes" the Church's identity but is not at the core of it.

Regarding the relation between Ratzinger and Teilhard, one ought to look further back to various right wing Hegelians like Vincenzo Gioberti or Rosmini. Then, after examining Hegel himself, one may look further back to Jaime Balmes, Leibniz, Malebranche, Cardinal Gerdil and Giambattista Vico. Finally, we may proceed to a careful examination of Scotism.

The comment above that says Benedict did not resign on a 'whim' makes the point. If Cardinal Ratzinger thought this out carefully, over time, the result must be what we hear Ganswein saying.
Barbara

Thanks for your thoughts, which make sense to me. But what does this all mean? If it makes no theological sense, what is the effect on the Francis papacy? If the Petrine office can't be split, is the resignation valid? Is the election valid? Is the Sede actually vacante, although it would appear unintentionally so? Maybe there is no answer at this point.

It means nothing other than that Benedict is not pope in any sense. There is only one pope and it is Pope Francis.