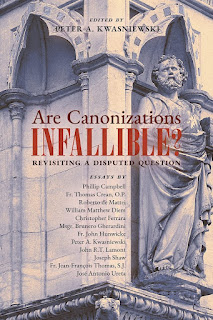 Arouca Press has published an excellent work for those interested in the debate about the infallibility of canonizations. Are Canonizations Infallible?, edited by Dr. Peter Kwasniewski, sets out be a comprehensive tome of reference for the subject, and in this it succeeds admirably. The book is set up as a series of essays on various aspects of the question; (in full-disclosure, I, too, have an essay in the book on the history of the Advocatus Diaboli, the Devil's Advocate). The structure of the book as a collection of essays makes it easily digestible, as the reader can peruse ala carte those subjects of highest interest to him.
My thoughts on this book are several:

I. First, I want to stress that this is a solid theological text, not a polemical work. I think some were expecting this book to be a collection of traditionalist maledictions on the canonizations of John Paul II and Paul VI; when I said I had an essay published in this book, Dave Armstrong immediately expressed dismay and embarrassment that I would participate in the project. I think he assumed it was just going to be a hackneyed trad critique of the modern papal saints. It's anything but. I was consistently struck by the scholarly tone of the book and how its authors are determined to get to the principles that underlay the question. This is a book for people serious about understanding the theological questions behind canonization. Some of the essays are dense and of a very technical nature.  Expect an enlightening read, but not necessarily an easy one.

III. It may be wondered if this book was written simply as a traddie protest in the wake of the canonizations of John Paul II and Paul VI. While its true that these canonizations have brought the question to the fore, you may be surprised to learn that the infallibility of canonizations has been debated for centuries. This book introduces the reader to the historical arguments, some dating back to the Reformation. Some of the essays in this book predate the canonizations of the modern popes; one of the pivotal essays, by Msgr. Brunero Gherardini, dates from 2003, long before the canonizations of John Paul II, Mother Teresa, or Paul VI were even issues. So, again, this book is not just a trad screed. It's a summary of a debate that has gone on for centuries. I wonder if the neo-Caths who immediately condemned this book before its publication are even aware that theologians have been discussing the matter since before Trent.
IV. Within that debate, however, it is freely admitted that non-infallibilism is the minority position; not just a minority position, but a small minority. Even anti-infallibilists like Msgr. Gherardini admit that they are a very small minority, that the weight of theological tradition is against them. While the question has not been definitively settled, the tradition of the Church is weightily in favor of infallibility. Gherardini says, "The overwhelming majority of theologians responded in the affirmative [i.e., favoring infallibility of canonizations as directly connected to Christian revelation]; those who lean towards a negative response or even a only a doubtful one are very few" (pg. 138). The same admits that the theologians marshalled in favor of infallibility are formidable: St. Thomas Aquinas, Melchior Cano, Suarez, and even "the acknowledged master in this matter", Prospero Lambertini himself (pg. 142). It is ironic, then, that the Traditionalist who seeks to demonstrate the non-infallibility of canonizations does so against the weight of the selfsame Tradition he seeks to defend. Of course, this issue has not been dogmatically defined, so there is room for discussion and development, but that does not change the fact that anti-infallibilism is not the traditional theological conclusion. What interesting times!
V. One thing I appreciated about this book is its continued explication over various essays on what infallibility does and does not mean. Since its definition in 1870, papal infallibility has resulted in a kind of "mission creep", investing supreme authority behind judgments of the Holy See that Christians should not have been required to assent to. There are precedents prior to Vatican II, but in modern times the most blatant example is how every casual utterance of a pope is taken as authoritative teaching. The result of all this is that the average Catholic has no clue what infallibility actually pertains to and what it means. For example, conservative Novus Ordo Catholics tend to extend infallibility to everything the pope says, such that they suffer from a kind of cognitive dissonance when forced to grapple with papal nonsense. On the other hand, Traditionalists tend to think if something is not infallible—or if its infallibility is merely doubtful—that it can be dismissed entirely, basically acting as though any official action of the pope can be entirely discarded if it does not proceed from the highest authority. This is the unconvincing "That's invalid so I don't have to listen to it" approach that rank and file Trads have been lazily trotting out for decades to avoid doing the heavy intellectual work of sorting through these difficulties. Are Canonizations Infallible? definitely does that heavy lifting for you. You will be educated about infallibility almost as much as about canonization. What does infallibility entail? What does it not entail? What is the ordinary vs. extraordinary Magisterium? What are the primary and secondary ends of an infallible declaration? What are dogmatic facts? What obligations does infallibility impose upon the faithful, and how do these obligations change if something is not infallible? This book will give you an excellent schooling in these questions.
VI. "Canonizations aren't infallible, therefore I can simply ignore canonizations I disapprove of." That is not the message of this book. Even those authors that argue against canonization are careful to point out that solemn but non-infallible teachings of the Church still oblige the respectful submission of the faithful, reservations not-withstanding. This book does not open the flood gates to every Catholic creating one's own hodge-podge pantheon of saints based one's own scruples. If it wasn't for contemporary concerns about a few specific canonizations, this book would hardly be controversial at all. Are Canonizations Infallible? is an excellent read for traditional Catholics, but it is especially appropriate for conservative Novus Ordo Catholics who want a scholarly, non-polemical introduction to the question.

In conclusion, I highly recommend Are Canonizations Infallible? and I commend the folks at Arouca Press for doing such good work on this and their other publications. I also want to thank Arouca and Dr. Kwasniewski for including me in such a scholarly and important work, something my credentials and scholarship hardly merit. But still, don't let my inclusion in the book be an argument against it; get yourself a copy and educate yourself about this important issue.
Posted by Boniface at 2:08 PM