The Jesuit Martyrs of Virginia 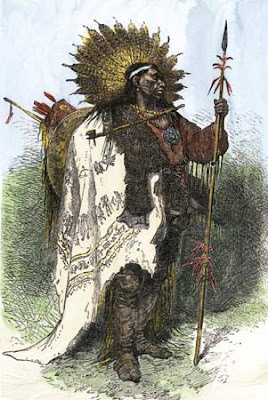 A Powhatan Indian Chief. The Powhatan Confederation inhabited Virginia during the first contact with Europeans in the late 16th century. They were a branch of the Algonquins.
When I think of the Jesuit martyrs, I instinctively think of men like St. Isaac Jogues and St. Jean de Brebeuf, martyred by the Iroquois in Canada in the mid-1600's, or perhaps to the martyrs for the faith in England, men like St. Edmund Campion and his illustrious co-religionists who perished under bloody Elizabeth. But have you ever heard of the Jesuit martyrs of Virginia?
On September 10th, 1570, thirty-seven years before Jamestown, a Spanish ship entered Chesapeake Bay, which was then called Bay of the Mother of God. Somewhere along the James River, not far from the later site of Jamestown, a small crew disembarked: two Jesuit priests, three Jesuit brothers, three novice Brothers, a Spanish boy and an Indian guide. The party was led by Jesuit Father Juan Baptista de Segura and was intent upon establishing a mission in the region of Virginia for the purpose of converting the Indians. This was the first true settlement in Virginia.
The hopes for the mission were placed on their young Indian guide, a man named Don Luis. Don Luis had been rescued at sea by the Spaniards some years earlier and was taken back to Spain, where he spent ten years learning Spanish customs and getting a rigorous instruction in the truths of the faith from the Spanish Jesuits. They small mission had placed much hope in this Don Luis -- he said that his uncle was a powerful chief in Virginia and that he would obtain material assistance for the Jesuits when they arrived. In consequence Fr. Segura -- perhaps naively -- had come with very little food or supplies, being told by Don Luis that they could get them all from his tribe.
At first Don Luis was helpful to the Jesuits, but being on his native soil made him restless, and gradually he began to lose the veneer of civilization that he had acquired in Spain. Finally, he abandoned the missionaries and went to live with the Indian's of his uncle's village, about a day and a half away. This betrayal was quite serious, for the Jesuits had depended on Don Luis as an intermediary to obtain food and supplies. The reality was, the Indian villagers near by had scarcely enough food to feed themselves, and there was also a drought devastating their crops that year. They were in no position to share food with the Jesuits.
Nevertheless, the Jesuits persisted in their mission amidst the difficulties. They set up a school for Indian boys and a chapel for daily Mass. The three novices made their professions into the Society of Jesus, the first recorded religious professions in the United States. The little community hung on.
However, word soon reached Fr. Segura that Don Luis had completely abandoned Christianity, had taken multiple wives and was living a dissolute lifestyle. Fr. Segura sent several messages to Don Luis begging him to reform, and finally settled upon sending three of his companions, Fr. Luis Quiros and Brothers Gabriel and Juan, to the village to persuade Don Luis to reform. The embassy was received with kindness in the village, and Don Luis listened to their words and promised to return with them to the mission the next day. The next morning, the party left for the mission, confident in Don Luis' good will. However, Don Luis appeared on the road with a band of warriors and slew all three of the Jesuits while they vainly attempted to figure out what was happening.
Fr. Segura was much concerned about the party, which did not return. Four days later, on February 9, 1571, Don Luis appeared at the mission at the head of a band of Indians. He told Fr. Segura that he had come to help him, and the good Fr. Segura fully welcomed him back as a prodigal come home. Don Luis and his men offered to cut some firewood for Fr. Segura, and so Fr. Segura allowed them into the storeroom to get some axes (big mistake!) -- once all of the Indians were armed, they raised a hideous war-whoop and fell upon Fr. Segura and the Jesuits, killing all of them. Only the young boy, Alonso de Olmos, was spared to be adopted into the local Indian tribe.
Several months later a supply ship arrived in thre James River and was suspicious when he saw some Indians on the shore dressed in Jesuit cassocks. The Spaniards engaged the Indians and took some prisoners, from whom they found out about the killing of the Jesuits and the captivity of the boy Alonso. Engraged, the Spanish colonists in Florida made a northern expedition the following year, 1572, and arrested the chief and several other Indians. They demanded the release of Alonso and the handing over of Don Luis for punishment. Alonso escaped and fled to the Spanish ship, buty Don Luis escaped and was never heard from again. The Spanish governor held court and condemned the captive Indians. Some were released, by seven were hanged as complicit in the murder of Fr. Segura.
Thus ended the Spanish attempts to settle in Virginia, and the first Jesuit mission in the New World. Why is this story not well known? Probably because the English colonists did not want to remind themselves that papists had been to Virginia first, and this intentional ignorance has trickled down to our own day. It is only recently that the Diocese of Richmond had opened the cause for the canonization of the Jesuit martyrs, and even many of grew up in Virginia say they were unaware of the story of the killings. At any rate, you can read more about it here.
Posted by Boniface at 8:18 AM

Spanish Roots of America a great

wonderfully revealing account of this continent's great
catholic history as a history of a new world meeting the old world.