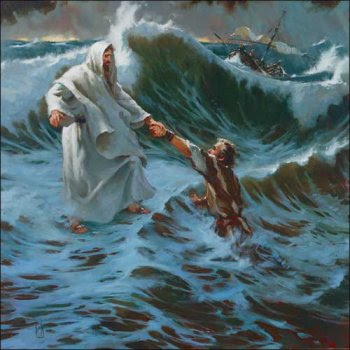 The importance attached to the theological virtue of faith among many Protestants is well known. For most Protestants, faith alone effects our justification, and this of course was the rallying cry of Luther's revolt against the Catholic Church. For a lot of Protestants, faith is not just important, it is all important to the exclusion of any other considerations. My father in law, for example, once told me that nobody goes to hell for adultery or murder or thievery or any other sin - according to him, every person in hell is in there for not having faith. I guess you could say that it is true that if the damned had persevered in faith that they might have obtained the grace of final perseverance, but I don't think you could say everybody in hell goes to hell just because of lack of faith.

This is tricky, because there is a Catholic way we could understand this. Certainly nobody who does go to heaven does so without faith, and people in hell can be said to have been lost through a lack of faith. Yet this is not the case because faith alone in and of itself is intrinsically sufficient to effect justification in us - it is but one element in a series of things that lead to heaven, mainly in the sense that the virtue of faith, besides being pleasing to God, disposes us to receive the actual graces God wants to shower upon us so that we can be rendered fit for heaven.

This got me thinking about grace and faith in Protestantism, and how among many Protestants, faith actually serves the same role that grace does in Catholic theology. For Catholics, grace is the very righteousness of God, according to the Council of Trent, "God's justice, not by which He Himself is just but by which He makes us just" (D 799). St. Paul likens grace to the very charity of God given to the elect: "The charity of God is poured forth in our heart by the Holy Ghost" (Rom. 5:5). Sanctifying grace is truly distinct from charity, though the Council of Trent spoke of grace in terms of charity (D 800).

Like charity to which it is so closely connected, grace is a vivifying principle, something that renders one acceptable to God and empowers one to conform themselves to the image of Christ. Without grace, nothing we do can have merit, and all the good we do comes as a result of God's grace in us, either actual or antecedent to whatever good we perform.

If we think about this, we see that this is the role assigned to faith in classical Protestantism. If we examine Luther's Larger Catechism we see faith identified as the vivifying principle in salvation:

For in the sight of God faith is what really renders a person holy, and alone serves Him, but the works are for the service of man (145).

...men cannot be justified before God by their own strength, merits, or works, but are freely justified for Christ's sake, through faith, when they believe that they are received into favor, and that their sins are forgiven for Christ's sake, who, by His death, has made satisfaction for our sins. This faith God imputes for righteousness in His sight.

Notice that in Catholicism, grace is defined as the righteousness of God communicated to man which in turn makes Him righteous and holy. This is almost exactly what Protestants believe concerning faith. Protestants today use the same language: works must be done "in faith" in order to be acceptable to God (and even then they don't have any intrinsic merit); trusting in anything other than faith alone is tantamount to arrogant idolatry, just as in Catholic it would be in Catholic theology to assert that man can merit without grace; faith is what is sought to get one through difficult trials and periods of darkness, just as we would implore God's grace; Protestants believe we are saved by "faith alone" and Catholics say the same thing about grace. In most aspects of Protestantism, faith is seen the way we view grace.

Of course, faith and grace are connected, as faith is a virtue that we receive by grace, and grace enables our faith to be lively and meritorious. But they are not equivalent terms. It is interesting, with all the emphasis on faith, what role grace plays in Protestantism. In Luther's Small Catechism, there is no entry for grace and no chapter on it. So much is made of faith that there is little for grace to do except serve as a figure of speech ("by the grace of God", etc.)

Though faith plays the same role in Luther's theology that grace does in Catholic theology, there is a still greater difference. Grace is something external, objective and transformative. Faith, at least the kind Luther espoused, was internal, subjective and ultimately served only to give the sinner "imputed" righteousness.

With all the tremendous emphasis on faith in Protestantism, both classic and modern, it would be interesting to see what role they assign grace in the life of the Christian. If faith is the operative element that accomplishes everything, strengthens the believer and makes his prayers and deeds meritorious, indeed even rendering us justified, what is there left for grace to do?
Posted by Boniface at 8:41 AM

1) The idea of being damned just because you don't have faith is something Trent quoted the Bible as explicitly condemning. Rev 21:8 says "unbelievers" is ONE of a host of damnable sins, meaning you can have faith but sin in other stuff.

2) For the Grace distinction, Protestants love to quote Eph 2:8, but it actually supports the CATHOLIC notion of Grace!!! Check this out:
http://catholicdefense.googlepages.com/eph2

3) You are making a slight mistake on how you are reading "faith" for Protestants. They are adamant that faith ITSELF is not what renders a man holy and in fact believe faith has no inherent value. Faith acts merely like an "empty hand" that takes hold of "Christ's Righteousness" (an unBiblical concept). They are certainly not substituting the Catholic notion of grace with faith.