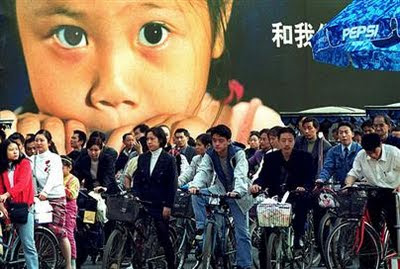 I think I just read the worst thing to be churned out of the anti-Christ, liberal-dominated mainstream media this year: an impassioned plea from a Canadian newspaper for the world to adopt a global one-child policy using China as the model.

Now then, I'm not going to comment on this because I think it defies commentary - I am so revolted by the sentiments of this ignoramus (and yes, she is an ignoramus) that I wouldn't know where to begin. Here's what I'd like us all to do though - let's hammer her Inbox with emails letting her know what we think about her despicable globalist agenda. Her name is Diane Francis and her email address is:

I sent her one encouraging all liberals and globalists to take her advice, because if so, large Catholic families would inherit the earth in a few generations after these insane earth-worshipers contracept and abort themselves out of existence.

Anyhow, please consider passing this email address and the article around to your friends (particularly those with large families) and blast this wacko's email with a slew of angry (but coherent and well-reasoned) emails.

You are encouraged to post the text of your emails in the combox here.
Posted by Boniface at 1:30 PM

I'd like to look on the bright side and believe that she represents a vocal psychotic minority. Possible? But why did anyone agree to print this?

I did send her an email relating my disapproval.

I think she is a psychotic minority, but one that is poised to impose their views on everybody else. Here's how it will go down:

1) Get everybody on board with the dangers of "climate change"

2) Use this support to enact laws regulating carbon emissions.

3) Convince people that reducing population growth is the key to reducing emissions.

5) Faithful Christians get their guns and ammo, head for the hills and start taking people out.

Check out this article from China, saying the same thing as the Canadian article - that the rest of the world needs to get on board with China's policy.

Was there supposed to be a link? Were you possibly referring to this article?

Good analysis, at least of points one through four. Regarding five and "taking people out", I suppose it depends on what kind of one child policy gets enacted. If it is merely fining people for having more kids, I don't think that justifies killing people. But if they start mandating forced abortions...well, then I'd say your point five comes into play.

The title to my e-mail was: "We have three kids already and want four more." Inside I wrote, "I thought that might get your attention. Your one-child policy is insane, especially when we are about to fall off the cliff into sharp population decline. Nothing you Malthusians have ever said comes true--nothing. Jon B. Augusta, GA. (USA)"

Get your parenting license ready!

"Oh look comrade, you've already been stamped. We're going to give you an abortion now, followed by mandatory sterilization."

It already happened to my wife's family in the 1980s. My wife remembers her mother coming home sobbing after being "volunteered" to set a example for the younger women in that particular company.

Mao was correct, "Power comes from the barrel of a gun." The state is not your friend; neither are the statists.