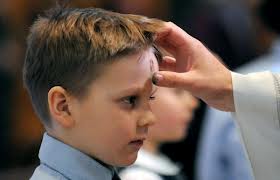 
I recall reading or hearing somewhere that Ash Wednesday and Palm Sunday are two of the Church's holidays that have the highest average Mass attendance, even greater than Christmas or Easter. What is the reason behind this? Because on these two days we "get" something; you get to walk away wish ashes on your head or palms in your hand. I remember with amusement a former secretary at our parish telling me how in the days leading up to Lent people would call and say, "When do we get ashes?" or before Easter, "What time to we come get palms?" The secretary would politely rephrase the question: "Oh, you mean what time is the Ash Wednesday Mass?"

Ash Wednesday is ultimately not about getting anything but about giving something - giving up on our selfishness and sinful inclinations to embrace penance in preparation for the Holy Feast of Easter. It is paradoxically the fact that when we come to Mass willing to give up our own will that we actually receive the most in graces from God.

One very amusing Ash Wednesday story - this happened in Florida around 2000. I knew a girl who had just recently converted to Christianity (a generic, non-denominational Protestantism) and had moved from Michigan down to Florida to work for a time; I think she was around 20 years old. Anyhow, though she was ignorant of Catholicism or Catholic customs, she had a cursory knowledge of the Bible, a very humble heart and was a model of charity. So she was working in a shop down in Florida on Ash Wednesday. All the Cuban and Puerto Ricans would come into the shop with ashes on their heads, of course just going about their business as usual. At first the girl thought that it was just one or two who had dirt on their head, but throughout the day more and more people of every stripe came in, each with ashes on their forehead and each acting completely normal, apparently oblivious to the presence of the ashes.

This girl, who truly knew nothing of the custom and was astonished, could not figure out why everybody had this ashen sign of the cross on their head. Eventually she recalled vaguely the words of the Book of Revelation, which tell us that before the time of the end God will "seal" His elect on their foreheads to protect them from the tribulations accompanying the punishment of the wicked at the end of the world. She quickly ran to the bathroom and looked in the mirror, where to her horror she saw that she did not have the mark. She tried to go back to her work but soon began sobbing, thinking that the end was upon her and that she had not been counted worthy to be sealed with the elect. Her manager came up to her, and upon hearing what was the matter, hugged and comforted this young girl, explaining to her the Catholic custom of receiving ashes on Ash Wednesday and assuring her that everything was fine.

Not an Ash Wednesday passes that I don't recall this story, and it still moves me, thinking about a humble and simple girl weeping at the thought that she had been reprobated.

Well, I hope you all have a blessed Ash Wednesday and a fruitful and penitential Lent!
Posted by Boniface at 2:00 PM