If you are Welsh, then today (March 1st) is the feast of your nation's patron saint, David of Wales (Degui, Dewi). The Catholic tradition of Wales is very ancient and beautiful, though unfortunately little known outside of that corner of Britain. This is a true shame, for these old saints were an integral part of the local devotional life of Catholics in the Middle Ages; for the average Welshman of the 11th century, St. David would have been a much more familiar name than St. Augustine or St. Ambrose. Medieval Catholicism, like everything else medieval, was colored by localism. Modern approaches to Catholic saints tend to focus on the lives of the "great ones" with a bird's eye view of how they changed or edified the Church Universal; for the medieval, how a saint changed or edified the Universal Church was not as interesting as the preaching and holy deeds that they did at this specific hill, that particular well or this certain bend in the road. Piety was tied to localism that was vivified by the memory of what this or that saint did at certain hallowed sites.
I think the memory of a lot of these older, more "local" saints of Britain is obscured for three main reasons (1) Their suppression following the Norman conquest and, later, the advent of Anglicanism (2) Their being overshadowed by the more "sensational" and universal saints of the High Middle Ages such as Francis, Dominic and Bernard (3) The simple passing of centuries that "like an ever rolling stream bears all her sons away", along with their memories. Last year I had a series of posts called "Obscure Anglo-Saxon Saints" that I did on saints of England prior to the Norman Conquest. I think that, starting with this post, I am going to continue this series but expand it beyond Anglo-Saxon saints to any of the great old saints of Scotland, Ireland or Wales, these marvelous, wonderworking saints who flourished prior to the year 1000.

Saint David was conceived through rape, and some sources suggest that his mother was a nun (although it is also possible that this is a corruption of a proper name, "Nonna" or "Nonnita"); his father was a lord of the house of the king of Ceredigion, though the records are ambiguous as to whether the father was the king himself, the king's brother or one of the king's sons.

The various Lives of St. David suggest that even his birth was miraculous: St. Patrick is reputed to have had a prophecy of David's birth thirty years before the fact, and at the saint's baptism (c. 500) a blind man was cured. The young David was sent to learn at the feet of of St. Illtyd (along with other Welsh saints such as Samson of Dol and Gildas) and then studied Scripture under St. Paulinus of Whitland for ten years.
The young David was sent out as a missionary priest among the British and found or restored twelve monasteries. The greatest of these was undoubtedly Glastonbury, which in the Norman era became the wealthiest monastery in the kingdom. Glastonbury is also remembered for its connections with the Holy Grail and the Arthurian legends (Arthur and Guinivere are purported to be buried there) as well as for the famous Glastonbury Thorn, a species of Hawthorne which bloomed only twice per year, once in May and once on Christmas. The original Glastonbury Thorn was cut down and burned by Cromwell's troops as a remnant of medieval superstition; another incarnation of the thorn existed until 1991. The sapphire altar of Glastonbury was one of the items plundered when Henry VIII seized the assets of the monastery during the Dissolution. 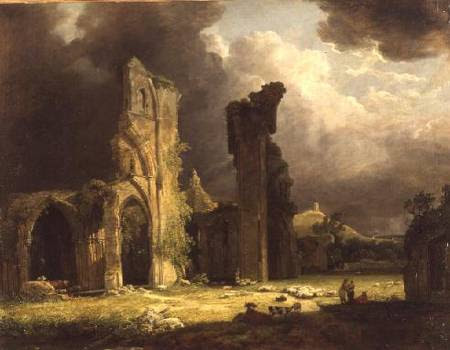 Glastonbury Abbey by George Arnald (c. 1840)
The Rule that David established in the monasteries was austere: monks had to pull the plough themselves without draught animals; to drink only water; to eat only bread with salt and herbs; and to spend the evenings in prayer, reading and writing. No personal possessions were allowed: to say "my book" was an offence. He lived simply and practiced rigorous acseticism , teaching his followers to refrain from eating meat or drinking beer.
His austere measures provoked anger by many monks, and like St. Benedict he was victim of some unsavory attempts at removing him. This perhaps led to his pilgrimage to Jerusalem where he received episcopal consecration by the hands of the Patriarch (possibly Peter or Macarics II). He was quickly recalled to Wales, however, to deal with the Pelagian heresy which was then raging throughout Britain. The Synod of Brevi was convened around 550; so eloquently did David preach that he was soon after appointed to the highest see in Wales, the Archbishopric of Caerleon. This Synod was also the occasion of his most famous miracle, in which the earth rose up beneath his feet as he preached, forming a small hill so as to better amplify his voice. The hill still exists today and his venerated in the village of Llanddewi Brefi, which means "Church of David on the [River] Brefi."
According to St. David's chronicler Rhygyfarch, David obtained the permission of King Arthur to remove his see from Caerleon to Menevia, from whence he governed the British Church for many years with great holiness and wisdom. He died at the great age of 147, on the day predicted by himself a week earlier. It is interesting that despite the fanciful age given at the time of David's death (147), various chronicles all agree that he lived to an extreme old age (at least 100) and all agree that he passed on Tuesday, March 1st. The traditional year of his death is 589.

Some of David's words to his brethren as he passed have gone on to become a well known phrase in Wales: According to Rhygyfarch, David's last words were, "Be joyful, and keep your faith and your creed. Do the little things that you have seen me do and heard about. I will walk the path that our fathers have trod before us.' 'Do the little things in life' ('Gwnewch y pethau bychain mewn bywyd') is today a very well-known phrase in Welsh. In the later struggles of Wales against the English, St. David was invoked before battle in a prophetic phrase which looked forward to the day when the saint would deliver the Welsh from the hand of their oppressors: "A lluman glân Dewi a ddyrchafant" (And they will raise the pure banner of Dewi) became a battle cry.

St. David's relics were transferred to Glastonbury in the 10th century. St. David is depicted with a dove on his shoulder, usually holding a leek, which is derived from a story in which the Welsh and Saxons were about to go to battle found they could not distinguish themselves from one another; therefore, David counseled the Welsh to wear leeks in their hats.
Posted by Boniface at 1:43 PM