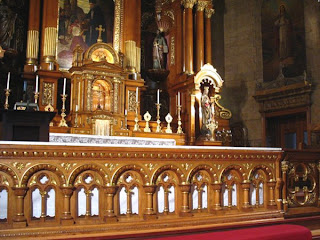 Even more interesting is that, in my experience in taking RCIA catechumens down to the traditional Mass, the vast majority of those who express great enthusiasm at the traditional liturgy are those with very little exposure to Catholicism or to any liturgy at all - most RCIA catechumens are either those with little religious background or else candidates converting from non-Catholic denominations; in either case, they are persons with very little contact with the Catholic liturgy, save through what they get through the nine months of RCIA. These are persons coming to the liturgy off the street, without any knowledge of pre-V2/post-V2 controversies or the abuses done in the name of the Spirit of Vatican II; they are essentially open slates regarding all things liturgical and walk into the traditional liturgy completely blind. Yet year after year they report a very positive experience with the traditional Mass.

In contrast, many parishes that have attempted to move their liturgies in a more traditional direction often face opposition not from the newly baptized who don't find tradition relevant, but rather from life-long parishioners who have in one way or another invested a lot in the slipshod "Spirit of Vatican II" approach to liturgy. It is those who have the most vested interest in preserving an emasculated and desacralized Novus Ordo that voice the most opposition to tradition. I have seen this dynamic played out in a number of parishes, a few from my own experience and many that I have heard of from friends - the newly baptized/converted are curious and excited about the Traditional Latin Mass while the life-long parishioners are most opposed to it. Those who know least about Catholicism are most open to Tradition; those who have been lifelong Catholics and ought to know the Tradition are most opposed to it.

This is an interesting trend when we stop to think about the accessibility of the old Mass to the laity, meaning the degree to which the symbols, rites and dynamic of the old Mass are meaningful and relevant to the laity. If we are to believe the liberals of the Church, the old Mass is utterly inaccessible to modern man because of its archaic structure, dead language and obsolete clericalism. Despite the knee-jerk way that this assumption is supported by many in the Church, experience clearly contradicts it, since there are many who derive great meaning and value from the old Mass.

Yet, it could be argued, this value is probably only realized by those experts in tradition and liturgy, those Catholics who make tradition a matter of study as well as devotion. Some may thus grant that the old Mass could be meaningful to those Denzinger-quoting, Scholastically trained Latinists who thoroughly understand the traditional rites. This means that the old Mass would, at best, have a limited accessibility.

This would imply two things: first, that meaningful experience of the liturgy is tied to intellectual knowledge, and second, that the majority of the laity fall so far short of this requisite knowledge as to make the old Mass practically unintelligible and so distant from the average layman as to make any progress in catechesis unworthy of the effort. Any effort to introduce the traditional liturgy would be tied to the ability of the congregation to receive instruction which, as we discussed above, would be limited by the resistance of certain members of the parish to anything traditional. This would leave power in the hands of a  pastor who was unsympathetic, or even just timid, to perpetually put off saying the old Mass because "the people are not ready."

I admit that I have wrestled with this conundrum - introducing the traditional Mass would require widespread catechesis, but this catechesis would be rejected or ignored by a significant segment of the congregation who were predisposed to dislike the old Mass, prompting a perpetual state of unreadiness by the congregation. What's the solution for the mainstream? Impose the old Mass against the will of the parish and risk alienating them further in order to appease the minority who will possibly appreciate it? Or subject the institution of the old Mass to a democratic vote, which may succeed in getting the old Mass in place but upon the faulty proposition that such liturgical matters are subject to the whims of the people? How can a parish best transition to the traditional Mass, even on a limited basis?


Fortunately, the solution is that the paradigm we have been working with is not the whole picture. It is simply not true that everybody needs to be educated and catechized into the fine points of liturgy in general or the old Mass in particular in order to enjoy it. This brings me back to the original insight I referenced with regards to noticing that those with virtually no knowledge or experience of liturgy of any sort frequently report a wonderful receptivity to the Traditonal Mass. Despite the fact that a practical knowledge of the basics of the old Mass and the meaning of some of the prayers/rites is commendable, it is by no means necessary. It is not necessary to say the responses and "actively participate" in the old Mass such as one does in the new; it is not even necessary to have a thorough understanding of the real fruits of the Mass, as demonstrated by the praise for the old Mass reported by those catechumens I take to it who are virtually pulled in "off the street" as it were.

What does this mean for the expansion of the Traditional Mass in parishes? I think it means that we should recapture part of the Church's instructional methodology that has been somewhat lost in the West but endures in the East. In the West, there is currently a great emphasis on catechesis prior to initiation into the Church, of making sure a person knows and experiences Christianity prior to being fully inducted into Christian life (as evidenced by the ever increasing age for Confirmation in many dioceses). The East, however, the focus is on mystagogy, which is post-sacramental instruction done after the fact - explaining what people have been initiated into after they initiation is complete (a corrolary would be the Eastern practice of Confirming in infancy). Persons are first initiated into the mystery, taught to love the tradition, and then are trained to understand what they already know and experience.


How can we get the old Mass in our parishes? How about we just start saying it. That's it. Let's just start doing the Traditional Latin Mass. No months of going back and forth about the "readiness" of the congregation - just start doing the Mass, invite people to it, get them accustomed to what it is and what it looks like and then teach them the rest on the way. Isn't that how everything else in life is? The Traditional Latin Mass has an innate aesthetic appeal that can bring meaning to the lay person irregardless of their liturgical training or competency in Latin. I say we expose people to this aesthetic appeal first and then fill in the gaps later. Isn't that how we all came ot understand Mass in general? Our parents take us when we are little (or some friend takes us as an adult) and we gradually fill in our knowledge as we grow in our praxis.

Unfortunately, this plan requires definitive action. Not talking about it, discussing it, going round and around it, but just doing the old Mass first and letting everything else fall into place later. Can this really happen? I think to the extent that Tradition becomes more widespread in American parishes, to that same extent will pastors start getting emboldened to just do the old Mass and see that, despite what the liberals say, the Traditional Latin Mass is amazingly accessible to the lay person, whether trained in liturgy or walking in off the street. Pope Benedict has charted the course - let's see where it goes.

Related Articles:
"It's all about God"
Liturgical Minimalism Hurts the Poor
Posted by Boniface at 7:26 PM