Sacral Kingship: The Emperor as Pius and Victor (Part 4) 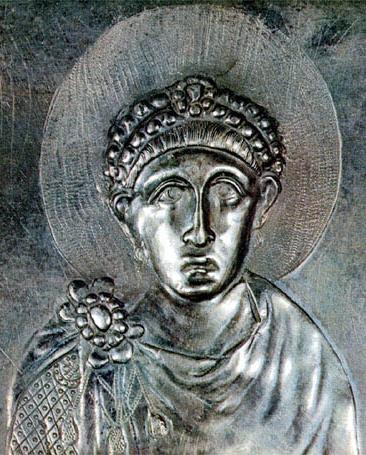 Part 4 of my work on Christian Kingship, looking at the ideologies of power surrounding the first Christian Emperors of Rome. Comments and suggestions are welcome.

[Constantine entered the chamber] like some heavenly messenger of God, clothed in raiment which glittered as it were with rays of light, reflecting the glowing radiance of a purple robe, and adorned with the brilliant splendor of gold and precious stones….it was evident that he was distinguished by piety and godly fear. This was indicated by his downcast eyes, the blush on his countenance, and his gait….he surpassed all present in height of stature and dignity of form….As soon as he had advanced to the upper end of the seats, at first he remained standing, and when a low chair of wrought gold had been set for him, he waited until the bishops beckoned him, and then sat down, and after him the whole assembly did the same.10

This is far removed from the republican modesty of Augustus! This example demonstrates how clearly ideas about authority and the image of power had changed by the Christian era. Notice that his piety is ascertained by his “downcast eyes” and serious countenance. Christian emperors, as the anointed of God, tried very hard to appear as “other” from the rest of humanity. Out of deference, the bishops remained standing until the Emperor sat down, but lay people who supplicated the Christian emperors of the east usually were required to do more homage, such as prostrations. The idea of one emperor anointed by God fit in well with Christian theology. After all, if there was but “one body and one Spirit…one Lord, one faith, one baptism; one God and Father of all”11 as St. Paul had taught, why not also one emperor ruling earth in God’s name? The concept seemed appropriate to Christian thought. Christian emperors at Constantinople consequently transformed their courts into conscious imitations of the heavenly court, thus proclaiming their piety and displaying their power. Perhaps this was done in imitation of the way the early Christian liturgies were meant to mimic the heavenly liturgy revealed in the Apocalypse. Either way, the message got across. Eusebius himself understood this court symbolism and said of Constantine’s banquet following the opening of Nicaea, “One might have thought that a picture of Christ’s kingdom was thus shadowed forth, and a dream rather than a reality.”12
About half a century later, when Constantine’s son Constantius II visited the city of Rome, the image of the emperor as “other” than the people had been more refined. The imperial procession is described by Ammianus Marcellinus:

[E]scorted by formidable troops…he was conducted, so to speak, in battle array and everyone’s eyes were riveted upon him with fixed gaze….while the standards preceded him on each side, he himself sat alone upon a golden car in the resplendent blaze of shimmering precious stones, whose mingled glitter seemed to form a shifting light….And their marched on either side of him twin lines of infantrymen with shields and crests gleaming with glittering rays, clad in shining mail….Accordingly, being saluted as Augustus with favoring shouts, while hills and shores thundered out the roar, he never stirred…as if his neck were in a vice, he kept the gaze of his eyes straight ahead, and turned his face neither to the right nor to the left, but (as if he were a lay figure) neither did he nod when the wheel jolted nor was he ever seen to spit, or to wipe or rub his face or nose, or to move his hands about. And although this was affectation on his part, yet these and various other features of his more intimate life were tokens of no slight endurance, granted to him alone, as was given to be understood.13

I'm enjoying this series very much.