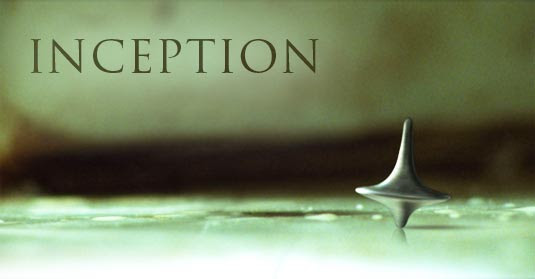 I normally don't go out and see new movies that everybody is talking about; usually the fact that everybody is talking about a movie is a guarantee that the said movie is stupid, banal, etc. However, after hearing both Youth Group kids and many parents (whose opinions I respect), as well as some Catholic reviewers tell me how excellent Inception is, I decided to go out and see it.
This is advertised as a film that "makes you think" by playing with reality via dream sequences; i.e., creating a tension in which the viewer is never sure whether or not the main character is dreaming. This initially made me skeptical; the first film I can recall in my day that did this was the early 90's Schwarzeneggar flick Total Recall, which was alright but was kind of a dud. A decade later M. Night Shyamalan tried this again with The Sixth Sense, which everybody raves about to this day but which I found boring and unconvincing. Thus, when I heard that Inception had to do with dream sequences and alternate realities, I immediately thought of Sixth Sense and prepared myself for a stinker.
Boy, was I mistaken! Inception proved to be a true delight. Somewhat of an action movie, somewhat of a philosophical statement about our perceptions of reality and somewhat a love story about coping with loss, Incepetion is hard to categorize, but it is best understood as a modern take on the myth of Theseus. I'm not going to say too much more about this, but you'll understand if you see the movie.
I don't really want to give too much away about the film, save to say that it deals with the concept of individuals called "extractors" being able to get into other people's minds via their dreams in order to obtain access to hidden thoughts or (in some cases) to plant thoughts. The main plot has to do with the attempt of protagonist Tom Cobb (DiCaprio) and a team of expert "extractors" to get inside the head of the young heir to a corporate empire in order to plant a thought in his subconscious, a procedure called "inception." Why they want to do this is too complicated for me to go into here; the back story isn't too important. to get into, because all the viewer really cares about is the fascinating interplay between dream and reality as the extractors go deeper and deeper into the subconscious of the dreamer: a dream within a dream within a dream within a dream, each successive dream or "layer" getting more surreal than the last.
Despite all the talk about dreams, the film manages to deal with many interesting issues surrounding the topic without even once straying into the realms of the New Age or the paranormal, which would have been very easy to do.  Thankfully it doesn't go there; it's approach is more scientific and philosophical, not pseudo-spiritual.
It is also quite clean - there is absolutely no sexuality or sensuality at all. The name of God is blasphemed about three times. Blasphemy is always regrettable, but it is not gratuitous. What do I mean by this? Well, in some movies there is a lot of blasphemy simply because the characters are made to be blasphemers; so a character is made to blaspheme constantly in the course of normal conversation. This sort of blasphemy is especially reprehensible. But then there is a more "realistic" sort of blasphemy; for example, in this film, the main character takes the Lord's name in vain after witnessing his wife commit suicide (sorry for the spoiler). This, though still regrettable, is less offensive to me because I can readily imagine that a real person who witnessed their wife kill herself before his eyes might say God's name in this manner. It is way more realistic; I'm not condoning it at all, but I am saying that it is not gratuitous. I hope you understand what I'm getting at.
The film has one of those endings that leaves you on the edge and makes you walk away wondering. Beyond that I am not going to say much more.
This was one of the only films all year that is worth going to see in the theater. The plot was excellent, the movie was engaging, it had the right balance of action, thoughtfulness and tension; Leonardo DiCaprio did an excellent job and the film even managed to work in themes from Greek mythology. There is a very strong theme of warning about what can go wrong when one tries to pursue fleeting fantasies instead of the truth, and the protagonist Cobb, despite delving into the depths of the subconscious, remains committed to the existence of a ground of reality "up there."
Except for the very few occasions of blasphemy, it was a great film. I give it three out of three papal tiaras (by the way, please note that tiaras are just my version of thumbs up or stars; the fact that I give a film two or three papal tiaras doesn't necessarily mean it's a Catholic film - it just means it was a good movie). 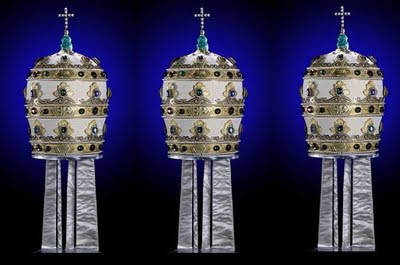 Speaking of blaphemy in movies, wouldn't it be sinful to watch a movie that one knows contains blasphemy?

My wife and I watched part of a movie tonight that contained irreverent usage of the name of God and I am wondering if we can continue watching it because of that.

What are your thoughts on the issue?

Well, everybody has their own threshold of tolerance on this. I am willing to allow for blasphemy a few times; but if I see it is constant and in regular dialogue, then usually I won't continue.

On the other hand, sometimes we are very sensitive to blasphemy in the movies but not at all sensitive about blasphemy in literature. In Flannery O' Connor's short stories her characters blaspheme quite a lot - even in classic stuff like Song of Roland we have "God's blood!" and "God's bones!" being used as blasphemies. In literature we seem to look over this as part of the stylistic elements - a character that blasphemes tells us something about the character. When it comes to film, we seem to be not so forgiving.

This is a different question from whether or not the actor sins when he blasphemes in a film - in a novel, there is no "real" character who is doing the blasphemy, unlike in a movie where a real human being is uttering the blasphemy. I have dealt with this topic in the following post if you are interested, though it is just conjecture:

I liked the way you jumped referenced between religion and reviewing the movie. thank you for you review!