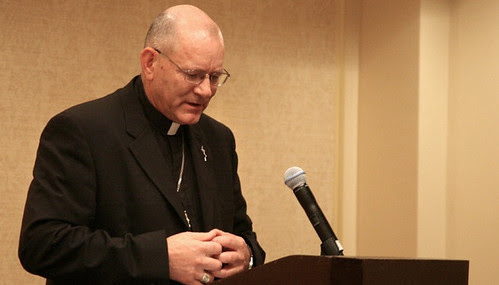 Many of you may have already heard about Bishop Robert Vasa's recent statements on the relationship between the USCCB and individual bishops, in which the bishop reminds us that the directives of the USCCB have no binding authority on bishops. Too often the USCCB is viewed as a kind of authoritative regulatory agency for the episcopacy. Vasa has given us a timely reminder that the USCCB exists to serve bishops, not vice versa.
His comments have already been widely disseminated via Lifesite News and the Wanderer. I couldn't find an actual transcript of the talk, so what I have done here is pulled his comments out of the Lifesite article and strung them together to get a basic paraphrase of his comments, which I think are tremendously important. No true reform can hold in the United States until the USCCB is defanged. Bishop Vasa said:
[S]tatements from bishops’ conferences necessarily tend to be "flattened" and "vague," allowing certain teachings to "fall by the wayside through what could be called, charitably, a kind of benign pastoral neglect." While some call this compassion, “in truth, it often entails a complicity or a compromise with evil.  The harder and less popular teachings are left largely unspoken, thereby implicitly giving tacit approval to erroneous or misleading theological opinions... I fear that there has been such a steady diet of such flattened documents that anything issued by individual bishops that contains some element of strength is readily and roundly condemned or simply dismissed as being out of touch with the conference or in conflict with what other bishops might do. USCCB pastoral documents are “are open to a broad range of interpretation and misinterpretation. ... A charge could be brought that such documents are intentionally vague and misleading. While I have had an occasional suspicion of this myself, it would be a serious defect of charity on my part to speculate about whether this is actually the case, I would say that the vagueness, whether intentional or not, has occasionally been a cause of concern and even consternation.

While [the USCCB] is both practical and desirable” for communication and joint efforts such as liturgical translations and disaster relief, there is “room for concern about the tendency of the conference to take on a life of its own and to begin to replace or displace the proper role of individual bishops, even in their own dioceses. It is easy to forget that the conference is the vehicle to assist bishops in cooperating with each other and not a separate regulatory commission. There may also be an unfortunate tendency on the part of bishops to abdicate to the conference a portion of their episcopal role and duty. Statements from individual bishops "are often stronger, bolder, more decisive, and thus more likely to be criticized as harsh and insensitive. Gentle appeals have their place but when constant appeal produces absolutely no movement toward self-correction, reform or conversion, then reproving and correcting, become necessary. At some point, there needs to be a bold resistance to the powers of the world in defense of the flock the fear of offending one contemptuously dissident member of the flock often redounds to a failure to defend the flock. It can redound to a failure to teach the truth.” (source)
By the way, what Bishop Vasa is speaking of when he refers to certain "difficult" teachings being allowed to simply fall by the wayside by "benign pastoral neglect", he is affirming what I was getting at in my previous post on the modern Church's "ex voce" teachings: official teachings aren't contradicted, but rather ignored, giving way to erroneous or ambiguous teachings that are promulgated through lower, unofficial organs such as bishop's conferences. Kudos to Bishop Vasa for saying what needed to be said and for doing so in a manner more eloquent and forceful than what I could have done.
Posted by Boniface at 9:24 PM

Glad to see this here. I have been surprised by some of the documents that have come out by the USSCB ( I'm thinking of the Reflections on Covenant and Mission one specifically) and was a little confused about how much authority this group holds. This clears it up a bit.