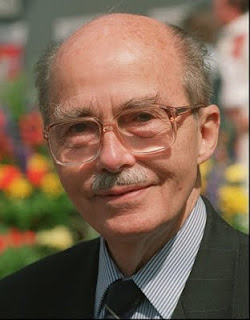 This week marked the passing of Archduke Otto von Hapsburg, the eldest son of  Blessed Karl of Austria, head of the House of Hapsburg and last crowned prince of the venerable Hapsburg family.Otto passed away in his sleep on July 4th at the venerable age of 99.
Otto was born in 1912, only two years before the Austro-Hungarian empire would be engulfed in the First World War. He became Crown-Prince of Austria in 1916 when his father took the imperial throne but was forced from Vienna after the war when the Austro-Hungarian empire. When Blessed Karl died in 1922, Otto assumed the leadership of the Hapsburg house.
From 1922 to 1961 he tirelessly advocated for the the restoration of the Hapsburg monarchy and claimed the throne of Austria; at the same time, he opposed Nazism, Communism and worked for pan-European cooperation. Otto was a devoted Catholic and believed that, after the horrors of two World Wars and the spectre of Communism looming over the world, the greatest way to ensure peace in Europe was through a pan-European association based loosely on the old Holy Roman Empire. To this end, he served as Vice President (1957–1973) and President (1973–2004) of the International Paneuropean Union, and served as a Member of the European Parliament for the Christian Social Union of Bavaria (CSU) 1979–1999.
Shamefully, Otto was banned from his homeland of Austria after World War II and the establishment of the Austrian Republic. Despite his heroic opposition to Hitler during the thirties, the Austrian Republic continued to ban Otto from his homeland, leaving him stateless (he was, however, granted honorary citizenship in over 1,300 Austrian towns, was an Knight of Malta and was even offered the throne of Spain by Francisco Franco in 1961). The Austrian authorities took the Hapsburg ban very seriously; if it was rumored that Otto was in the country, police would be dispatched to search for him, as he was labeled an enemy of the state.
Finally, in 1961, Otto signed an agreement with the government of Austria formally renouncing all his claims to the throne and promising to stay out of Austrian politics in exchange for Austrian citizenship. This was only a gesture on Otto's part, something he did "for purely practical reasons" and never agreed with; he stated, ""This was such an infamy, I'd rather never have signed it. They demanded that I abstain from politics. I would not have dreamed of complying. Once you have tasted the opium of politics, you never get rid of it." Many progressives in the country were wary of allowing Otto back in - it was not until 1966 that Otto was finally issued his Austrian passport.

From 1966 until the death of his wife in 2007, he worked tirelessly in European politics. He went into seclusion after the death of his wife Princess Regina in 2007.
I was blessed to have the opportunity to meet Otto von Hapsburg in October of 2003 when he came to visit the students of the International Theological Institute in Gaming, Austria. He was robust and energetic, surprisingly so for someone who at that time had just turned 91. He gave a short speech on European politics and the (then) escalating conflict in Iraq. I got a chance to address him personally during the question and answer session and asked him his opinion on the role of John Paul II on the fall of Communism. He replied that he believed John Paul II was absolutely instrumental in the collapse of Communism in Europe and that the media did not understand the cultural role the Church, and the Pope, played in this struggle.

Some other anecdotes from other students' questions:
A lifelong Catholic and believer in the vision of Europe united under Catholic monarchy, Otto will be sorely missed by all faithful Catholics. Sadly, his passing in Europe seems to have barely been noticed. Here is a photo of his coffin laying in state at the chapel of Poecking on Lake Starnberg in Bavaria. Notice the number of persons in attendance: 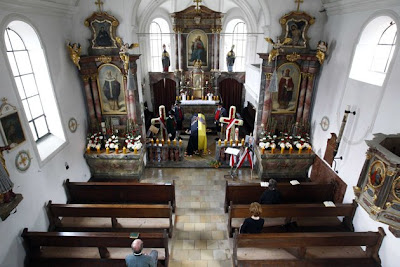 Good God, I had no idea. This is really momentous.

God bless him and his family!

Wow, and you remember all those points from his talk! Great memory. I remembered how he knew quite a few languages, but I'd forgotten. It was a good talk, though.

You weren't there with me were you? I see on your profile that you are from Canada - are you the Bob (or "Robert") that I am thinking of???