Priestless parishes as a fait accompli? 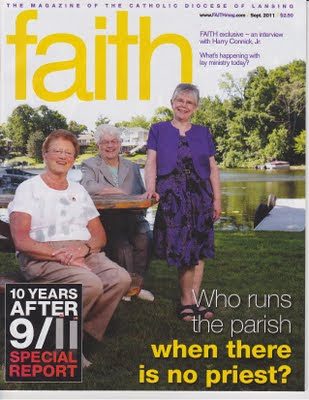 In our diocese, every Catholic household receives a monthly, complimentary copy of the diocesan publication FAITH magazine. Unfortunately, this fruit salad of a magazine has let me down month after month, year after year for a decade. This magazine is pure syrup.
Although I am always frustrated whenever I read the kind of fluffy shortcake that this magazine is chock full of, I was especially irritated by the cover of the most recent issue, which you can see above. Three old women with short hair (two of them wearing pants, and who happen to be nuns) with the headline, "Who runs the parish when there is no priest?" They might as well have said, "Take a good look at your future, diocese, because here it is!" That is the message that is being conveyed here.

Two thoughts. One. Yes, I know there are priestless parishes. But why highlight them and draw attention to them? By drawing attention to them, it's like they are trying to familiarize us with the idea, perhaps so we are more used to it? Perhaps for the purpose of saying, "Get a good look at the future." If there is a problem with a shortage of priests, then why not use the diocesan publication to promote the priesthood? How about an article about the life of a priest, or an autobiographical piece from a priest about how he discerned his vocation?
Second problem: The way in which many dioceses are accepting the concept of priestless parishes as a fait accompli. The battle is being lost before it is even being waged. We do not have a lack of priests because there are no vocations; we have a lack of priests because nobody is really bothering trying to call them out. Our institutional leaders at the diocesan level have by and large bought into the lie that priestless parishes are simply the future of the Church; rather than try to rectify the fabricated "vocations crisis" they are accepting it as a fact. If we are in a battle, they are already dictating the terms of their own surrender rather than planning strategies for victory.

This is what the cover of this magazine seems to convey. Priestless parishes are the way of the future - here's what they look like, so get used to it. The resources behind this magazine could have been allocated to something much more conducive to positive formation. The biggest tragedy about this magazine is what it could be; as it stands, however, the nutritional value of this magazine is on par with styrofoam.

Related article: Communion Straw Men
Posted by Boniface at 9:41 AM

My diocese is doing the same thing. "Oh, woe is us. We don't have enough priests. We'll just have to make more 'parish life coordinators' to fill in for the lack of priests."

All the energy of planning is going into "replacing" priests with lay leadership. Little energy on the diocesan level is going to promoting vocations, with the exception of an over-worked vocation director who is doing good work, but is limited due to his schedule as a parish priest.

I've been telling people to expect a day when there are 10 priests to serve our 94,000 square mile diocese. I hope I'm wrong! Please, Heavenly Father, let me be wrong!

I don't want to invite calamity, but I find it funny that for all the comments about how the Church is "run by a bunch of old celibate men", the vast majority of the people who want to take positions of power in parishes (especially those without regular priests) are old celibate women.

Wanting power is vastly different than feeling you are called to do something by an ordained structure set in place by God.

Even that argument aside, the problem with these parishes (I live in one - not in that diocese though) is that older celibate women have no clue as to how to integrate the core of our Christian culture: the family. There is no understanding of what role the youth can or should play. There is no understanding of the needs, spiritually, of the family.

I know these are broad brushes, but I have seen this many times, in many places. It isn't that women want to run the parishes - it is that men want nothing to do with what they find in the parishes.

I think Joseph hit on something - that they don't know how to get in touch with the youth. In Texas, they are having life-teen Masses Sunday evening, which is a disaster - when I went once, the church wasn't overflowing with youth (quite the opposite).
We're not drawing in young adults and teens, we're driving them away by treating them like kids, rather than adults; they don't want babyfood anymore.

Everywhere I see women and girls (alterservers) taking over, the men (and boys) step aside. This certainly won't encourage more men to the priesthood.

You have every reason to be alarmed. The liberal apostates want to diminish the priesthood and promote priestless parishes. By doing so, the door, they think, will open to women priests and married priests. There is a plan to all this.

To this end, I must also add the introduction of girl servers has put another nail in the coffin for promoting vocations to the priesthood. Girls move in, boys move out. It becomes seen as something for girls. Who would have thought?

I shall always hold this against JPII for he allowed this aberration into the Church.