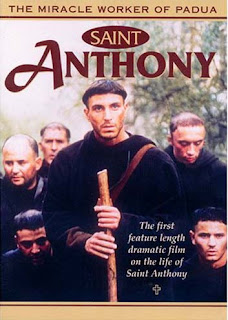 St. Anthony: The Miracle Worker of Padua is one of those films that you always see in the Catholic film catalog and wonder if it is any good. It is always a crap-shoot with some of these Catholic-produced movies. Some are very good productions but still end up being bad movies, like Leonardo de Filippis' Therese. Others are poor productions by American standards but wind up being phenomenal films; the Spanish language Teresa of the Andes and Teresa de Jesus fall into this category. Some, like Patrick, are bad productions and bad movies, while others, like Padre Pio, wind up being all around decent. Then there are those saint films that are secular productions and may be anywhere on the spectrum, from Man for All Seasons (awesome) to Brother Son, Sister Moon (extremely questionable). Some secular saint films, like Becket are actually wonderful. and In short, when you look at these saint films, there is absolutely no way to know what you are getting in to.
Against this backdrop, St. Anthony comes off pretty well. The most famous episodes of Anthony's life are depicted well, the cinematography is excellent and the score is wonderful. The casting is spot on, with one exception, which I shall get to momentarily. There were a couple of tear-jerking moments, especially towards the end, and the whole film did a decent job of being faith-building. The film dwells not so much on Anthony's external ministry as much as his own internal struggles with pride and his desire to find and fulfill God's will. Like Teresa de Jesus, the focus is very introspective, though it is not handled quite as well.
I should also mention that the film is in Italian with English subtitles. To me this is a plus because subtitled movies are usually better than English language films, but if subtitles aren't your thing, then this movie isn't for you.
The big weakness in St. Anthony; The Miracle Worker of Padua is the same weakness shared by many other feature length films on saints: it spends way too much time developing how Anthony became a saint, focusing on his struggles in his pre-conversion life and his spiritual wandering to the point that by the time Anthony becomes sure of his mission and really starts to look "saintly", the film is practically over. Thus, we end up sitting down to watch a movie about Anthony the Saint but end up getting one about Anthony the worldly knight, Anthony the misguided, would-be Augustinian monk, Anthony the doubtful Franciscan full of inner turmoil but never really get to know Anthony the Saint. By the time the Saint does show up, it is so brief and rushed as to feel somewhat artificial and unbelievable. We have witnessed him struggling with pride, confusion and self-doubt for 75% of the film so that the miracles crammed in to the remaining 25% feel somewhat unrealistic.
This is a problem in many of these saint films; another one that comes to mind is Leonardo de Filippis' Therese, which dwells so exclusively on Therese going into the convent and her early life that, by the time we get to the Little Way, it seems just a footnote in the life of a character who does not come off as saintly at all. Perhaps the directors are trying to make the saints seem more "human"  by depicting these sorts of things in depth. But the fact is, when we watch a saint movie, we do not want to see the saints acting like us and dealing with petty troubles like we do; we want to see them acting saintly; i.e., transformed and transfigured by Christ's grace to be signs of God's presence in an unbelieving world. Paradoxically, in order to make the film believable, the saints should be depicted in a somewhat other-worldly (unbelievable) manner.
I mentioned one huge misstep in casting: while the actor who plays Anthony is perfect, and his side-kick Giulietto is likewise a great pick, the actor cast for the pivotal role of St. Francis of Assisi was terrible. The character is not central to the plot - he only shows up three times, I believe. But the presence of Francis is so important to the development of Anthony, both in the film and in real life, that the poor choice in casting this character is a definite detriment.
What is so bad about him? Well, without getting into too much detail, let's just say he looks and acts like Russell Crowe, which is about the last actor I would ever cast as Francis. Granted, St. Anthony depicts Francis in his older years, but what we have here is not the emaciated, half-blind yet joyful character from Bonaventure's biography, but rather a well groomed, rotund, and gruff character who seems almost too serious to be taken seriously as the Poverello. For all its other problems, at least Brother Son, Sister Moon did a great job in its casting for this part. Too bad St. Anthony missed out on this  important role.
All in all, this movie is decent. It is faith building, fairly historically accurate, and has good acting and cinematography. Like I said, though, it dwells too much on Anthony's struggles and not enough on his saintliness.  I give it two tiaras.

The Beckett movie from 1964 is an awesome movie. Excommunication scene is so powerfull :D

It would be nice if sometime you did a list of the best catholic movies on saints. I am so fed up with utter failures distributed by Ignatius Press that not only are bad movies but don't accurately portray the Saint in any way.

Perhaps I look for something different in saints movies.

I, myself, like to see how they struggled to overcome their problems to get to sainthood. I struggle so much with my own problems, that I find this useful to see the saints struggle on their way to sanctity. I don't much care for saints that don't seem like real people.

But perhaps it would be useful to see more of what they did once they become saints. Just don't make them so saintly that they don't seem they were ever real people with struggles as well.

Perhaps you just shouldn't care for movies about saints and be content with the books written by or about them by other saintly authors.