Cardinal Meisner on the Identity of the Priest 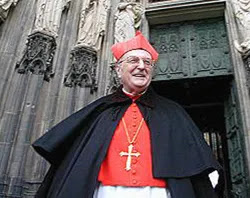 As we prepare to embark upon the journey of Lent, it is fitting to reflect on the importance of the sacrament of penance, especially in its relation to the role of the priest and the "ministry of reconciliation" that God has entrusted to His faithful priests. Below are some excerpts from a talk given by Cardinal Joachim Meisner, Archbishop of Cologne, Germany, from a talk entitled "Conversion and Mission" that was given at the conclusion of the 2010 "Year of the Priest." The Cardinal speaks about the necessity of frequenting and offering confession as intimately bound up with the identity of the priest and says that priests who do not offer confession (or go to it themselves) are not mature enough to be priests:
"One of the most tragic failings that the Church has suffered in the second half of the twentieth century is to have neglected the gift of the Holy Spirit in the sacrament of penance. In us priests, this has caused a tremendous loss of spiritual profile. When the Christian faithful ask me, "How can we help our priests?" I always reply, "Go to them to confess." When the priest is no longer a confessor, he becomes a social worker of a religious kind. In fact, he lacks experience of the greatest pastoral achievement, of working together so that a sinner, thanks also to his help, leaves the confessional newly sanctified. In the confessional, the priest can penetrate into the hearts of many people and, from that, encouragement and inspiration may result for his own following of Christ.

Therefore, it is not sufficient in our pastoral work just to want to make corrections to the structures of the Church, to make it appear more attractive. It is not enough! What is needed is a conversion of heart, of my heart. Only a converted Paul could change the world, not an expert in "ecclesial engineering." The priest, with his being assimilated to the form of the life of Jesus, is so inhabited by Him that Jesus becomes perceptible by others in the priest.

The biggest obstacle preventing Christ being seen through us is sin. It prevents the presence of the Lord in our lives and for that reason nothing is more necessary to us than conversion - also for the purposes of the mission. It is a matter, in short, of the sacrament of penance. A priest who does not frequently take his place on one and the other side of the grille of the confessional suffers permanent harm to his soul and his mission. Here certainly lies one of the major causes of the manifold crisis in which the priesthood has come to find itself in the last fifty years. The very special grace of the priesthood is precisely that the priest can feel "at home" on both sides of the grille of the confessional: as penitent and as minister of forgiveness. When the priest distances himself from the confessional, he enters into a grave identity crisis. The sacrament of penance is the privileged locus for the deepening of the identity of the priest, who is called upon to make himself and believers return to draw upon the fullness of Christ.

If there were nor sinners, who need forgiveness more than daily bread, we could not precisely know the depth of the Divine Heart. The Lord points it out explicitly, "I tell you, there will be more rejoicing in heaven over one sinner repenting than over ninety-nine upright people who have no need of repentance" (Luke 15:7). Why ever- we ask ourselves once again - does a sacrament that stirs such great joy in heaven evoke such antipathy on earth? The reason is our pride, the constant tendency of our heart to fence itself in, to be sufficient unto itself, to isolate itself, to close in on itself.

For this reason, the spiritual maturity to receive priestly ordination by a candidate for the priesthood, in my opinion, becomes evident from the fact that he regularly receives - at least as often as once a month - the sacrament of penance. Indeed, in the sacrament of penance, I meet the merciful Father with the most precious gifts He has to give, namely the "giving," the forgiving and the giving of grace to us. But when someone, precisely because of his rare attendance at confession, says in fact to the Father, "Keep Your precious gifts for Yourself! I don't need You or Your gifts!" then he stops being a child, because he excludes himself from the fatherhood of God, because he does not want to receive His precious gifts. And if one is no longer a child of the heavenly Father, then he cannot become a priest, because a priest is, first and foremost, the son of the Father through baptism, and then, through priestly ordination is, along with Christ, son with the Son."
From the Miles Christi newsletter, #136, Feb, 2012
www.mileschristi.org
Posted by Boniface at 10:01 PM

Wonderful! I have heard good things about Cardinal Meisner. I am happy to see that there are some points of light in the darkness of the episcopate in the German speaking lands.

i was in the american catholic military community in berlin when cardinal meisner was bishop of berlin. many good things i could say. he was rejected by the american military church, but it was so liberal. i gave cardinal meisner a statue of jacinta of fatima. it was made of tough material. when this bishop of berlin crossed the berlin wall the communists searched his car and smashed jacinta's shoulder. now i pray he be converted agin to the old latin Mass. this year is his 50th anniversary to the priesthood.