The Eschatology of the Wedding Feast of Cana 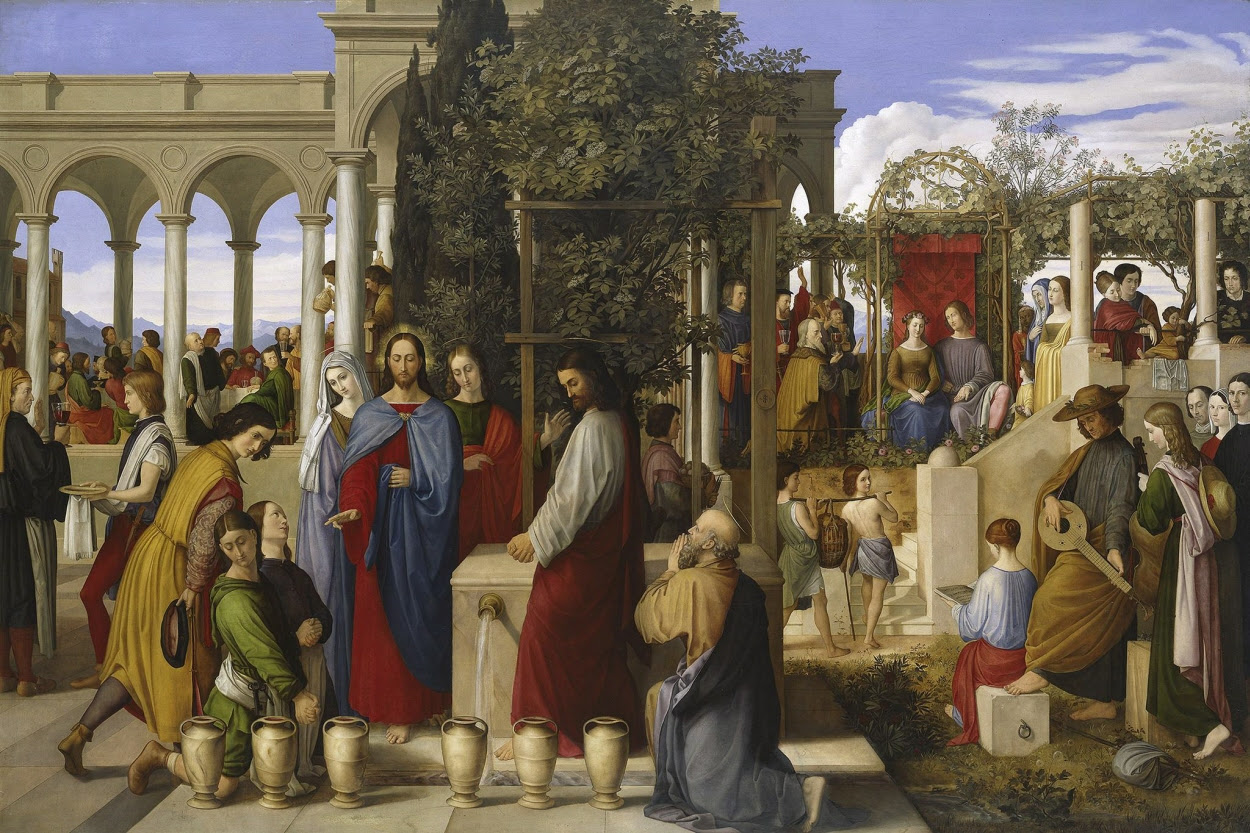 This weekend at Mass the Gospel reading narrated the wedding feast at Cana, at which our Lord performs His first miracle at the behest of our Lady by turning water into wine.

Traditionally, this Gospel story has been the occasion of homilies on the intercessory power of our Lady, or as a proof for our Lord's divinity, or sometimes on a Eucharistic meditation (since our Lord changes the substance of one thing into another as He does in the Eucharist). These are all beautiful and valid interpretations of this episode. But this week, when reading and re-reading this passage in preparation for Mass, a possible eschatological interpretation of the miracle jumped out at me that I'd like to share.

In the first place, the number of water jugs caught my attention. According to the Gospel, there were six large jugs used for the purposes of ritual purification. In Scripture, numbers are very symbolic, and there is a rich tradition of biblical numerology that interpreters from the Middle Ages on back to the pre-Christian Jewish scribes employed when looking at the Bible. Eight, for example, is the number of new creation and Resurrection; forty days or forty years denotes a period of testing; twelve symbolizes fullness, as epitomized in the twelve tribes of Israel and the twelve Apostles; seven is the number of divine perfection, etc.


So let us say the six water jugs represent the created order. But what are the jugs filled with? Of course, they are filled with water, as stated above. Water also has a connection with the created order for, as the Fathers of the Church point out whenever they discuss creation, water was the primal element of Creation, mentioned in Genesis 1 even before the creation of light: "In the beginning God created the heavens and the earth. Now the earth was formless and empty, darkness was over the surface of the deep, and the Spirit of God was hovering over the waters." Life arose first from the waters, the firmament was first established to divide the "waters above" from "the waters below" (Gen. 1:7), and dry land first appeared out of the water. Water is the primal element from which creation emerged. This point is made clearly in the Scriptures and is also noted in the writings of St. Basil and St. Gregory of Nyssa on the Creation.

Six jugs symbolizing the six days of creation filled with water, the constituent element of creation. We have here in these six jugs a type of the natural world - the world as it currently exists. But this type of the world is about to come into contact with the Lord of Creation.

Note also the occasion of this miracle: a wedding feast. To my knowledge, this is the only wedding feast described in the New Testament other than the eschatological "wedding feast of the lamb" described in Revelation 19, described by St. Thomas Aquinas as "the banquet where you, with Your Son and holy Spirit, are true and perfect light, total fulfillment, everlasting joy, gladness without end, and perfect happiness to your saints." Given that the eschatological marriage supper of the Lamb and the wedding at Cana are the only two weddings mentioned in the New Testament, is it a stretch to suggest that perhaps the former prefigures the latter?

I do not know exactly the order of which the events of the age to come will go down; but we do know that there will be a transfiguration or transformation of the existing order of creation. The world will not only be renewed, but the very nature of the universe will be changed, glorified and transfigured. St. Paul speaks of this transfiguration of creation in Romans 8:

"For I reckon that the sufferings of this time are not worthy to be compared with the glory to come, that shall be revealed in us. For the expectation of the creature waiteth for the revelation of the sons of God. For the creature was made subject to vanity, not willingly, but by reason of him that made it subject, in hope: Because the creature also itself shall be delivered from the servitude of corruption, into the liberty of the glory of the children of God. For we know that every creature groaneth and travaileth in pain, even till now. And not only it, but ourselves also, who have the firstfruits of the Spirit, even we ourselves groan within ourselves, waiting for the adoption of the sons of God, the redemption of our body (Rom. 8:19-26).

Our bodies will be Resurrected and glorified, even as was the Body of Christ; but this is not all, for as the head of the creation, our glorification will signal the glorification and transfiguration of the entire cosmos, which as St. Paul said, is "groaning and travailing in pain" waiting for the Resurrection of the body. This transfiguration of the universe is what Isaiah looks forward to as a "new heavens and a new earth" (Isa. 65, Rev. 21).

A change in the order of things. A glorification and exaltation of nature in such an utterly transformative way that we cannot possibly imagine it - and this in the context of the inauguration of the "marriage feast of the Lamb."

But here in John 2, at the wedding feast of Cana, we have a marriage supper in which the Lamb is present. And what does the Lamb do? He is presented with six jars of water, which He transforms into wine. If the wedding feast symbolizes the wedding banquet of the Lamb, and the six jars and the water represent the created order, then does not this transformation of water into wine by Christ bear some semblance to the transfiguration of the whole created order by the Lamb at the end of time? Just as Christ will at that time glorify and transfigure creation, so does He here transfigure and glorify the water by turning it into wine. It remains liquid, it remains drink, but it is exalted to a higher state; it is nature perfected and exalted by grace. This miracle is performed not just on any object, but by water, the symbol of creation, in six jars, the number of creation. And it is done at a marriage feast, calling to mind the glorious transformation of man and the universe that our Lord will effect at that glorious marriage feast in the age to come.

Therefore, I think we can add an eschatological dimension to the wedding feast of Cana episode. Scripture is rich and has many levels of meaning, and no matter how long we have read it or how much we think we know, there is always something new that can grab our attention.

I was read a sermon in Customary of Our Lady of Walsingham, in which some saint or other interpreted Cana as a symbol of the incarnation (water becoming wine; man becoming divine). This supplements your interpretation nicely.