Retreading History Toward the Heavenly Jerusalem 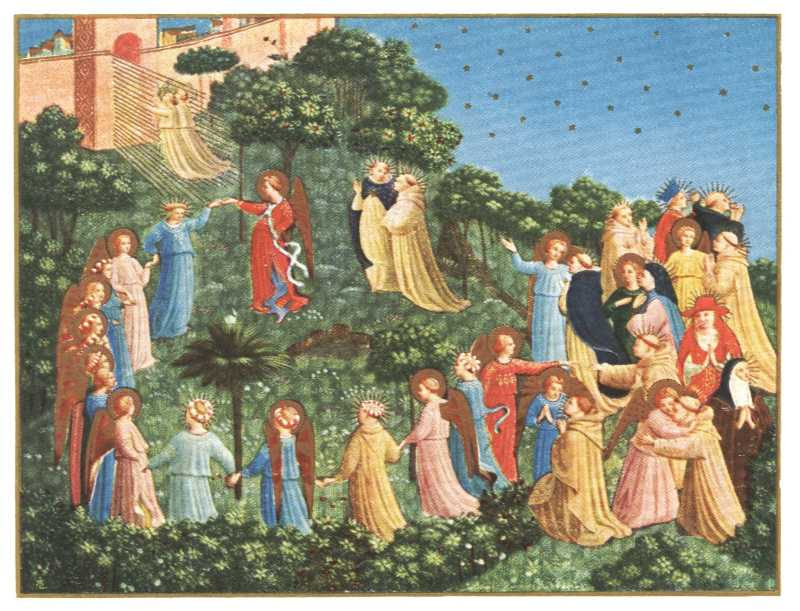 I have a theory about Church history. It is only my private theory, so I will grudge no person who ventures to disagree with me about it. The theory is this: knowing how salvation history has unfolded from the beginning of the world till the coming of Christ - ripe with shadows, types, antitypes, fulfillments and prophecy, symbolism and acts that, while not repetitions, bear strong resemblances to one another - that as we approach the end of time and the Second Coming of our Lord, the history of the Church will in a way repeat itself backward as we approach the terminal moment of Christ's return.

The Christian era begins and ends with a coming of Christ. Within those brackets, we have the physical persecution of a small but pure Church, the growth of the Church as an institution, the origin of the hermits, the blossoming of the monastic orders, the conversion of Europe, the ascendancy of the Church as a political power, the beautiful unfolding of unified Christian civilization in medieval Europe with its own distinctive art, architecture and philosophy. Then, with the Reformation, things start to go backward, and the Church seems to go through these same phases again, only this time backward, losing what was gained and in reverse order to how they were attained, but in doing so, returning to a smaller, purer state more reminiscent of the early Church; the Church has gone from small, formative to large, institutional, but since the Revolt has been shedding some of the temporal power and clout it once enjoyed and is moving back towards a small, formative society: and just as this smaller Church immediately followed the First Advent, so its reappearance - not as a global entity with billions of lukewarm Catholics - but as a small, faithful Remnant, will also precede His Second Advent.

Before we go on, please do me some credit and don't presume that I am implying the "small, formative" and "large, institutional" aspects are opposed to one another; I am not coming at this as a Hegelian but as a historian, simply noting that the Church has gone through these stages without passing judgment on them or speculating on their compatibility or lack thereof. Nor am I approaching this as a Joachimite, positing a conflict between an "age of the Church" with an "age of the Spirit." I note merely that the Church is a living thing, and as all living things, has a time of growth and development. I also think that, as a metahistorical reality, there is some symbolism or rationality to the way it has changed and how it will change in the future, and that the future is related to the past.

The first thing lost after the Protestant Revolt was the uniquely Catholic culture that was the product of the Catholic Church, that unity of culture across all Christian peoples that was called "Christendom." This culture was lost and fragmented as nation-states replaced Christendom.

If we are moving backward from the large to the small, the next thing we can expect to see is a new blossoming of monastic life, just as the original monastic flowering preceded the conversion of the west. I think we are in this stage right now; old religious orders are dying and small but extremely faithful orders, congregations and societies are popping up all over the place. You and I all know that vocations are thriving wherever tradition is the standard. There is no vocations crisis; there is an identity crisis. The shift we are seeing is one from quantitative to qualitative; in the next generation,we may see numbers of religious among the traditional orders decline in number, but we will also see, overlayed as it were, the explosive growth of newer, smaller orders whose quality is outstanding.

Following this, probably when I am an old man and going into the 22nd century, I believe we will see a rebirth of the eremetic movement. Eremetic movements grow when there is a lazy, contented urban Church that is incapable of satisfying the desires of the zealous and penitent soul. I foresee a time when, like in the age of the Desert Fathers, men and women will again take to the wilderness, but this time it will not be the deserts of Egypt - it will be the medians and freeway off-ramps outside our major cities, or remote Appalachian mountain tops, or in inhospitable, stony retreats in the American desert. These new hermits will stand a living condemnation of the greed and materialism of the current age and in their bodies will manifest the reality and power of Christ. Who knows how long this will last.

With their resurgence, I believe, we will return to an age of more widespread, public and undeniable miracles, miracles that will convict and convince the honest few while further alienating the apathetic majority.

If we are going backwards in time, the next thing that happens, or actually at the same time, is a renewal of violent persecution, in which the Church, even though small and harrowed politically and ostracized socially, gives a spectacular public witness, attested by many martyrdoms and accompanying miracles, and like the preaching of the early Church and martyrs, these martyrs will vocally warn the world to repent because the coming of Christ is at hand. This period will also be the period of the antichrist, a new Nero or something similar.

Then, going backwards, we get to Pentecost, the birth of the Church with the manifestation of great power exercised by Christ's apostles, and likewise in these latter days the Church will exercise great power in the Spirit in the days immediately preceding Christ's return, when "his feet shall stand in that day upon the mount of Olives, which is over against Jerusalem toward the east: and the mount of Olives shall be divided in the midst thereof to the east, and to the west with a very great opening, and half of the mountain shall be separated to the north, and half thereof to the south." (Zech. 14:4).

Note that, if we take the metaphor to its logical conclusion, the very first act of God on earth is the creation of the universe, and the very last act God will do in salvation history is the destruction of the current order and its reconstitution in glory.

I know this theory does not adequately take into account various other things commonly associated with the End Times, which are of varying degrees of authority (two witnesses, conversion of Jews, false prophet, age of peace, days of darkness, etc), but knowing how history has worked out in the past, I would not be surprised if it did somehow work out this way - as if the march of the ages is like a Yo-Yo that is unfurled to a certain point along a certain trajectory, and then when it has reached that point, at a certain time known by God, it begins to be unfurled, developments are undone, things repeat themselves in a certain manner, and we finally find ourselves in the same situation our early Catholic ancestors were, except whereas they bore witness in the age immediately after Christ's departure, we shall do so in an age immediately prior to His glorious return.

Just something I have been ruminating on, perhaps taking as my locus of though the saying of Mark Twain that "History does not repeat, but it does rhyme."
Posted by Boniface at 3:24 PM

I have heard a similar theory that overlaps and takes into account the conversion of the Jews. I forget which Doctor or Pope was quoted to support this, but it says that before the Jews come back to the Church, the Gentile nations will gradually return to the paganism from which they came. Of course we can see this in action right now, with Western nations showing widespread practices of Wicca and other forms of neo-paganism, as well as the cultured secularism of classical pagan groups like the Stoics.

The return of Enoch and Elias at the very end of time could be a throwback to the pre-Christian age, as the Christian age almost entirely unravels. They are both witnesses from ancient eras, Enoch even from the antediluvian age, both bearing witness to Christ in the face of this paganism which boasts of its pre-Christian pedigree.

I'm unsure how the age of peace would fit in. I assume you are referring to the prophecies of Fatima? That could simply be a holding pattern in the unraveling of Christendom, without necessarily a return to a Catholic society. I believe a halt to war is all that was promised.

Well, I mentioned the age of peace in the context of various end time events, which I mentioned are of different levels of authority. I am not sure I believe in an 'Era of Peace' in the manner that some (i.e., Father Ianuzzi) assert.