Jesus' words at the meeting with Caiaphas 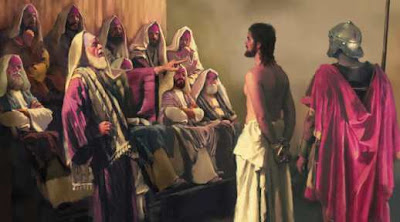 A month ago, I did a post on the website on contradictions in the Bible (here) which scrutinized the so-called "inconsistencies" in the Bible that are constantly put forward by skeptics as proof that the Bible is not inspired. Thanks be to God, this post has been viewed more than any other article I have ever written and I have received several notes of thanks from individuals seeking to convert their atheist friends as well as from Christians wavering in their face under the withering assault of the new atheists who found my rebuttal to the claims of the skeptics vivifying to their faith.

I am currently putting together part 2 in this series, looking at another alleged 65 contradictions in the New Testament. The thing that strikes me as I go through these is that the vast majority of the "inconsistencies" simply are the result of ignorance and unwillingness to do a little digging. As an example of the sorts of things that are being thrown out there as 'contradictions', look at these two verses from the trial of Jesus, in which Christ's response to Caiaphaas in John is juztaposed with his response in the synoptics and an alleged contradiction is asserted:

The difference in wording here no doubt has do with the fact that Matthew wrote his Gospel in Aramaic and preserved Aramaic idioms while Mark wrote in Greek for a Gentile audience and reported the exact meaning of Jesus' idiomatic phrase rather than the wording. Let's look at this for a moment.

What Jesus said in response to the question of the high priest was an Aramaic idiomatic expression that is commonly translated as "You have said it!" Modern translators have had a hard time with this phrase (almost every translation renders it differently), as idioms are steeped in the context of a particular culture and don't always translate well, especially over millennia. Idioms are the hardest thing to translate, because they introduce a dilemma or reproducing either the exact wording or the meaning, but usually not both.

For example, suppose you ask me how I like your cooking, respond with the common American idiom, "It's the cat's ass!", meaning, "I like it a lot." How would we meaningfully translate "It's the cat's ass" into another language while accurately conveying the meaning? If we translate it as "I like it a lot", then we lose the idiom. If we translate it word for word, the meaning will be lost in cultures who do not use that particular idiom.

Furthermore, what would people 2,000 years from now assume when they read that someone referred to a dinner as "the cat's ass"? If there was no knowledge of English idioms, one could actually get the opposite meaning from the phrase (i.e., that I thought the food was so horrid that I referred to it as feline anus).

We have the same problem here. Matthew, who did his Gospel in Aramaic, uses the actual Aramaic idiom, which translates as "You say so" or "You have said it," which is similar to the English response "You got it!" or "You said it!", and ultimately means, "Yes." St. Mark, as the secretary of St. Peter, was writing for a Gentile audience who would have no knowledge of the Hebrew idiom. He thus translates this difficult idiom as "I am", which preserves the actual meaning of Jesus' words in a way the Gentile audience could understand.

That's just a taste of the sort of things I'm working through. Please say a prayer for all those whose faith is troubled or shaken by these sorts of spurious, ignorant argument.
Posted by Boniface at 8:32 AM

What else is coming down the pike? Will the sspx be backed into a schismatic corner? Is this good pope, bad pope tactics?
Stayed tuned.