Let us buy in Anathoth 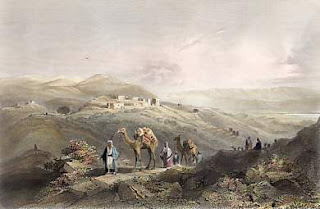 Then they took Jeremiah and cast him into the dungeon of Malachiah the kings' son, which was in the entry of the prison: and they let down Jeremiah by ropes into the dungeon, wherein there was no water, but mire. And Jeremiah sunk into the mire." (Jer, 38:4-6)

The leadership in Jerusalem were upset by the Prophet's words and, with the blessings of King Zedekiah, cast him into a cistern. But what was it about the words of Jeremiah that were so upsetting to the officials of Jerusalem? There are several reasons why the message of the Prophet upset them.

First, the princes and political leadership of Judea had invested themselves into a certain political vision, in which the safety and prosperity of Jerusalem would be safeguarded not by reliance of God alone, but by political alliances with other kingdoms. The leadership of Judah had rejected their special station as a people called of God in exchange for a lesser calling, that of a people wanting to be "like the nations", and of trusting in the nations to deliver them; one could say they wanted to "open up" to the world, and therein sought their salvation. The prophecies of Jeremiah condemned this policy, a policy the elites had spent a whole generation building up. Thus the condemnations fell upon them as a personal reproach. The manner in which the leadership had poured themselves into this failed vision blinded them to the truth which Jeremiah preached.

Second, the leaders thought Jeremiah's critique destructive of the morals of the people; one might say the judgments of the Prophet were counter-productive, or even giving aid to enemy, since they "weakened the hands of the men of war." Judah was at war with Babylon. Why then does the Prophet spend his words railing against the sins of Judah and its leaders? Is not Babylon the enemy? Is not Nebuchadnezzar the real threat? In saying that Jeremiah seeks the evil of Jerusalem, they in effect accuse him of being divisive, of sowing discord within the city. Can not we put aside this in-fighting and focus on the real enemy? When we point fingers at one another, we actually aid those enemies who want to destroy us! By constantly focusing on our own difficulties, we risk being too condemnatory and destroying our morale. We can imagine the princes of Judah saying such things.

Even so, they were in error, for their fundamental mistake was viewing the critiques mentioned by Jeremiah and the military threat posed by Nebuchadnezzar as two distinct, unrelated issues. The immorality and infidelity of the Judean leadership was an 'internal' problem, the Babylonian threat an 'external' one; but Jeremiah had the wisdom from God to see that the external threat only existed because of the internal problem; the fidelity of God's people is always related to the external judgments that may or may not fall upon them. Jeremiah knew the principle that St. Peter would later preach: "It is time for judgment to begin at the household of God" (1 Pet. 4:17). Jeremiah understood that whatever political expediencies Zedekiah resorted to, whatever sorts of dialogue with foreign princes he tried to engage in, whatever remedies were sought, they would all ultimately fail so long as the true problem - infidelity to God - remained unresolved. Jeremiah was not being a traitor by preaching against the sins of his leaders even as the city was being surrounded; on the contrary, he was making known to them their one path of salvation.

Finally, we could note that, even if some of the leaders were disposed to agree with the substances of Jeremiah's criticisms, they found it much harder to turn the ship around and change course at that late hour than to make the necessary reforms to avert God's wrath. The further one goes down a road, the further one commits to a certain vision or policy, the more difficult it is to turn back, and the more profound must be the penitence to effect that change in direction. Thus, Judah reached a place where reform had become not only inconvenient, but very difficult if not impossible from a pragmatic standpoint. Therefore Jeremiah's criticisms and prophecies of doom were that much more odious because the leadership knew it was too late. There was no way out but the trial of fire.

And of course the trial came. Jeremiah was vindicated, and the Word of the Lord established. Jerusalem was taken, the city and temple burned, and princes of Judah taken captive or slain, and King Zedekiah, who had allowed Jeremiah to be cast into the cistern, had his eyes gouged out, a fitting symbol of the spiritual blindness that had brought such a judgment. The people of Judah were taken into captivity.

But for God's people, the last word can never be one of despair. For those who trust in the Lord, even life's worst misfortunes are always characterized by a lively hope. Despite preaching the doom of the city and the impending slavery of his people, Jeremiah did an unlikely thing. Shortly before the fall of Jerusalem, Jeremiah went out and purchased a field in Anathoth (Jer. 32). What was the reason for this unlikely gesture? If you had infallible knowledge from God that your whole nation was about to be destroyed and taken into captivity, what is the point of making a real estate investment?

But Jeremiah realized that the purchase of the field was a sign from God ("then I knew that this was the word of the Lord", v.8). He purchased the field in Anathoth because he knew that despite God's judgments, the Israelites were still God's people, and He would ultimately bring them out of captivity. In the words of the Prophet Hosea, "He has torn, that He may heal us; He has stricken, and He will bind us up" (Hos. 6:1). God's judgment is remedial, medicinal - ultimately, for the purification of Judah. Jeremiah knew that the Jews would return from captivity someday, that the judgments would only be temporary. Hence he demonstrated his faith in the promise of God to bring the Jews back to their land by purchasing a field. He was in effect saying, "I know that we will be back someday, for God hath sworn it", and he demonstrated it by making a land investment.

And what application does this have to us in our own day? There are many things we could ruminate on relating to the attitude of the leaders of Judah and many of our own leaders today, between the blatant blindness of the king and his ministers to the problems of the kingdom and their direct correlation to the crisis engulfing Judah, and similar circumstances in our own age. These parallels should be self-evident.

But rather than dwell on these, let us reflect on this: despite the fact that God judges His people, do we have faith enough in His guidance of the Church to purchase our own field in Anathoth? Is our confidence in His goodness that lively? To buy a field in Anathoth may mean different things to different people, but the point is that our faith must be firm enough that it translates to concrete acts of faith and hope, even if our circumstances seem so bad that we feel like we are in the bottom of a cistern, "sunk into the mire." Even so, we must have confidence that God will restore; "He has torn, that He may heal us; He has stricken, and He will bind us up. After two days He will revive us; on the third day He will raise us up, that we may live before Him" (Hos. 6:1-2). Therefore, let us also buy in Anathoth. Christ is still on the throne. It is in Anathoth that I will plant my seed, even if I do not live to eat the fruit thereof.
Posted by Boniface at 8:11 PM

What a great reflection.

How do you pronounce Anathoth, though?