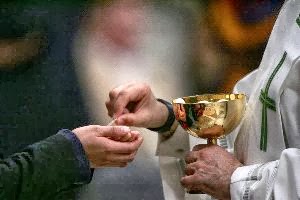 There are many spiritual dangers that abound in the world today. Indeed there are so many that at times it feels like one is walking through a mine-field. Perhaps this is an appropriate image to use; after all, the Church Militant is engaged in a real war "against principalities and power, against the rulers of the world of this darkness, against the spirits of wickedness in the high places" (Eph. 6:12). In this war there can be no neutrality, no compromise, no quarter given and none received. Falsehoods must be destroyed by the light of truth, and sin by the power of holiness. There is no other way, and our eternal salvation is on the line.

Therefore, we can rest easy, correct? Since Peter's successors will never fail, and since the Church will never teach error, we have no reason for concern about any of the troubling news coming from various quarters of the Church today, right? Everything we see going on around us is just par for the course, isn't it?


My friends, if we think so, we gravely delude ourselves. Yes, dangers abound. But these -isms are not the primary danger. The Church is guaranteed that she will never be ultimately teach these errors as truth. The real danger is not that the Church will teach error as truth, but rather, that the Church will tolerate error and allow deviations from Catholic discipline because it feels like it can't stop them anyway. Thus, the teaching will remain "on the books", so to speak, but like obsolete laws in many American states that ban drinking on Sundays but have not been enforced for decades, the teaching of the Church will remain a dead letter while aberrations and dissent will be accepted as the norm.


This is especially relevant to the Church's moral teaching. We can already see this line of reasoning rearing its head. It is not hard to find.  It can be found anywhere you hear a bishop or theologian saying that, while Church teaching has not changed, "pastoral applications in concrete situations", may have to be devised to "deal with" current realities. That is the code phrase - pastoral applications in concrete situations. What this means in practice is that people who find Catholic moral teaching too difficult for modernity will be given a pass on their behavior in the name of being pastoral, i.e., keeping them showing up to Mass on Sunday. It has the benefit of being able to leave doctrinal element intact, but destroy its application through appeal to "actual circumstances". Let us examine three examples:


(1) Homosexual Relationships: We have already seen plenty of examples of this. Without changing or denying Church teaching, some have stated that active homosexuals should be welcomed in the Catholic Church and even encouraged to participate in parish ministries. The Church does not approve of their sinful lifestyle, but nobody should ever act as if this is the case. This is seen to be an appropriate "pastoral response" to the "actual circumstance" or homosexual couples seeking to get engaged in parish life without renouncing their sin. Thus, the formal condemnation of such behavior is rendered meaningless by a refusal to act as if this condemnation means anything practically. We call to mind for our readers the example of Cardinal Schoenborn, who in 2012 overruled one of his parish priests and permitted a man in an active homosexual "domestic partnership" to serve on parish council.


(2) Divorce and Remarried Reception of Communion: The Church's position on the intrinsic impossibility of divorce and consequent sinfulness of any putative "remarriage" is well known. Because a putative "remarriage" is nothing other than adultery, those living in such unions are in an objectively sinful state and cannot receive Holy Communion. However, given the very, very large number of Catholics living in this state, it means many Catholics are barred from receiving Holy Communion. This may cause them to become "discouraged" and "leave the Church" (nevermind that a person who persists in a state of objective sin has already left the Church in their heart). Therefore, to keep them at least showing up to Mass, pastors should grant exceptions to this rule when "particular circumstances" demand it. Consider the teaching of Prof. Paul Zulehner, theologian and professor emeritus for Pastoral Theology at the University of Vienna. In an opinion published in 2010, he stated, "In principle the church bars divorced and remarried Catholics from the reception of communion, but in concrete situations it can and should act pastorally, like a caring head of a household." He then went on to cite a pastoral letter of the Austrian bishops, which states, "“According to the traditional practice of the church, they cannot participate in the full sacramental life, except when there are special circumstances that in each individual case will need to be clarified further in a conversation with an experienced priest.” So, "in principle" nothing has changed, but in actuality, anyone who can claim "special circumstances" in "concrete situations" may convince the priest to "act pastorally" by giving them Holy Communion despite Church teaching!


(3) Cohabiting Catholics: This is so common as to not need much comment. Catholics who are cohabiting are seldom challenged from the pulpit. Catholics who are cohabiting and present themselves for marriage are given a pass, if the priest even bothers to inquire about their living arrangements. With Bishops pressuring parish priests about falling "numbers" of weddings and baptisms performed, many priests are fearful of causing a problem in the Diocese and choose to look the other way and marry cohabiting couples rather than risk causing a breach which may lead them to marry in a Protestant Church or before a judge. Thus, while the official teaching has not changed, the Church's condemnation of cohabitation comes to mean absolutely nothing in the practical sense.

In each of these three situations, we see some common threads:

(1) Prioritizing keeping these people physically coming to Mass at all costs, based on an unhealthy focus on the "numbers" of people attending Mass and receiving sacraments.

(2) A disassociation of doctrine from the practical moral consequents that necessarily flow from that doctrine.

(3) A misguided notion of bringing order to the Church by means simply approving abuses; legalizing or at least sanctioning illegal acts "restores order."

The Bishops of the State of Kansas addressed this division between doctrine and practice in a 1998 letter on the subject of cohabitation, in which they stated that, if cohabitation was in fact morally wrong, that parish priests were obliged to actually act as if this were the case. They summarize the problem of the current approach appropriately:

"How can the priest preach the word of God and uphold the church's teaching on chastity and premarital sex with any integrity while at the same time allowing an unmarried couple to live together as if there is nothing morally wrong with that arrangement?" (Letter of Kansas Bishops on Cohabitation)

Actions are a manifestation of attitude. We cannot maintain that something remains morally wrong while refusing to confront it. To do so is to act "as if there is nothing morally wrong", and results in a practical nullification of the teaching. If something is wrong, we must not only profess it to be wrong in principle, but act as if it were wrong "in concrete circumstances." The same document goes on to correct misguided notions of "compassion" by reminding priests of the unity of compassion with truth, of pastoral principles with dogmatic principles

"Some priests sincerely feel they are acting out of compassion for the cohabiting couple, knowing how difficult it might be to challenge them to live apart. Compromising the full truth of the Bible, however, is really a disservice because Jesus teaches that the truth will set us free no matter how difficult the sacrifice may be."

Unfortunately, when it comes down to the nitty-gritty, even this document ends up waffling on the issue in the end. When addressing what a priest should do if he asks a cohabiting couple in marriage preparation to separate:

"If the answer to the question asked above is "No, we choose to not separate before marriage," then further considerations must be made. If the couple has shown that they are living together for the reason of convenience or financial benefit, and the engaged couple is planning a formal marriage, then the priest will explore with the couple on a deeper level the meaning of the sacrament in the marital bond and the commitment to permanence and stability."

It is unfortunate that the document does not simply say, "If they refuse to separate, then they cannot be married in the Church."

Boniface, you're spot on.

I think this is the best way forward: to state the truth as simply as possible without even mentioning the heresies, misdirections and general bosh coming from... well, Rome.

"The Church is guaranteed that she will never be ultimately teach these errors as truth." This could be an important sentence. It may need editing.