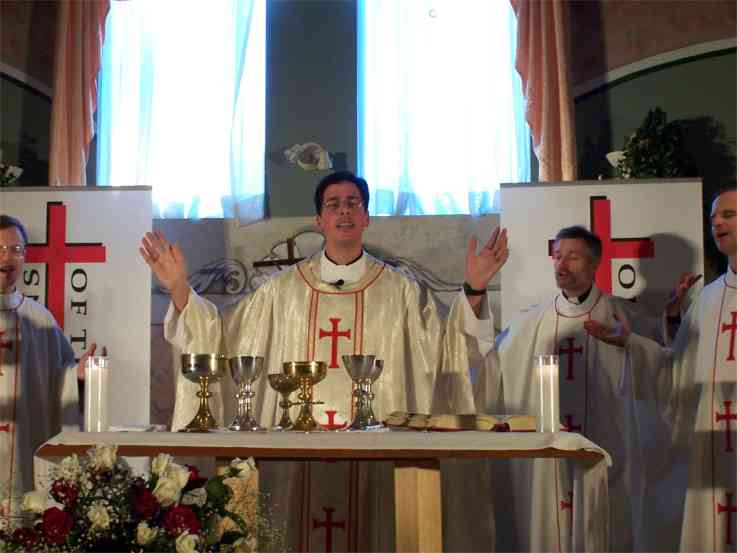 One of the biggest shams that has been foisted on the Catholic people in the wake of Vatican II has been the errant philosophy of antiquarianism, also called archaeologism. Archaeologism fundamentally denies the living nature of the Church, placing greater value on traditions that came earlier chronologically and rejecting those which came later as unnecessary "accretions." Pius XII, in Mediator Dei, wrote that:

"The Church is without question a living organism, and as an organism, in respect of the sacred liturgy also, she grows, matures, develops, adapts and accommodates herself to temporal needs and circumstances, provided only that the integrity of her doctrine be safeguarded. This notwithstanding, the temerity and daring of those who introduce novel liturgical practices, or call for the revival of obsolete rites out of harmony with prevailing laws and rubrics, deserve severe reproof." (Mediator Dei, 59)

Some time ago, we published a lengthy article addressing the dangers of archaeologism on the Unam Sanctam Catholicam website ("What is Archaeologism?"). In response to this article, a reader of the website - and a new conver - sent me the following inquiry:


Just read your article on Vatican II and antiquarianism. If this is the case and antiquitarianism is bad, then does that mean that the OF is not a valid Mass? I am a recent convert and am still sort of confused by this.

It has always been the position of this blog that the Ordinary Form of the Mass (the "Mass of Paul VI" or the "Novus Ordo") is a legitimate, valid Mass. That being said, it is undeniable that the Novus Ordo Mass was certainly influenced by antiquarian ideas. This is especially seen in the push for "simplification" of the rites that we see advocated in Sacrosanctum Concilium chapter 50:

"The rite of the Mass is to be revised in such a way that the intrinsic nature and purpose of its several parts, as also the connection between them, may be more clearly manifested, and that devout and active participation by the faithful may be more easily achieved. For this purpose the rites are to be simplified, due care being taken to preserve their substance; elements which, with the passage of time, came to be duplicated, or were added with but little advantage, are now to be discarded; other elements which have suffered injury through accidents of history are now to be restored to the vigor which they had in the days of the holy Fathers, as may seem useful or necessary."

When the Novus Ordo was promulgated in 1969, we saw, for example, the reduction of the amount of times the Sign of the Cross was used, the elimination of the Last Gospel, prayers at the foot of the altar, etc. This elimination of rites stems from a view of the organic developments of the liturgy as accretions that are of "little advantage" to the faithful - like barnacles on a ship. A further evidence of the trend towards antiquarianism was the positive predilection for "ancient" prayers and disciplines in the reforms following the Council. For example, the promulgation of Eucharistic Prayer #2, which was supposed to be based on an ancient Jewish table blessing. In fact, the historicity of this prayer is questionable (see here).

This is an example of how many of the things introduced after Vatican II that were supposed to be "restorations" of ancient practices were nothing other than modern interpretations of ancient practices. The modern catechumenate and RCIA process were predicated on ancient practices, as were communion in the hand, the permanent diaconate, and the national episcopal conferences, but in each case the modern application was entirely different than the ancient prototypes upon which they were allegedly based. Archbishop Athanasius Schneider of Kazakhstan has written an excellent book on this phenomenon and how it relates to communion in the hand in his book Dominus Est: It is the Lord. So that there was a proclivity towards archaeologist interpretations of history in the Vatican II era is undeniable.

That being said, the fact that archaeologism influenced some of those working at Vatican II does not invalidate the New Mass. The influence of archaeologism in the minds of some of the Fathers who drafted the Novus Ordo does not mean that heretical elements per se have been introduced into the liturgy. This is because archaeologism, though extremely damaging, is not a heresy properly understood, but is more of a flawed approach to history - a fallacious historiographical trend within Catholic thinking. The fallacious thinking has led to the very disorders which Pius XII predicted, but here we are dealing with problems on a "macro" level - philosophical approaches to history, assumptions we bring to the study of liturgical tradition, and so on. The validity of a particular liturgy, on the other hand, is something usually considered on the "micro" level - what are the particular words being used in the rite, what is the form of the sacrament, is the minister doing what the Church intends to be done, etc. None of these particularities are effected by the fact that some of the Vatican II fathers harbored archaeologist assumptions.

That is not to say that validity is all that matters; I have frequently argued on here that to view a Mass simply in terms of whether or not it is valid is horrendously reductionist. The validity of Holy Communion is not the only consideration.

So, please do not mistake me as saying that the prevalence of archaeologist thinking at Vatican II is not problematic; it certainly is. But I would not say that this renders the Ordinary Form Mass invalid. A historiographical-philosophical assumption cannot invalidate the Mass, even if it is a damaging historical approach. If anything, it is simply an argument why the Extraordinary Form is more consonant with Catholic Tradition.

Thank you for helping me out and answering my question Boniface!

That sword cuts both ways. It is antiquarian in Pius XII's sense to reject the new Mass just because it is more recent in time than the traditional Mass. The tradition is living. When Paul VI promulgated the new rites they became part of the Church's patrimony. An analogy is bread taken at Mass, which is brought to the altar and removed from ordinary use.

The mere fact that the past was dug into does not make something antiquarian in Pius XII's sense. Otherwise, he would have been contradicting himself when he presented the restored Holy Week rites which dug into the vaults, simplified things, etc. basically the same pattern as the new Mass. Antiquarianism is that something is intrinsically of more value because it is older. That is where some traditionalists get in trouble. The tradition rites and the newer rites are of equal intrinsic value. All come from God and have His seal of authority. While we can debate about formulations, translations, and such like, to regard the traditional Mas as intrinsically of more value than the new Mass based on it being "traditional" (= ancient > antique), then we have become what we criticize.

This is incorrect. In the sense Pius XII uses it, antiquarianism is that something is intrinsically of more value because it comes from the patristic era.

That depends on what you mean by "intrinsic." Fr. Ripperger has made a very good argument that the old Mass is more meritorious than the new because the ex opere operantis graces available through the rite are greater.