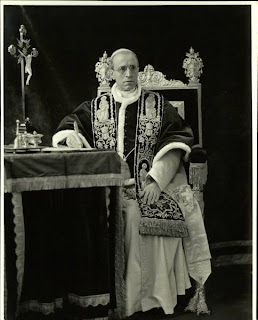 The following story is being reported in the AP and the Times of Israel regarding comments made by Pope Francis on the possible beatification of Pope Pius XII.

ABOARD THE PAPAL PLANE (AP) — Pope Francis remained firm in his refusal to allow the beatification of Pope Pius XII, the World War II-era pope accused by some Jews of not speaking out enough against the Holocaust, because he doesn’t have enough miracles in his record

As he flew from Ben-Gurion International Airport Monday night at the conclusion of two day visit to Israel, Francis spoke of his position on the matter and made it clear that, for the time being, the beatification won’t go ahead.

"There’s still no miracle,” he said. “If there are no miracles, it can’t go forward. It’s blocked there.”

We are refraining from offering any editorial commentary at this point, except to note the point of fact that there has been a reported miracle, as detailed here.

Here is the original story from the Times of Israel.

Kudos to Amateur Brain Surgeon for the tip.
Posted by Boniface at 9:06 AM

Woops./..I added a kudos to you for the lead.

Has God sent a prophet? www.thewarningsecondcoming.com
Be sure to read about the “Seal of the Living God” found on the homepage links - *a Biblical reference to this topic: Rev. chapter 7

You mean that clown Maria Divine Mercy? That anonymous middle-aged Irish woman whose getting rich on these prophecies? What a joke. I mean what a laughable joke. MDM is so absurd it makes Bayside look totally credible.

Didn't they skip a miracle or two for St. John XXIII?

That having been said, the quality of the miracles have also been taking a hit as of late, along with all of the Canonization process.

That's exactly the point. The pope can "skip" miracles if he wants. Thus, when he comes back and says he "can't do anything" for Pius XII without a miracle when he did the same for John XXIII, well, it looks like the canonization process is being politicized.