The Beauty of the Catholic Homeschool Mother 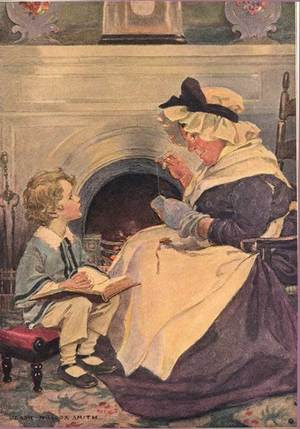 Recently, I attended the Southern California Catholic Home Educators Conference at St John the Baptist Church in Costa Mesa as a vendor for Alleluia Audiobooks.  I was there with a dual purpose, to hand out free Catholic audiobooks and to educate myself a bit on homeschooling as my oldest daughter will be starting kindergarten next year.

What still brings me joy when I recall the conference is this: I had never seen so many modestly dressed women in one place at a single setting (even Mass).  I have lived in Southern California my entire life, and needless to say the standards for dress, especially when it gets warmer, aim more towards revealing than concealing.

Not so among these faithful. I had the joy of interacting with many mothers who came by the booth who could not be accused of any of the following: bitter, weird, frumpy, socially awkward, unkempt, or angry. Rather, they were full of joy, modesty, kindness, and a general manner of behaving that could best be characterized as graceful.

If you think about it, the life of a Catholic homeschool mother is one of exceptional modesty.  The vocation of motherhood (which is held out today with much contempt) is lived in the fullest manner: the personal supervision of the entire upbringing of a child without major delegation to another adult. To make the choice to homeschool one's children (and in a faithful Catholic way) will not win human respect among the majority of society, but rather a lot of ridicule.  Outside of close family and friends, the main work of this endeavor will go without praise (sometimes even within the family).  Children, who must be trained in the ways of virtue and learn wisdom through time, will oftentimes not show gratitude for the extent of the sacrifices that their mother and father make for them.

However, what should stand out to all, even if they do not have children or who never plan to homeschool: this work is done without payment and oftentimes at great sacrifice and expense. This fact, in my opinion, is one of the great indicators of the purity of heart that  homeschooling mothers practice. Perhaps you are saying "no duh!". But consider that many apostolates never get off the ground because of an unwillingness of those who do the labor to actually sacrifice the personal cash to make it successful. There is a book I have on ancient monastic writings from Ukraine that was recently translated from ancient Slavonic into English, most people probably do not know that the book even exists let alone some of the wisdom within its pages, but its copyright notification is so strict at the beginning of the book that I cannot even provide a direct citation (outside of a book review) without violating it.  I am certain you can think of other apostolates which either stifle themselves or have failed because of money.

Despite there being no economic incentive (other than viewing it as a cheaper alternative to private school) there are plenty of pitfalls that one can fall into that could damage purity of heart.  Many a monastery in history has shown how men vowed even unto poverty can fall into greed; we should not think that homeschooling children will preserve a family from worldly ambitions, delusions of grandeur, or the inordinate love of scholarships and high test scores.  However, the later opulence of some monasteries was not so easily found in the early days of monastic life where one needed to be sustained by a great religious fervor in order to persevere through the hard living.  One could get the feeling, with the absolute destruction of the Catholic education system by the modernists, that we are returning to the primitive rule, per se, of Catholic education.  St John Climacus and St Teresa of Avila both preferred monastic systems of a few monks to one elder over both solitary life and huge monasteries (though they acknowledged that each had their own distinct merits).  The intimacy for home life presents unique circumstances for the rooting out of vice and the development of virtue through correction that is more difficult when overseeing many students, or parents being separated from their children for long periods of time.

There are some who have characterized the Catholic subculture as bitter, weird, cranky, and mediocre,   whose "scene" is overflowing with overly sentimental blogs and tacky Catholic memorabilia. What I saw at the Homeschooling Conference was the opposite, and I believe that the Catholic homeschooling subculture is and will continue to yield those great fruits of hope and charity. Kitschy JPII mugs and 3D Divine Mercy images  will pass away, but the fruit of homeschooling will yield great results that are eternal.

Posted by Noah Moerbeek at 8:46 AM

"Kitschy 3D Divine Mercy images" - where can I get one?!

Could you delete or not approve the comment I made about my failed homeschooling and marriage ? Thank you.

People need to know that humility and fear or God are necessary in a homeschooling mother for the project to succeed and lead the children to heaven (the real goal). But all the world do not need to know my personal story. Thank you and keep up your good work !

Homeschooling is a tool to a desired end - godly and educated children. Like any other tool, its goodness depends on the dispositions with which one approaches it and for what ends it is used. Clearly in your case your wife's dispositions are not good, and so this tool has become corrupted.

I am not at all surprised at the allegation that indeed, it is possible that folks who make tremendous sacrifices and persevere, end up showing signs of sanctity.

In the modern parlance: "Go Figure!"

Clearly, the Catholic Church, even in Her laity, still has quite a bit of fight.

Thank you for all of your work. I am a reader of this great website. I didn't know how else to get this message through, so I'm just commenting on this post, hope you don't mind.

I have done some digging for the origins of that Pius XII quote on the left side of your website. It seems like it might not be legit, as much as I wish it were.

Here's a link. One person left a comment with a citation and some info that might be worth double-checking.
http://bellarmineforum.org/2013/06/21/did-cardinal-pacelli-pius-xii-really-say-this/

Not endorsing that website, just using it b/c someone on it found the citation.