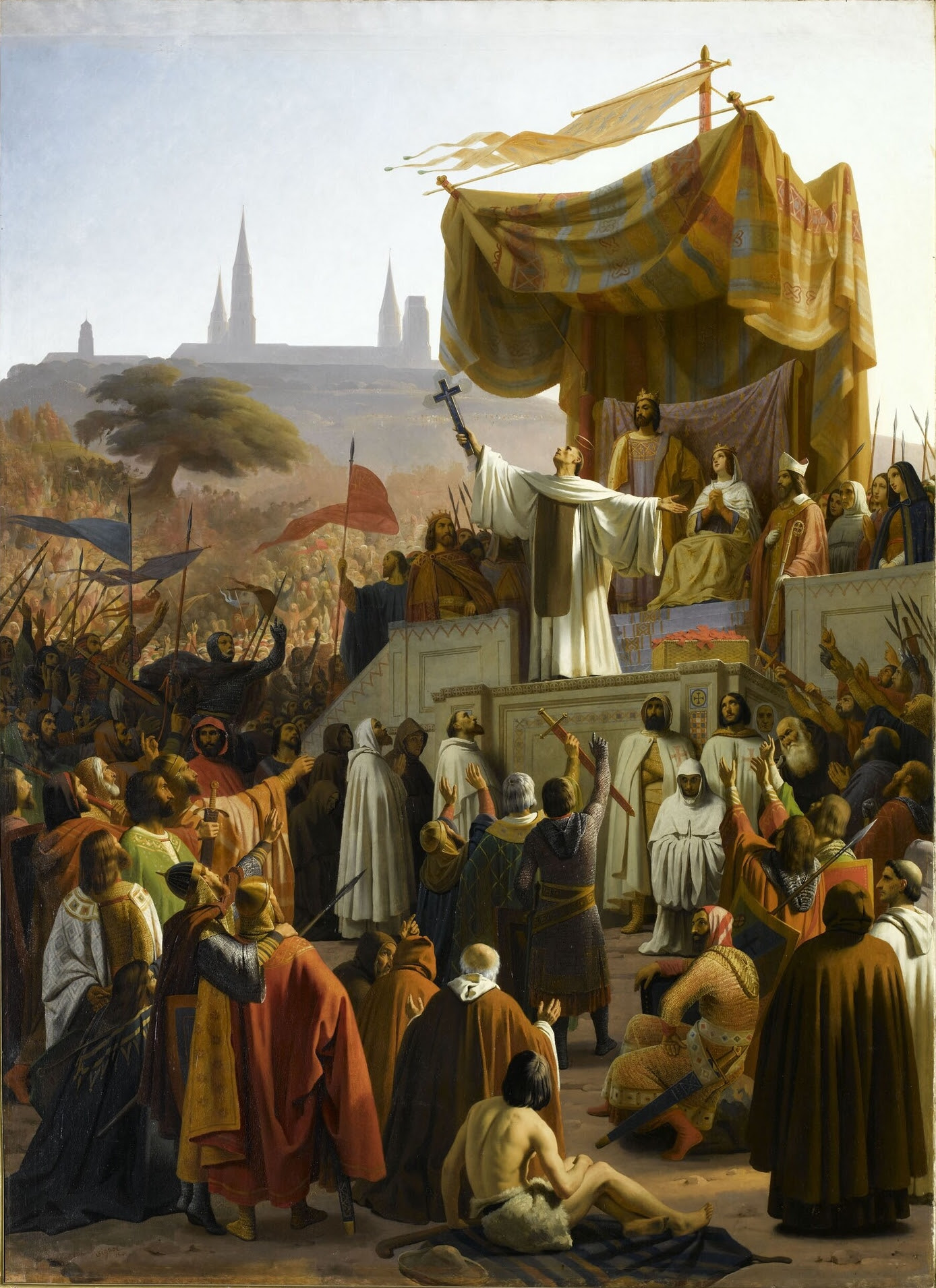 It is easy to sit in the comfort of modern society and cast harsh judgements on our forefathers that have come before us.  Not very long ago a somewhat popular priest in pop culture thought he had the right to cast judgement and declare that the holy St Bernard's preaching of the crusades was wrong.  I wish the example was only limited to that but, there are countless examples going back decades of the error of pacifism creeping its unwelcome tentacles into the Church.  Diabolic Utopian sentiments are flung carelessly from our highest pulpits demanding a world without war, a world without violence.

It was not always so though, there was a time where the Church defended her sheep with steel instead of empty platitudes and fuzzy feelings.  What do you think God is more pleased with?

Lets look at what happened during the preaching of the 2nd crusade by St Bernard:

“In every place on his journey and wrought the most astonishing and instantaneous cures : the blind recovered their sight ; to the deaf and dumb hearing and speech were restored ; the paralytic received the use of their limbs; the possessed, the lunatic, and the demoniac were delivered from the spirits which tormented them. But the greatest of his miracles was the conversion of hardened hearts and the penances to which public sinners submitted.” excerpt from St Bernard the Wonderworker - Free Catholic Audiobook

Every hear of a miracle during the preaching of pacifism? I didn’t think so, because there is not one.  I am almost sure of it, because if there was it surely would be shoved down our throat endlessly.

Yet, we know that the 2nd crusade did not end well.  Haha, our pop culture preacher might say, this is proof that it was not of God.  The facts say otherwise.

"On that on that very day, when the news came of the destruction of the Christian army, God wrought a miracle at the intercession of Saint Bernard. “It came to pass, however, that when the lamentable tidings of the destruction of the Crusaders resounded through France, a father brought his blind boy to the servant of God, to have sight restored to him, and, by many prayers, prevailed on the saint who declined. The saint, placing his hand on the child, prayed to our Lord that He would be pleased to make known, by restoring sight to the child, whether the preaching of the Crusade was from Him, and whether His spirit was with himself. While, after praying, he was waiting its effects, the child said, what am I to do? For I see! Then a great shout was raised by those who were present ; for many were present, not of the monks only, but of people living in the world, who, when they perceived that the boy saw, were greatly comforted, and gave thanks to God.” excerpt from St Bernard the Wonderworker - Free Catholic Audiobook

There is more in the Audiobook even about mystical visions confirming the validity of the crusade as well, be sure to check it out. Despite our forefathers courage in battle against our foe, they at least sent missionaries to convert the Mohammedans;  many of whom were martyred preaching Christ Crucified with bravery.

Yet, with the passing of time all falsehoods are revealed.  The absolute savage persecutions of the Christians in Iraq has once again shown us the true face of historical and authentic Mohammedanism, not some made up religion of peace which perverts Islam's doctrines (how culturally insensitive!).   I hope Catholic intellectuals will find themselves blushing for shame for their past dismissals of Islamic terror as being  "a valid protest against pluralist secularization and materialism."

Intellectuals, and professors wearing fuzzy sweaters coming together will not stop war.  Slashing defense budgets and removing standing armies will not end wars.  Treaties, even good ones will never end war.  War is one of the four horsemen of the apocalypse, sent to afflict mankind when we reject the Gospel.

God made the Jews fight their enemies after they left Egypt!  Our sweet savior Jesus Christ ordered his apostles to own a sword, even if they had to sell their cloak!  Our God allowed the angels to fight a war in heaven! Our God is a God of War! There will always be war on earth, until the end of the world!

Consequently, today (August 11) is the day to begin a Novena to St Bernard of Clairvaux (you can find one here) for his feast day.  He persuaded many nobles and Kings to embrace the crusade, perhaps we can pray that he does the same from heaven to our leaders, that they might bring some military relief for the Christians of Iraq.

SN This article does not attempt to take a position on the origin of the ISIS, the Iraq and Afghanistan wars, St. JPII opinions on those wars etc.  It does advocate for  military relief (US or otherwise) for the Christians in Iraq today, it is the opinion of the author  not necessarily the other contributors of Unam Sanctam.
Posted by Noah Moerbeek at 2:09 AM


I feel so afflicted. Do you?

FWIW, I agree with your post in it's entirety.

My comment is that there are no longer any Catholic (Christian) Kings in Europe. Europe is ennervated. Where will the steel come from? Who will send the next Dong Juan or Sobieski? Where will their armies come from? It may be that we too will find ourselves in similar dire straights. But, we longer have the Christian armies.

but muh turn the other cheek

You are grossly misinterpreting the Christian tradition on just war if you think that "turn the other cheek" means to infer that Christians are bound and committed to pacifism in every situation.

We will cross that road when we get there. Whether God performs another conversion like he did with Constantine, he raises up a peasant army like he did with Saint John of Capistrano, or we have to face our death with courage and receive our crowns as Martyrs I do not know.

I know the best way to prepare for it is to live a life of grace and virtue and pray to persevere in the Faith in all circumstances.

Speaking of martyrdom, if you were to fight back against a Muslim forcing your apostasy, "going down swinging" so to speak, would you still be counted as a martyr? Or do you have to passively accept the sword across the throat? I hope the question remains academic.

Martyrdom seems to imply a sort of passiveness...although I don't know if this question has ever been addressed directly, but there are two corollary pieces of evidence that would suggest one could not be a martyr "going down" fighting:

In the early Church, Christians were strongly admonished not to seek out martyrdom, not to turn themselves in, but to be ready to accept it if it came to them. This would seem to suggest that "true" martyrdom must be something that is passively accepted, not sought out or engaged in.

Second, in the late 1st millennium, in the Byzantine Empire, some Emperor wanted to get soldiers declared martyrs if they died in battle with the Muslims. However, after examining the question, a group of orthodox theologians opined that there was no precedent for Christians being declared martyrs for dying in battle. As far as I know this was in the 10th century, before the schism.

Of course, neither of these address the issue you brought up of a Christian being asked to apostasize first. But they seem to be evidence against the theory you are proposing because they both point to the "passive" nature of martyrdom.

By being a catholic Christian does not mean I have to die at the hands of my godless and utterly inhuman religiously justified killers. Always and at all times
self-defense or just-war I think is never outlawed or an issue of being illegal or immoral, self preservation is always the first human natural moral law, Christian faith does not proscribe nor doctrinally abolish it.