Dissolution of the Medieval World 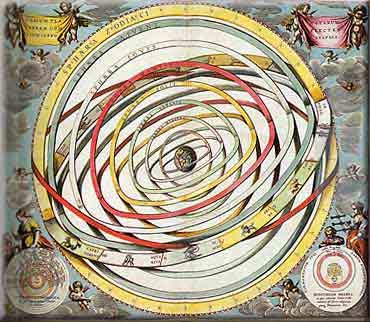 No human era tried so hard to find a place for everything within a single system as did the Middle Ages. It was an age of synthesis, when the most contradictions were only apparent, when it was believed that centrifugal forces in society could be held together, when it was assumed that the world was a single, gigantic system in which everything from the highest angel to the most fragmentary piece of prime matter had its place in God's great cosmos. No culture ever worked as diligently to reconcile the One and Many as the medievals.

And what sort of divergent forces did the medievals manage to reconcile? In my opinion, I believe the medieval synthesis consisted in three fundamental harmonies: Faith and Reason, Church and State, Spirit and Flesh. The medieval synthesis consisted in being able to maintain a harmonious balance between these three sets of contraries, reconciling them all in God's goodness. So long as this great balance was maintained, medieval life flourished.

These three great syntheses gave rise to multiple other syntheses that flowed from them: mercy and justice, hierarchy and equality, localism and universality, collective and individual, law and custom, town and country, poverty and wealth, will and grace, private good and public good, position and humility. We could go on and on. Of course medieval society was far from perfect; but at least the medievals believed these things could all be reconciled with one another.

But do you want to know why the Middle Ages broke down? It was not the rise of the nation state. It was not the Black Death. It was not the printing press or even the Protestant Revolution. What, then, caused the dissolution of the medieval world?

Quite frankly, people got tired. We particularly value the medieval synthesis - but maintaining that kind of synthesis is difficult. It means a constant vigilance - avoiding extremes of defects and excess, maintaining a delicate balance between divergent forces, persisting in a careful study of problems to ensure that both poles in the harmony were maintained. And the medieval world got tired of it.

People began to want Church or State, Faith or Reason, Spirit or Flesh. They revolted against the diligence required to maintain these hard-won harmonies and wanted to abdicate that effort in favor of a seemingly "easy" solution to the problems of the sons of men. Was the relationship between Church and State complicated? Then the solution was to terminate the rights of the Church and exalt the State.  Tired of reconciling the place of the Flesh and Spirit, the founders of what would become Puritanism exaggerated the realm of the spirit at the expense of the flesh. The new philosophers, exhausted at the effort required to maintain the unity of Faith and Reason, cast off Faith to worship before Reason alone, while other Protestants, taking Luther's maxims to their conclusion, retreated into a citadel of pure Faith.

Thus the medieval world died because men could no longer bear the effort that was required to maintain the great syntheses. And thus that world and all therein collapsed.

The desire for universality - for synthesis - did not die, however. This desire is passed along through the Catholic sense and is present in anyone who truly loves the Catholic Faith. And as with the medieval world, a fidelity to the Catholic Faith in its fullness requires the same careful, diligent effort necessary to maintain harmony.

And yet, I fear again we are in a time where people do not want to take the effort to maintain the harmony between contrary pressures. And what pressures do I speak of? Between a man and his office, between the Church's human and divine elements; between good and bad among our pastors, wheat and tares, truth and obedience, the spiritual and physical aspects of the Church, precision and ambiguity.

As at the end of the Middle Ages, many Catholics are tired of maintaining these delicate harmonies: to choose blind obedience at the expense of truth, or a bold stand for truth at the expense of obedience. People either confuse the man with the office by making the office into the man, or else they denigrate the man to such a degree that the office itself is held contemptible. I do not want to call anybody out by name or delve into any specific issues; I leave you with this principle to ruminate upon and see to what it is applied.

The harmony of Faith is hard, but it is necessary; it holds all things together. It is nothing else than the place where the Cross comes together. Staying at this center point is really the only option if we do not want the small remnant we have to dissolve as did the medieval world. But the center must hold; the disparate ends of the spectrum must be bound together and maintained in the love and truth of God, "in whom all things hold together" (Col. 1:17). Anything less is a surrender to despair.
Posted by Boniface at 7:26 PM

What happened to methodius' post on the complexities of popes and canonization? I wanted to say thank you to both of you because you helped to clarify some concerns that have plagued me regarding the efficacy of EVERY canonization. You have a new post up and I won't be able to review it until Monday. I'm thinking that it's so ironic that I'm going to a former protestant to get clarity on church doctrine. My mother was fond of saying that converts make the best catholics. Best regards and good night.

I would say that the widespread acceptance of heliocentricism destroyed the sense of harmony. Because of the Galileo incident reason looks like it opposes faith. I think that the Church refuses to condemn evolution because they want to avoid a Galileo incident. This is also why the religion known as psychology is acquiesced to even though it's not really scientific.

Many problems in the modern world stem from discarded anything faith teaches in favor of human reason.

Now that's interesting. I definitely agree with you re: the Church's hesitancy to take on evolution. I think the origins go back way farther, however, to the 13th century and William of Ocham, who destroyed the harmony at the very essence of creation by denying the reality of substance and suggesting what we called substances were mere names (nomen, hence nominalism) and not independent realities. This created a distinction between the world of phenomenon and the world of the real.

I believe this may be the post from Maximus you are referring to?

I would agree with you. Nominalism destroys the very idea of ideal forms and essences. For example, LGBT is a denial of there being an ideal man or an ideal woman. Everyone has to be judged on an individual basis.

Then again, this philosophy may be over my head. I've recently been reading Kreeft's Socratic a Logic, so I may be talking about things I don't fully understand.

It is a great post. Very chestertonian. It was indeed hard work to maintain that harmony between so different aspects of human life. A work worthy of heroes of the political realms, heroes of prayer, heroes of the intellect.
Some commentaries here seem to have missed the point: it is not biology or faith, not astronomy or faith. It is both. For they both stem from the same Root.

Very pertinent piece. It's amazing to think what Christendom could have achieved by now had the wretched
'Enlightenment' never happened. Unfortunately, too many Christians refuse to fight back, and many side with the secular enemy.

Added to my blogroll.

I only had a couple of undergraduate courses in Medieval history so I have a very limited understanding, but I offer this; as the article describes, “Thus the medieval world died because men could no longer bear the effort that was required to maintain the great syntheses.” With that is there one prominent factor that caused the medieval society to push off this syntheses and might it be the sin of usury? The world changed dramatically after Leo X issued his bull in 1515, there is no doubt, so might this be the factor? Certainly one could say that mankind’s view of the material world greatly changed when usury was suddenly no longer a sin.

The tacit acceptance of usury by the Church definitely contributed to the changing of the medieval mind. But what people don't realize often is that the medieval synthesis began to break apart much earlier than the 16th century. It was already in trouble by 1300 and really started coming apart in the late 1300's going into the 1400s.

I agree, and if one considers the amount of supernatural communications many of the mystics and saints had, the 1300 was really the high water mark.