Logo for Year of Mercy 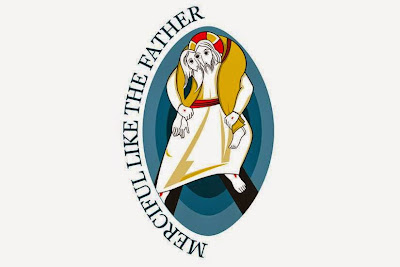 In case you have not yet seen it, the above image is the official logo for the upcoming Year of Mercy. The art is the work of Slovenian Jesuit artist Fr. Marko Rupnik (click on the image for a bigger view if it is too small to see).

Notice that between Christ and the other figure, there are only three eyes, signifying apparently that "Christ sees through the eye of Adam and Adam sees through the eye of Christ." The motto of the Year of Mercy is "Merciful Like the Father", despite the fact that Pope Francis says the purpose of the year is to the demonstrate "the church's maternal solicitude."

Lest you have any doubt that this Year of Mercy will be used as a propaganda tool to push for greater acceptance of deviant lifestyles, Archbishop Reno Fisichella, spokesman for the Year of Mercy, stated that "The motto, 'Merciful Like the Father,' serves as an invitation to follow the merciful example of the Father who asks us not to judge or condemn but to forgive and to give love and forgiveness without measure.”

I offer no new commentary here, but refer you to our article "Children's Crusade and the Age of Mercy" from March 21st, 2015.

All quotes and information from this Catholic Register article.
H/T to Blog for Dallas Area Catholics
Posted by Boniface at 2:15 PM

Take it on the chin said...

My brain snapped up the logo and the flag, and before I could take it in, my mind said: "Don't tell me he's using this ugly thing somewhere."

And I am glad it wasn't you, Boniface. It is much, much worse, but we're used to that.

The image is demonic. Nuff said.

I'm so sick of looking at that ugly horrible picture of Our Lord. PLEASE post something new so I don't have to look at that every day when I check out your blog. Thank you.