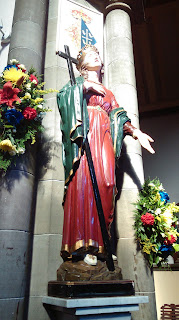 The following is a guest post from a long-time contributor to this blog, although this is the first time he has written anything for us. John Goodall is a Traditional Catholic who lives in the Glasgow region of Scotland. For several years now he has worked behind the scenes lovingly editing all the articles on the Unam Sanctam Catholicam website (because my punctuation and grammar was so bad I required another person to help clean them up). His job is very humble and thankless - and for that reason I am all the more thankful for him.

John has a special love for the saints of Scotland. This June he attended a historic pilgrimage in honor of St. Margaret in Dunfermline, Dunfermline is the biggest city in Fife and retains a special connection to St. Margaret, who wed King Malcolm III here in 1070 and subsequently established an important abbey here. The Dunfermline procession was held annually for centuries until it was discontinued in 1974. This year's procession marks a happy restoration of an ancient practice, although as John will explain, it was not without some unfortunate occurrences. Still, it is a pleasant event in a diocese that is plagued with problems.

Pictures from the pilgrimage can be found below.


On a sunny afternoon on Sunday 28th June, my brother and I went to Dunfermline to a pilgrimage procession organised by the Archdiocese of St Andrews and Edinburgh. Starting at 3pm, the procession was to pass through the centre of Dunfermline to end at St Margaret Memorial Church,
which has a shrine to the saintly queen.

The procession and pilgrimage was the first held in Dunfermline in 41 years. It had taken place in honour of Saint Margaret not long after her relics had been translated to a new shrine after her canonisation and then continued until the Reformation. It was then revived in 1899 and continued until 1974.

When we arrived at the park where the procession was to start, we were both pleasantly surprised at the large number of people there. When I spoke to a few of my friends and fellow parishioners in the line, they said that they too were surprised at the large turnout and we all reckoned there was about 1000 people in it. The clement weather, always an important factor in Scotland, must have helped a great deal. Others in the procession also showed me the literature that had been handed out. A booklet outlined various places in Dunfermline associated with Saint Margaret, such as Dunfermline Abbey, the Tower and Saint Margaret’s Cave.

There seems to be a lack of hymnody to Saint Margaret as the procession was fairly silent apart from the small group of scouts and the bagpipes playing at the front (obligatory for all processions in Scotland, it seems). Hopefully in future there will be a little more singing.

The Mass itself was fairly standard. The Memorial Church which holds the relics of Saint Margaret was absolutely packed, with pilgrims gathering in the hall underneath the church to watch the Mass on television screens. The one thing that disappointed me greatly was the decision to have a woman minister from the local protestant church read the second reading, which I found quite scandalous. On the other hand, the absolute highlight of the whole pilgrimage was the opportunity to venerate the relic of Saint Margaret.

Happily, they plan to carry out the pilgrimage again next year and it is hoped that it will become a regular annual event. It was a beautiful occasion to give thanks to God for Saint Margaret’s intercession and example, and to display good Catholic sentiment and practice in public. May there be more such things throughout Scotland!

Saint Margaret, patroness of Scotland, pray for us! 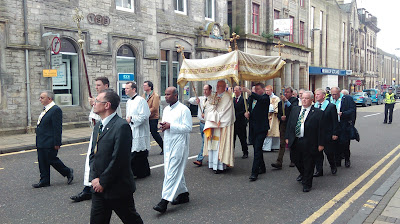 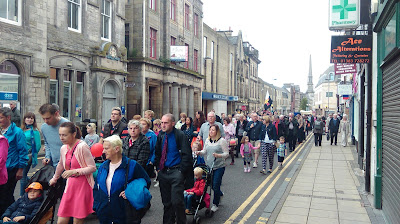 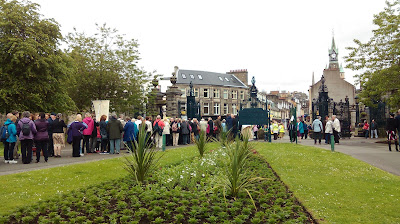 This looks wonderful, wish I could participate in this sort of thing. How terrific it would be that instead of taking cruises in warm places Catholics from all over the world would flock, with their children, to real Catholic events like this. God bless all who promote and participate.
Barbara

Why was this pilgrimage not advertised in every Scots Catholic Church,if so there would have been a greater turnout.It was not advertised in my parish.Before 16th century,thousands throughout Catholic countries and thousands in 20th century from British attended this pilgrimage.So let the Catholic world know about this ancient pilgrimage next year and thereafter.While the Bloggers comments were encouraging,i dont agree with his comments that a Protestant Minister should not participate in the readings.Our country Scotland is recovering from many anti Catholic bigoted years,so in the Spirit of ecumenism ,more so as half my family tree are Presbyterian half Catholic,there was nothing scandalous.Would the Blogger rather we went back to the bigoted years,and ignore St John Paul 11,encouraging words to the Protestants,"Let us walk in this pilgrimage together"

I believe we would rather go back to the years when Protestantism did not exist at all.