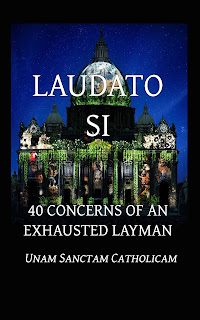 I am not a fast person when it comes to churning out material. I write when I feel like it and take my time, if possible. Hence back in 2015, when there was a whole bunch of hubbub about Pope Francis' environment encyclical Laudato Si, I did not write anything on the matter. I wanted to spend some time digesting the encyclical and formulating my thoughts on it.
On my desk, I have had a copy of Laudato Si sitting out for the past year. I've been studying it whenever I have had time in order to really comprehend what the encyclical. Over that year, I have been working on a synopsis of my thoughts on the encyclical, which I am happy to offer now in the form of an eBook.

The book goes through the encyclical, pretty much paragraph by paragraph, and just goes through little observations I made about various aspects of the pope's thought. Though most of the book is dedicated to concerns I have with the document, I do mention the things I like about it as well. My purpose in writing this was to do beyond the pop-media "synopsis" that we always get about new documents and really dig into the meat, as well as looking at some of the real theological issues in the document and getting away from just discussing climate change - because the real revolutionary passages in this encyclical are not about climate change.

Here is a bit from the introduction:

The encyclical Laudato Si of Pope Francis was released with much fanfare on May 24th, 2015. There has been an abundance of commentary on the encyclical, though pop-Catholic editorials on Laudato Si have, to a large extent, suffered from the deficiency of trying to consider the encyclical very broadly; "summing up" the content of the document in 1500 words or less.

The problem is this cumbersome document does not lend itself easily to summation. It is certainly about "the environment", but from a pedagogical standpoint it has very little structure. It reads more like a disjointed connection of reflections on various environmental themes rather than a single, coherent body of thought. Because of this, each theme needs to be examined independently. Laudato Si has rightly been called a "platypus document", having characteristics of various strains of thought all merged together in a 246 paragraph hodge-podge.

Thus, these meager attempts at "summing up" Laudato Si generally fail to give us an adequate view of the document because they do not delve into the text itself. One commentator who had published an article on the fundamentals of Laudato Si admitted to me privately that she had barely begun reading the document before publishing her apologia of it. If people are objecting to traditionalist critiques of Laudato Si as proceeding from a predetermined and irrational dislike of Francis, is not an apologia published prior to a reading of the encyclical evidence of a predetermined and irrational
defensiveness?

We at at Unam Sanctam Catholicam have endeavored not to fall into this trap. I hitherto have offered no commentary on the encyclical because I hadn't finished reading it. I printed it the day of its publication and spent months patiently reading it, taking notes, and meditating on the implications of each segment. And there are parts of it I like very much. In fact, on my initial reading, I liked it more than I thought I would.

Still, I had some grave concerns. In fact, even though I liked it more than I thought I would, I have to say this was one of the most disappointing ecclesiastical documents I've ever read - on so many levels. With all going on in the Church and world, this is what the Pope thinks is pressing?

The eBook is 41 pages, $5.00 USD. It is available in ePub, Mobi, and PDF. If you are interested you can purchase from this page, or it is also listed on the Cruachan Hill Press website.

Special thanks to Ryan Grant from Mediatrix Press for the cover design and creating the eBook files.