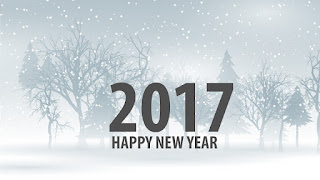 Happy New Year everybody! We have wrapped up another 365 days at Unam Sanctam Catholicam, and my what an interesting year it has been!

It has become cliche to say that 2016 was awful. I didn't find it such at all. For me it was a year of amazing new things and wonderful opportunity. But I was also busier than I have ever been; I was so busy blogging kind of fell by the wayside. I barely published on the sister site all year and my movie reviews lapsed totally.

Part of this was working on some personal projects; I published an excellent little edition of The Life of St. Columba by St. Adomnan. with a new 30 page introduction and an appendix containing all the hymns and prayers attributed to this great saint. I also put out an ebook on Laudato Si, with 40 concise chapters on various questions relating to this encyclical (here is a brief review of the ebook from "Musings of a Pertinacious Papist").

But what kept me most busy was some mainstream writing work that I have been blessed to have obtain recently; 2016 saw the publication of the first volume of my middle school textbook series from TAN, as well as the publication of TAN's Manual on Marian Devotion, which was written in part by the Dominican Sisters of Mary, Mother of the Eucharist but which I edited and compiled most of the citations.


Beside the busyness, I was also relieved to be able to just step back a bit from trying to keep up with the craziness coming out of Rome. I often chime in on current events, but I don't want to be part of the professional 24-7 commentariat who consist entirely of following and commenting on the events in Rome (see "I Give Up", April 22, 2016). Not that there is not a place for that, but I have always valued the freedom to not post if I don't want to or can't, as well as to post on obscure things that are probably outside the pale of current events.

Now...my favorite posts of the year!


Deaconess Commission: Building the Momentum: The push to study women's deacons is dangerous - and not because we might actually get women's deacons.

NCR Firings: Martyrs or Loose Cannons? The NCR firings of Shea and Simcha were not martyrdoms for unpopular political opinions but the responsible termination of loose cannons.

Alien Civilizations: Statistics prove there have been over a trillion alien civilizations? Not so fast.

Miracle at Mont-St. Michel: A short, sweet little story about the Blessed Mother saving a pregnant woman from drowning in the Middle Ages.

The Phantasm of Fiat Continuity: Continuity does not exist merely because someone says it does.


On Avoiding Servile Labor: My thoughts on what is and is not proper on Sundays and Holy Days.

Pope Francis and the Sin of Saul: Pope Francis says the sin of Saul was that he was afraid of novelty. It's more the opposite.

Identity Based Outreach Ministries Blur the Line Between Overcoming Sin and Celebrating It: Ministries catering to "the LGBT community" walk a very thin line.

Doubt and Christian Faith: The relationship between doubt and faith.

Tradition On the Ground: Conservative Catholic naive trust in the power of documents while ignoring what is happening on the ground.

Hello there,
My husband just came across your blog and would like to sign up for email notifications when you have a new post. I can't find a sign up button, am I able to do this please?

Is there a way I can subscribe by email?

I just added a subscribe by email form on the left sidebar. If the sidebar is not showing, click on the title of a post and it will show up.