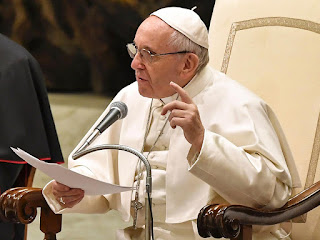 Earlier this month, the Supreme Pontiff Pope Francis gave an interview with the German newspaper Die Zeit, in which he sounded off against the rising tide of populism in western democracies. He said, among other things, that "populism is evil and ends badly, as the past century showed."

I assume that what Francis has in mind when he condemns populism is the populism of the political right, a kind of nationalist populism. One can have varying opinions on this. But what strikes me is that he speaks of populism as if he is totally unaware that he is the world's most eminent populist.

Populism is a very broad idea that can encompass many political movements. But, just going by the Wikipedia definition of the term, populism "proposes that the common people are exploited by a privileged elite, and which seeks to resolve this...Its goal is uniting the uncorrupt and the unsophisticated "little man" against the corrupt dominant elites (usually the established politicians) and their camp of followers (usually the rich and the intellectuals). It is guided by the belief that political and social goals are best achieved by the direct actions of the masses."

Jorge Bergoglio's entire worldview has been forged in the furnace of the populist politics of Latin America. His fundamental approach to problems political and ecclesiastical is populist in its appeal. In July of 2015, he addressed the World Meeting of Popular Movements in Bolivia, where his statements were more saturated with populist rhetoric than anything Donald Trump of Marie Le Pen has ever said. He joined his voice to  "cry of the people", calling for land, lodging and labor for all our brothers and sisters", the "excluded" of Latin America. He separates the world into two classes, the greedy elitist oppressors and the marginalized common man:

All the poor commoners oppressed by "the system"! The global masses locked in a Marxian struggle against the Man in his various incarnations.

The Pope senses a rising surge of popular fury against the world order: "I have sensed an expectation, a longing, a yearning for change, in people throughout the world...people are hoping for a change capable of releasing them from the bondage of individualism and the despondency it spawns." He appeals to the downtrodden to rise up and actualize the change they long for:

You, the lowly, the exploited, the poor and underprivileged, can do, and are doing, a lot. I would even say that the future of humanity is in great measure in your own hands, through your ability to organize and carry out creative alternatives, through your daily efforts to ensure the three “L’s” (labor, lodging, land) and through your proactive participation in the great processes of change on the national, regional and global levels. Don’t lose heart! You are sowers of change.

And lest we conceive of this surge towards change in purely ideological or rational terms, the Pope reminds us that this movement is more akin to a passion or a raw emotion than anything else:

...we are deeply moved…. We are moved because “we have seen and heard” not a cold statistic but the pain of a suffering humanity, our own pain, our own flesh. This is something quite different than abstract theorizing or eloquent indignation. It moves us; it makes us attentive to others in an effort to move forward together. That emotion which turns into community action is not something which can be understood by reason alone: it has a surplus of meaning which only peoples understand, and it gives a special feel to genuine popular movements.

The poor of the world oppressed by corrupt elites. The downtrodden encouraged to rise up and take their destiny into their own hands. The great leader, the pope, urging them on and joining his voices with those of the oppressed. A call to translate the popular emotional anxiety and social angst of the poor into community action. Is this language not dripping with populist rhetoric? And this speech is just one example; these types of statements from Pope Francis are legion.

The point is not whether Pope Francis is correct or not. In much of this, he certainly is. The poor of Latin America are oppressed. There is an elitist global cabal that would like nothing more than the economic enslavement of the downtrodden. That's not the issue. The issue is that Pope Francis' appeal is absolutely, definitively, without a doubt populist in nature.

Pope Francis is fundamentally a populist. It's so intrinsic to his worldview he doesn't even realize it. He recognizes demagoguery and populist appeals in leaders whose agenda is in conflict with his own, but fails to identify populist rhetoric in his own appeals. Steeped in the neo-Marxian populism of Latin America, his brand of Argentine populism does not seem like populism to him - to him it's just, well, it's just the way leaders speak.

Again, this is not a critique of the pope's ideas or his initiatives. But it does demonstrate that his assertion that "populism" is essentially evil is untenable, for he himself is a populist, and populism cannot be "evil" when used by one's opponents but Christlike when done by the pope - and Pope Francis is the world's most prominent populist.

"You can do a lot."
"The future of humanity is in your hands."
"Organize and carry out creative alternatives."
"Participation in the great processes of change."
"You are sowers of change."
"An effort to move forward together."
"Emotion which turns into community action."
"A surplus of meaning which only peoples understand."
"A special feel to popular movements."

This is meaningless. It sounds exactly like self-absorbed promethean neo-pelagianism.

Brilliantly argued and written. I have a feeling were he still the Archbishop of Buenos Aires he would praise populism, especially of the economic variety, but in the European context, 'populist' is in media-terms synonymous with 'the next Hitler'

Clearly, the Marxist revolutionary is calling for a world revolution and not towards a revolution recognizing Christ the King who is both ruler of heaven and earth, and only through recognizing this and following Him, can man find any kind of peace, limited as it only can be in this world.

In all of his interviews,has he ever mentioned this truth?

In all of history, has there ever been a leader of the Catholic Church who blasphemies God almost daily, practices idolatry, teaches heresy, has absolutely no understanding of Sacred Scripture, despises Catholicism and Tradition and speaks the language of the Revolutionary in order to stir up the masses to agitate them into civil, and even, global war?