The Black Hand of the Madonna 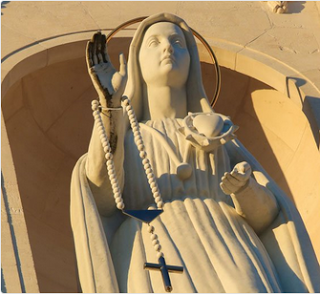 This month we commemorated the 100th anniversary of the apparitions, as well as the canonizations of Francisco and Jacinta.

I highly recommend this article, "Fatima's Gradual Descent into Darkness" by E.A. Bucchianeri at the blog Books, Blabble, and Blarney (May 17, 2017). It is a fascinating read about the site of Fatima written from the perspective of a devout Catholic who has lived in Fatima for the past fourteen years. He chronicles the architectural and liturgical abominations that have become ubiquitous at the site. He also chronicles some of the interesting sorts of observations that its hard to categorize and assign precise meaning to - for example, that the hand of the Blessed Virgin Mary statue at Fatima has become blackened with mold, the hideous "toothpick crucifix" and other things of this sort. I highly recommend this article; even if one does not adopt all the author's interpretations of the signs he is witnessing, one should at least be aware and give them some thought.

When I first saw the above mentioned article posted on social media, there were all sorts of skeptical comments to the tune of "You're reading too much into these occurrences" and "Don't be superstitious" and so on. I encountered similar comments when I posted an article noting that the ceremonial doves released by the Roman pontiffs as emblems of peace were frequently attacked and killed by crows ("Safe Place for a Dove", June 7, 2015). We could note a similar responses when people drew attention to the famous lightning strike at St. Peter's Basilica just hours after Pope Benedict XVI announced his resignation.

It is difficult for people to interpret such things. Most Catholics tend to default to two opposite extremes when confronted with potential supernatural signs, prophecy, etc - on the one hand, some have a tendency to seek too much exactitude out of these sorts of things, interpreting them as very clear communications, establishing elaborate timelines, and generally acting as if they possess the entire schedule of the eschaton down to the minute. One the other hand, you will have people who react against that sort of presumptuous precision and flee to the other extreme of supposing that nothing at all can be gleaned from such occurrences. These people almost take a Kantian approach to supernatural signs: God sends us supernatural signs and prophecy, but there is an unbreachable chasm between God's actions and our understanding of them. Sure, maybe God sends signs, but who can possibly interpret them? Therefore, it's best to just ignore them altogether.

As an aside, it was this frustration that led me to create the video "Shortcomings of Catholic Eschatology" on the USC Youtube channel. And no, my complaints about Catholic eschatology are not to be construed as an invitation for you to spam me with you utter rubbish about Maria Divine Mercy.

People inherently have a problem interpreting supernatural signs when prudence is required. They want to either throw prudence to the wind entirely, or apply it in excess. But Jesus calls us to moderation. He presents His signs in terms of natural phenomenon, like the coming of evening or the changing of seasons. Think of how we perceive these things, seasons, weather, etc. They are not matters of precision; jokes about the reliability of weather forecasts are ubiquitous. Predictions about the weather and the seasons are helpful for telling us the general direction in which we are moving, without too much precision. We would be foolish to put too much stock in a particular forecast; we would be equally foolish to ignore the general changing of the seasons altogether just because particular forecasts are not extremely precise.

This is why Jesus uses examples taken from the weather. “When it is evening, you say, ‘It will be fair weather; for the sky is red.’ And in the morning, ‘It will be stormy today, for the sky is red and threatening.’ You know how to interpret the appearance of the sky, but you cannot interpret the signs of the times" (Matt. 16:2-3). Jesus wants us to pay close enough attention to the signs of the times that we can say "A storm is coming,"  but he also wants us to be humble enough to realize we cannot figure it all out. It is sufficient to know the storm is on its way and to prepare accordingly. That is ultimately why God sends such signs.

The hand of the Madonna of Fatima has turned black.One calls to mind the message of Fatima about Our Lady using her hand to withhold the vengeance of our Lord. One prominent ecclesiastic has recently derided this idea as a "Mary of our own making", making fun of the idea of Mary as "one who restrains the arm of a vengeful God" and is "sweeter than Jesus the ruthless judge." This critique is much too simplistic; of course Mary is not "sweeter" than Jesus. Of course this is a false dichotomy; it is not as if Christ is ruthless judge and Mary is pure mercy. God's justice and mercy are perfectly in harmony, and insofar as Mary is the holiest saint, she too possesses perfect mercy and justice.

The point of the Fatima's teaching about Mary withholding the arm of Christ is not to establish some kind of distinction between a "sweet merciful Mary" and a ruthless Jesus. Rather, the purpose is to impress upon us that if Christ does come in judgment, it is because of our sins. And if grace is extended to us to forestall that judgement, that grace has come through the intercession of Our Lady.

These occurrences at Fatima may not "mean" anything; I file them away in my mind under "Interesting...note taken." But they are ominous. We live in ominous times.

Ominous, but not eschatological.

What jumps out at me about the canonization mass photo on the other blog is how extremely horizontal the layout is, as if they've taken great pains to close themselves in from anything vertical or transcendent. Very weird!

Is this the same traditional Catholic blog that used to play music in the background--Church of the poison mind---in reference to the Novus Ordo? I'm trying to remember which blog it is.

Mary, this blog has never played any music. You must be thinking of somebody else.

Congratulations! A nice combination of common sense and justifiable caution with respect to happenings such as those described above.

Hmmm, is there any other symbolism of a black hand in Catholicism? I tried to Google it, but I couldn't find anything.

The hand symbolism that readily comes to mind is the "writing on the wall" from the OT. As I recall, it was not a good omen.

This group was instrumental in the events that led up to World War I, which was also 100 years ago.

Re: Our Lord "v" Our Lady in terms of mercy and justice.

In his work "The Glories of Mary", St Alphonsus, quoting other saints, says that Our Lady is the Mother of Mercy because God the Father has assigned justice to the Son "Give your judgment to the king, and to a king's son your justice", and the office of compassionating the wretched to our Lady. However, St Alphonsus is also clear that it is an intercessory office.

Yes. This is a kind of pietistical statement that has to do with the office of our Lady's intercession. It is not a statement of absolute theological truth - as if Christ were devoid of mercy or something.

There is a vision I believe of a Saint shown Hell...where the hands of those who took communion in hand are black and singed.