The Many Faces of Catholic Social Teaching

For a long time, I belonged to a Facebook group called "Catholic Social Thought, Politics, and the Public Square." It has a very large following; chances are some of the readers of this blog probably follow this page. Here is the page: 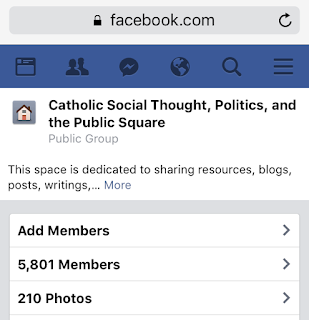 I've been a member of this group for a few years, but today I left it, after becoming exasperated with fruitless, circular arguments with liberal Catholic social justice warriors. When I initially joined the group, I'd hoped it would be a forum for exploring various aspects of Catholic social teaching, either in exploring teachings from the great encyclicals of Leo XIII, Pius XI and Pius XII, or discussing contemporary social problems in light of Catholic Tradition.


Unfortunately, this page was by and large a cesspool of progressive nonsense. I will explain briefly what I mean by this, but I want to preface by saying that it is amazing how Catholics can think "Catholic social teaching" can mean such radically different things. There seems to be multiple different strands of Catholic Social Teaching existing side by side, each claiming the same authority. It's very confusing.

At any rate, the stuff I encountered on this Facebook page was very much in the liberal-progressive bent. Here are some common traits of this strain of Catholic Social Teaching I gleaned from my few years interacting with these people.


Papal documents were cited profusely, but mainly documents of Paul VI, John Paul II, and Francis. I don't think I ever saw anything from Leo XIII cited, even when the people on the page were discussing matters relating to wages, labor, etc. Certainly no mention of Pius XI and Quas Primas and Christ's social kingship.

I am presuming my readers know what the "consistent ethic of life" position is, also known as the "seamless garment" argument. It essentially is a liberal talking point that says if you oppose abortion, you must also oppose the death penalty, war, and just about every situation where violence may be used. This "consistent ethic of life" idea was exaggerated to the point where every liberal talking point became a "pro-Life" issue, with the implication that one was not "really" pro-Life unless one supported the global climate change agenda, abolition of the death penalty, socialized health care, liberal spending programs, and everything else. Thus the "consistent ethic of life" became equivalent to the political program of liberalism by expanding to a ridiculous level.

I don't think I saw any articles against abortion - or if I did they were few and far between. But I did see a constant barrage of articles attacking Pro-Lifers. Essentially these critiques followed in along the lines laid out by Pope Francis of telling Catholics not to "obsess" over the abortion issue, as well as suggesting that Pro-Life Catholics were not "really" Pro-Life because they didn't do enough to promote social programs to help mothers and children - which is a point I deny, but that;s beside the point. This really ties in to the next issue on the false equivalence between Catholic Social Teaching and liberalism. Conversely, pro-Choice politicians such as Hillary Clinton are given a pass because of their liberal credentials.

This is actually something that is common to liberal thinking in general. Essentially, a social problem is identified. Liberals propose a solution solve to the problem. Then the equate their particular solution with the only solution, implying that only they really care about solving whatever problem they are discussing. Example: There are many unwed mothers struggling to raise their children in poverty. Nobody disagrees with this. The liberals put forward a characteristically liberal solution - taxpayer subsidized, government programs! Now, it must be admitted that this is only one proposed solution to the problem. There could be others. Reasonable people who all agree that poor single mothers need help can disagree on the most effective solution to the problem. Liberals, however, will go on to act as if their solution is the only solution, and those who do not support taxpayer funded government programs for low income mothers are attacked as not "really" caring about the issue. This is classic liberal false equivalence, and this manner of thinking is endemic among Catholic social justice warriors.

Essentially, working for Catholic Social Teaching is equated with the progressive "social justice" warrior. One gets the impression that these people really think secular-liberal "social justice" is the same thing as Catholic Social Teaching. I do not want to believe it is only because both concepts have the word "social" in them, but I am starting to think that is really it.  Essentially, there is no modicum of independent Catholic social action that is formed within an authentic Catholic framework. When considering social action, it is like they  can't conceive of a social action that is fundamentally distinct from liberal activism. Of course, this can happen with "conservative" Catholics as well, who can tend to make Catholic social teaching equivalent with free market economics and a  neo-con political program. But of course, the answer is not a pivot to the Left, but rather to escape the spectrum entirely with an authentic, independently Catholic social vision that is prior to and bigger than the stupid Left-Right spectrum of American politics. What we have on the Catholic Social Thought Facebook page is essentially some of the worst statements at the lowest level of dogmatic authority interpreted through a lens of liberalism.


It is truly amazing that people can have such huge divergent opinions of what constitutes Catholic Social Teaching, but such is the Catholic world we live in.
Posted by Boniface at 4:02 PM

"...but such is the Catholic world we live in."
All well written, just to say I hardly disagree with this statement.
Those who are not devoted and do not live the real and true Catholic Faith, may just wish to be called catholics, but they are not! A certificate of baptism makes people not Catholics.

Dear Unknown: Wait, "[a] certificate of baptism makes people not Catholics." Huh? Sacraments are efficacious. Baptism is a Sacrament. One can be devoted to their dog, or to Buddha, or to God. Proper formation, the gifts and fruits of the Holy Ghost begotten through the Sacraments, the practice of the virtues: by these are we brought to know Truth and Church teaching.

Of course baptism makes you Catholic in a formal sense. I think Unknown mean baptism alone does not make one a *good* Catholic

Thank you Boniface. We can see it this way. A Mercedes car is not really what he suppose to be when it have a Kia engine under the hood...
Who are for sure Catholics? Those in Heaven, the Saints and brothers and sisters in Purgatory. And of course the FAITHFUL ones of the Church militant. In the same time, we can say there are no Catholics in Hell.
If they were Catholics, they would never be in Hell.
Sadly, some of the souls who are lost for ever, have been once before, probably even more than just 'in formal sense' the Catholics.

Oh how lame. Unknown, seriously, please do NOT volunteer to teach a Catechism class.

"How lame...", you said? Then you prefer, for sure, such a 'feel-good' manner of teaching of fr. James Martin, and other heretics similar to him.

It is a dogma that their will always be sinners among the members of the Church. Catholic is not a term that should be equated with saint or good Christian.