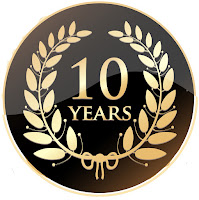 After nine years of meticulously observing the annual anniversary of this blog's establishment on June 29th of every year, this year on our tenth anniversary I got too busy and allowed June 29th to slip by me without any mention of this hallowed date.

Yes, it was back on June 29th, 2007 that this blog was first launched. Since then, we've published 1,137 articles on this blog - not even counting the 597 articles on the sister site. It has been viewed about 1.8 million times and consistently gets around 25,000 views monthly. It has grown beyond what I ever imagined. I remember when I was thrilled that 30 people read it one week.

Traditionally, on my anniversary posts, I would make some comments about the previous year, do a call out to the many contributors who help with the blog and website, and post some links to a few of my favorite posts from the last year. This year, being an especially momentous occasion, I kind of wanted to buck the norm and just offer a few general insights.

This past year has been a very challenging one for me personally, and I have had less time than ever for blogging. Ironically, the dramatic increase in professional (i.e., paid) writing opportunities has left me very little time for blogging, even though it was largely through the medium of this blog that I have learned to write. One does not publish 1,137 essays without picking up a little bit about writing as you go. Whatever professional success I have had with writing, I think a lot of credit must go to this humble blog for helping me get there. It's a sad irony that "getting there" has meant less time for the sort of casual, whatever-pops-into-my-head sort of writing that blogs were created for.

In many respects, I consider myself a sub-par, crummy blogger. I look at other successful Catholic blogs - many of them much newer than mine - and see them excelling me in every respect. I wish I posted with greater frequency and regularity. While I'm not at all ungrateful for the contributors I have had over the years (Noah, Maximus, Anselm, Kevin, etc), all of whom have their own busy lives, I wish had been able to maintain a more constant, regular working collaboration with other writers.

I wish I had the funds and time to update the aesthetics and functionality of the sister site. I wish I did not impulsively publish so much stuff that later leaves me thinking, "Hmmm...I probably should not have said that." I wish I wouldn't have published so much dumb stuff. I wish I was more professional with everything. I wish I had more time to engage my commentors, many of whom have been reading and commenting for years and years - C matt, Nate, Konstantin, Amateur Brain Surgeon, to name a few off the top of my head. You guys feel like old friends at this point.

I wish I had been able to make better collaborative friendships with some of my fellow Catholic bloggers, especially the traditional ones. For some reason, we've never really clicked...in some cases there has been open hostility, in others just...maybe I'm too distant? Ryan Grant has always been a close friend, though, and deserves special mention; I only started to gain traction back in 2007 when Ryan linked me on the sidebar of his old Athanasius Contra Mundum blog.

But then, there are other things I am very content with. I am content that I don't feel the need to offer a continuous running commentary on every piece of drivel that comes out of the Vatican. I am glad that I don't take this so seriously that I feel like I can't just get on here and rant. I'm thankful that my readership seems very forgiving of my stupidity. I will say something dumb and everybody will be on my ass about it for a week, and then the next week I'll write something else and everybody has forgiven me and it's as if nothing happened. I love my commentors. Even Lionel, in his own pathetic, ridiculous way. Some of you have been here for a very long time.

So...here's a toast to ten years of Unam Sanctam. In many respects they have excelled anything I ever imagined for this blog. In others, I feel like a failure. Who knows what future years will bring? Gracious Lord, bring some benefit, however poor, to someone from my meager efforts.

I feel very honored that you have mentioned me in your jubilee post. Your blog is one of the few sites I still read--and enjoy--regularly.

Boniface,
10 years !
You mentioned Prof. Robert Fastiggi in an interesting post on your blog.
Couldn't you talk to him about these links?

JULY 15, 2017
Boniface's premises are different from mine
http://eucharistandmission.blogspot.it/2017/07/bonifaces-premises-are-different-from.html

I think I've been here commenting for about five years. It's too bad I almost always use different and random names. Congratulations, Boniface.

You guys feel like old friends at this point.

You know what's funny, I originally turned on the captchas because years ago I was getting spammed by like, probably 20 auto generated comments per day that were all in some Chinese script. I kept the captcha on for about 5 years to deter them. Then, one day after years I tried turning the captcha off to see what would happen - and within *minutes* I started getting the Chinese spam comments again.

Bishop Athanasius' premises are the same as Boniface.

Bishop Schneider will not say that Pope Francis has made an objective mistake and violates the Principle of Non Contradiction
http://eucharistandmission.blogspot.it/2017/07/bishop-schneider-will-not-say-that-pope.html

^Yay! More irrelevant or only nominally relevant spamming links from Lionel. I'm also happy to say that in my 10 years of blogging I have never once clicked on one of your links, although I do occasionally tolerate you posting them.

Happy anniversary to you, also, my resident Internet troll

I appreciate the need for captcha - maybe I am getting old, but some of them are almost impossible to see clearly.