Oprah has ALL the answers! 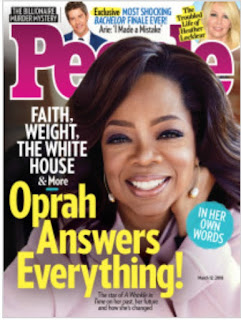 Back when I first started this blog, I spent a lot of time ripping on Oprah Winfrey. I later moved on to blogging about more weighty matters, but I have been meaning to get back to Oprah for awhile. In fact, I still have an active Oprah tag. For a quick synopsis of some of my previous work on Oprah, see the links below. A lot of these are old articles from my early days of blogging when I was more incendiary, but I still affirm the basic principles of enunciated in these older posts:


In fact, one of my old articles on Oprah's silly comments about God's jealousy even became the core of a chapter on the subject in my work on reconciling difficult Scripture passages, The Book of Non-Contradiction.

Back when I used to suggest that Oprah was prime material for the Antichrist, I only meant this in the sense that the false "feel good" religion she preaches would be of the same sort we would see peddled at the End of Times—as well as the fact that the kind of cultic influence she has on her followers would be of the same nature as the influence the Antichrist would wield. It was a comparison by simile.

However, following Oprah's speech at the 2018 Golden Globes - for which she was lauded with nothing short of idolatrous adulation - and the subsequent speculation that she would run for president in 2020 - I am starting to think that the comparisons I have drawn may be more than just simile.

I am not positively suggesting that Oprah Winfrey is the Antichrist, and there is always a bit of "tongue in cheek" present whenever I discuss this. But I do see the trajectory Oprah's career has followed, with the virtual mind-control she exerts over her followers and the uncritical praise she elicits from pop-culture, as something very much in the mold of the spirit of Antichrist—especially as her immense social capital begins to morph into political capital.
Posted by Boniface at 12:39 PM

It is natural for non-liberal Christians to speculate that the Antichrist will be the ultimate liberal, hippie, pantheist, earth-worshiping guru - as that is the spiritual deception of our times. But I remember a traditional Catholic (on an online forum) speculating that the Antichrist will actually be an extreme zealot for religion, a kind of pharisee that will go around wiping out all of the liberal degeneracy in order to bring godliness and righteousness back to the world - only he'll claim to be God himself and demand that he be worshiped.

Imagine it. A very charismatic, seemingly very pious and devout man, who goes around stamping out all heresies and enforcing religion all over the world; he brings in an era of unprecedented peace and prosperity - there has never been such material happiness in the world. He claims to be Christ having come back to earth, and informs us that we have entered the new world - we can worship him now and stop offering the sacrifice of the Mass, because the time for that sacrifice is over. If we refuse to worship him or insist on offering the Mass, then we are the godless and heathen ones and must be euthanised.

Seems either scenario is plausible. Hence, even the elect being fooled. Still, I have to admit I would be a little underwhelmed if it turned out to be Oprah.